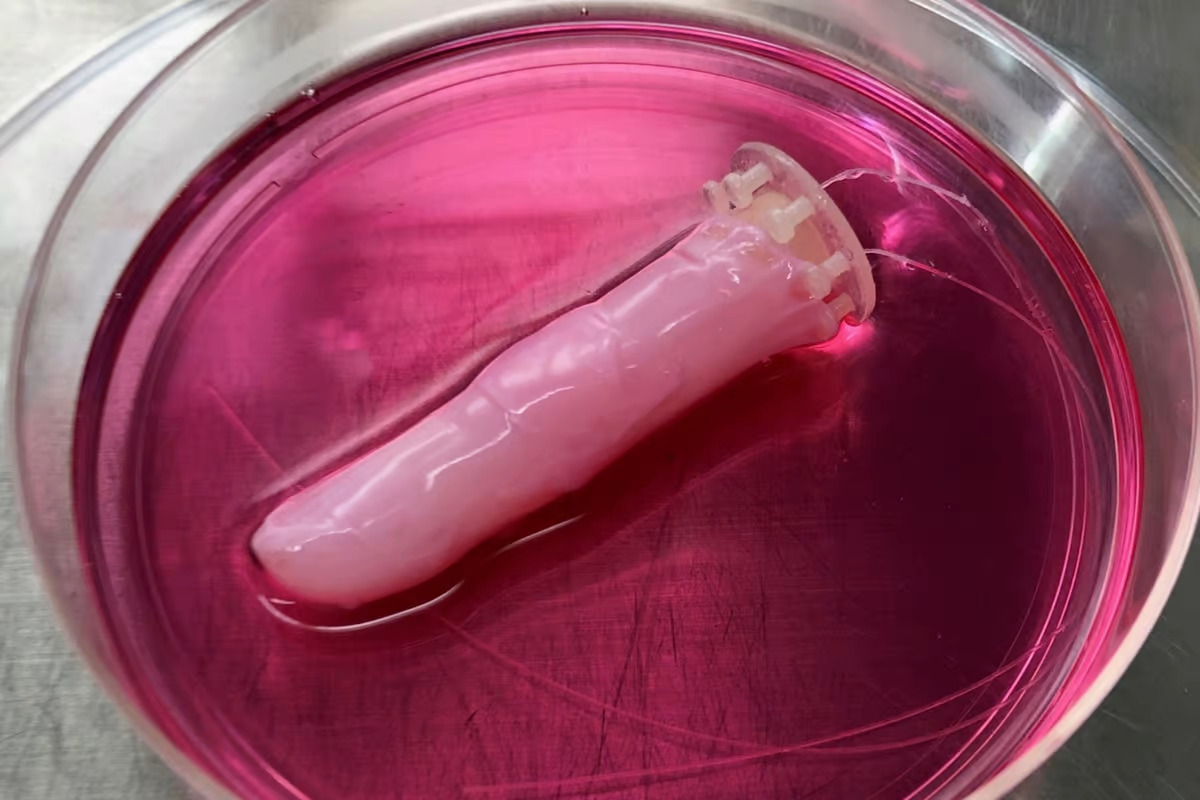 The three-jointed finger heals in a cell culture medium after its skin was intentionally cut.  Shoji Takeuchi

–
By Ben Coxworth
2022 Jun 09
–
We’ve been hearing a lot about synthetic skins designed for robotic hands, which would give the devices more human-like qualities. Well, scientists in Japan have gone a step further, by covering a robotic finger in a self-healing skin made from live human cells.

Led by Prof. Shoji Takeuchi, a team at the University of Tokyo started by building an articulated motor-driven robotic finger, capable of bending and straightening like its human counterpart. That finger was then submerged in a cylinder filled with a solution made up of collagen and human dermal fibroblast cells – these are the main components of our skin’s connective tissues.

Due to its natural properties, that solution shrank and conformed to the contours of the finger, forming a seamless hydrogel coating. Next, the scientists added a layer of human epidermal keratinocyte cells, which constitute 90 percent of our epidermis (the outermost layer of skin). These formed a moisture-retaining/water-resistant barrier on top of the gel, and gave the finger a more natural texture.

When the robotic device was subsequently tested, the skin was found to be strong and elastic enough to bend and stretch along with the finger, without breaking. What’s more, when the skin was cut and then covered with a collagen bandage, that bandage proceeded to gradually morph into the surrounding skin, thus healing the wound.

That said, the engineered skin is still much weaker than natural human skin, and has to be constantly supplied with nutrients in order to survive. The scientists plan on addressing these shortcomings, and on adding features such as fingernails, sweat glands, hair follicles, and even sensory neurons that would provide a sense of touch.

It is hoped that the skin could ultimately be used to make humanoid robots more lifelike and relatable to humans. The technology would also be ideal for performing tasks which require a gentle yet resilient touch, and for conducting skin research without resorting to animal testing.

“We are surprised by how well the skin tissue conforms to the robot’s surface,” said Takeuchi. “But this work is just the first step toward creating robots covered with living skin […] I think living skin is the ultimate solution to give robots the look and touch of living creatures, since it is exactly the same material that covers animal bodies.”

A paper on the project was recently published in the journal Matter.

Ben Coxworth
Based out of Edmonton, Canada, Ben Coxworth has been writing for New Atlas since 2009 and is presently Managing Editor for North America. An experienced freelance writer, he previously obtained an English BA from the University of Saskatchewan, then spent over 20 years working in various markets as a television reporter, producer and news videographer. Ben is particularly interested in scientific innovation, human-powered transportation, and the marine environment.
–
–
5 comments
Sign in to post a comment.
Please keep comments to less than 150 words. No abusive material or spam will be published.

This development might be huge for the anatomically correct “companion” dolls they sell for thousands of dollars. With real skin, the sky is the limit.