About 90 tons of methane an hour were released from the Raspadskaya coalmine in January, data shows 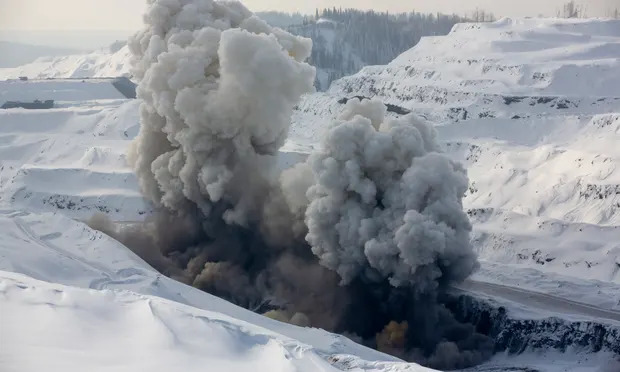 Blast at the Raspadskaya coal mine, Russia. Photograph: Bloomberg/Getty Images

– Fiona Harvey Environment correspondent
Last modified on 2022 Jun 15
–
Possibly the world’s biggest leak of methane has been discovered coming from a coalmine in Russia, which has been pouring out the carbon dioxide equivalent of five coal-fired power stations.
–

About 90 tons an hour of methane were being released from the mine in January, when the gas was first traced to its source, according to data from GHGSat, a commercial satellite monitoring company based in Canada. Sustained over the course of a year, this would produce enough natural gas to power 2.4m homes.

More recently, the mine appears to be leaking at a lower rate, of about a third of the highest rate recorded in January, but the leak is thought to have been active for at least six months before January’s survey.

The leak, which comes from the Raspadskaya mine in Kemerovo Oblast, the largest coalmine in Russia, is about 50% bigger than any other leak seen by GHGSat since it started its global satellite monitoring in 2016. The company believes it is bigger than any leak yet traced to a single source.

Brody Wight, director of energy, landfill and mines at GHGSat, said that methane was an often overlooked side-effect of coalmining that added to the climate impact of burning coal. The Raspadskaya leak would add about 25% to the greenhouse gas emissions of burning any coal produced from the mine, he estimated.

“We are seeing an increase in methane from this site generally, which could be the result of increased coal production, linked to global trends in coal use,” he said.

Russia is one of the world’s biggest sources of methane from fossil fuel extraction. The country’s gas infrastructure, including production facilities and pipelines, is notoriously leaky despite calls for the government to take action.

Paul Bledsoe, a former White House adviser to Bill Clinton and now with the Progressive Policy Institute in Washington DC, said: “Deeply cutting methane is the only sure way to limit near-term temperatures and prevent runaway climate change, yet every month brings new evidence that Russia is hiding the world’s most massive and destructive methane leaks. Putin is desperately hiding these enormous emissions so he can continue to profit from sales of Russian coal, oil and gas and fund his war-making regime. But those nations like China who continue to buy Putin’s oil and gas are equally abetting his climate and war criminality.”

All underground coalmines produce methane, which can cause explosions if it builds up. A blast at the Raspadskaya mine in 2010 killed 66 people.

Venting methane can be done for safety reasons. However, there are ways of capturing methane when it is produced at a high rate, or venting through oxidization, so that it causes less harm to the climate.

Methane is about 80 times more powerful as a greenhouse gas than carbon dioxide, though it degrades in the atmosphere over about 20 years. In February, the International Energy Agency warned that most countries were under-reporting their methane emissions, and the true amounts pouring into the atmosphere were far greater than had been thought.

Recent studies have shown that cutting methane could be one of the fastest ways of holding down global temperature rises, and that sharp cuts now could prevent a rise of about 0.25C by 2050.

Durwood Zaelke, the president of the Washington-based Institute for Governance, said the Raspadskaya leak showed the urgent need for action. “It’s critical to set up a comprehensive satellite monitoring system for methane. We also need to deploy a system of incentives and sanctions that can remedy these emissions, focusing first on the super emitters,” he said.

The IEA also found that at current high gas prices, the cost of capturing methane was far less than the value of using it or selling it as a fuel source, which should give companies and governments an incentive to capture the gas rather than venting or flaring.

At the Cop26 UN climate summit in Glasgow last November, more than 100 countries agreed to reduce their methane emissions by at least 30% by 2030. Russia was not among them, however.

GHGSat said it measured 13 distinct methane plumes, ranging in size from 658 to 17,994 kg an hour, from the mine. The discovery was made on 22 January, but the company took time to verify its findings and contact the operator of the mine, which has not responded.