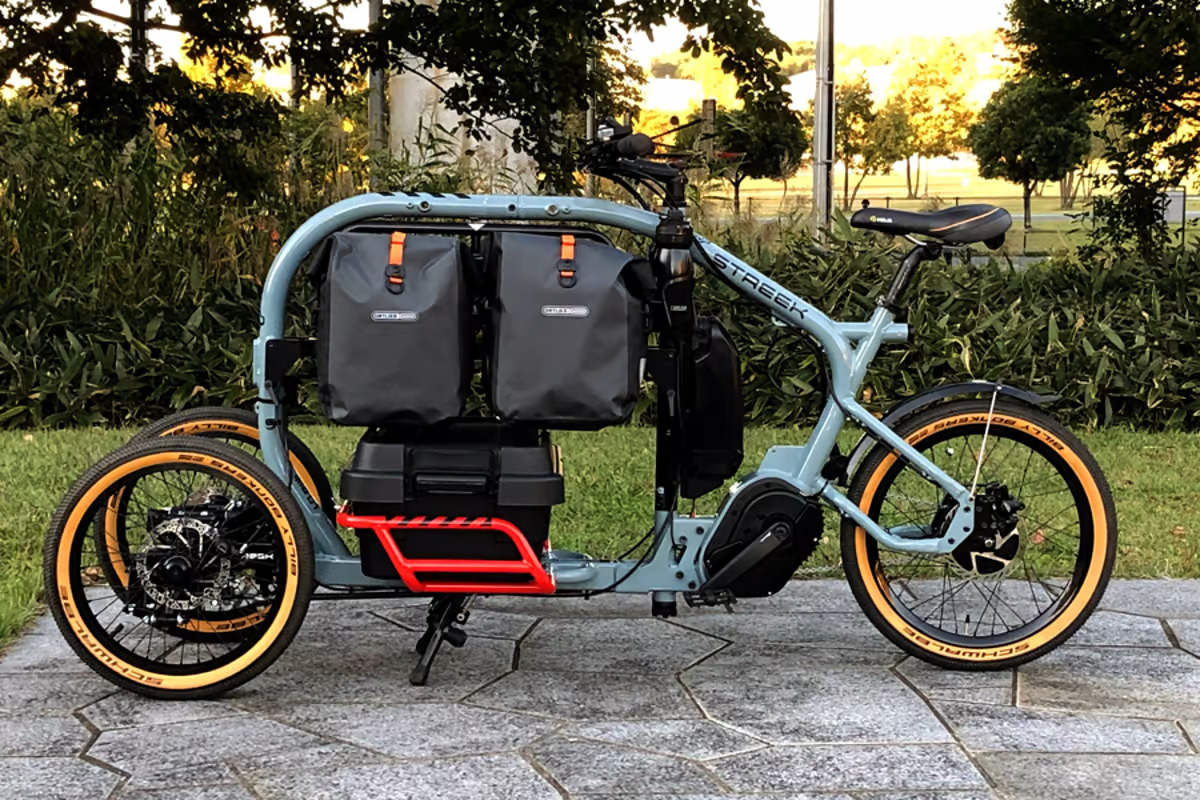 –
By C.C. Weiss
2022 Jun 17
–
If you can’t build out, build up. It works for city buildings, and a Japanese design firm is trying to make it work for city bikes. The Streek electric trike from Yokohama’s Envision Incorporated carries two levels of cargo inside a high-rise loop frame compact enough for tight city streets and paths. Like a smaller answer to the kei vans popular in Japanese micro-camper design, the Streek three-wheeler looks to be a practical load-carrying solution for high-traffic city centers where ground space is at an absolute premium.

Envision says it conceived the Streek, originally called the Stroke, as a way of kickstarting the cargo bike lifestyle in Japan. Looking at bikes from markets like Europe and the US, it realized that many existing foreign designs — this long-legged sled, for instance — were way too large to meet Japanese bicycle regulations, which the company cites as limiting bicycle and tricycle length to 190 cm (75 in).

Sizing an electric cargo bike or trike more like a traditional bike isn’t uncommon ground, but Envision definitely takes a path less traveled to get there. Bikes like the Tern Quick Haul and CERO One rely on racks and cargo-carry accessories outside the frame, but Envision creates an oversized aluminum “loop” frame with a high-rising top tube, horizontal bottom tube below hub level, and large interior space bounded on the sides by the steering and front tubes. The seat sits in back over the single 20-in rear wheel.

With a wide-open frame interior measuring 67 x 64 cm (26 x 25 in, L x H), Envision is able to go inside the frame for cargo storage, something we’ve only seen on rare examples like the pedal-free Feddz e-scooter. The designers are able to fit in not one cargo platform but two, using a removable high platform to augment the low platform and double up the load.

The frame design also allows riders to hang cargo, like panniers, off the top tube, and Envision is experimenting with potential accessories that could attach to the mounting points around the frame. Cargo can be as wide as 60 cm (24 in).

To prevent things from getting wobbly, Envision plants the front frame on two independently suspended tilting 18-in front wheels. The 250-W pedal-assist electric mid-drive helps riders muscle around loads up to a 60-kg (132-lb) maximum. With a 374-Wh battery mounted firmly to the steering tube, the e-drive offers a range up to 120 km (75 miles) in eco mode or 50 km (31 miles) in power mode, though we’re sure piling on 60 kilograms will take a bite out of those distances. Top assisted speed is 24 km/h (15 mph).

The Streek initially looked to us like a fanciful mockup from a design studio, but Envision has been hard at work on the project since 2016. It started with a couple more traditional-looking prototypes before growing out that gaping loop frame. It took the fourth prototype to various shows including Eurobike 2019, and introduced its fifth prototype, the T5, last year. The T5 is powered by a Nidec electric drive and pictured at the top of the article carrying four 10-L panniers and a 30-L storage box.

Envision describes the T5 prototype as close to production-ready, and it had initially planned on opening the order books in Spring 2022. However, in February it announced that it would have to delay production, owing to pandemic-related complications. It currently estimates retail price at ¥400,000 (approx. US$2,975), but that could change as quickly as the specs before production officially begins, assuming the project gets to that stage — conditions have not proven optimal the past couple years.

The quick clip below shows [the Stroke] an older Streek prototype in action.