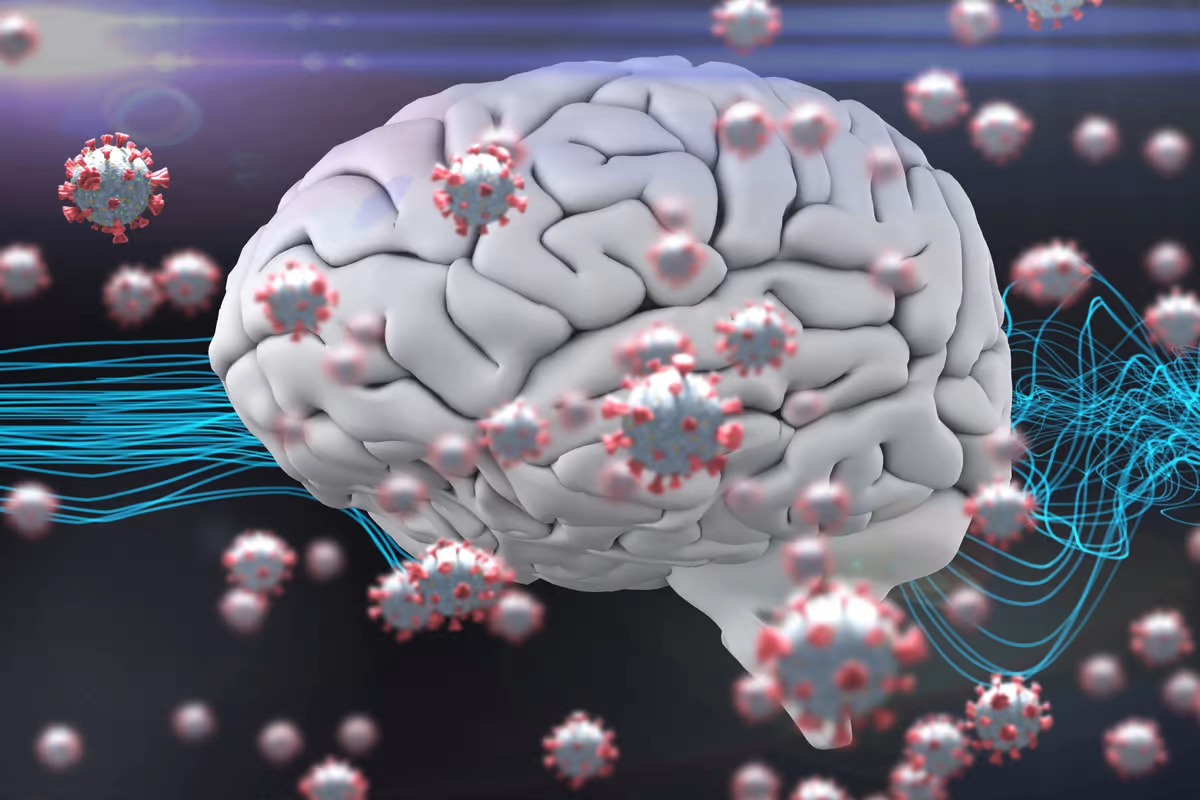 A new study has found distinct parallels between COVID-19 and Alzheimer’s disease.  vectorfusionart/Depositphotos
–
By Rich Haridy
2022 Jun 19
–
New research led by scientists from Australia’s La Trobe University suggests proteins generated by the SARS-CoV-2 virus can form into aggregations similar to those found in the brains of patients with Alzheimer’s disease. The researchers hypothesize this mechanism may underpin the persistent neurological symptoms such as brain fog seen in many patients suffering from long COVID.

Recent estimates from the Centers for Disease Control and Prevention (CDC) found approximately one in five adults may be experiencing some form of lingering symptoms from COVID-19. In the United Kingdom alone there are around two million people officially diagnosed with long COVID. The most prevalent symptoms associated with long COVID are neurological and can include fatigue, anxiety, headache, or more generally “brain fog”.

Many of these symptoms can resemble the earliest stages of neurodegenerative diseases such as Alzheimer’s or Parkinson’s, which has led some researchers to begin investigating the similarities between long COVID and neurodegenerative disease. A new study published in Nature Communications has presented evidence suggesting the virus that causes COVID-19 can generate protein aggregations similar to what is seen in the brains of patients with dementia.

Using a combination of computer modeling and in vitro experiments the research found two specific peptides generated by the SARS-CoV-2 virus can assemble into structures that resemble the aggregations of toxic amyloid proteins often seen in Alzheimer’s disease. Nick Reynolds, lead researcher on the project, said further work is needed to understand the effects of these protein aggregations in humans, but these early findings offer a plausible mechanism to explain the persistent neurological symptoms seen in long COVID patients.

“What we saw is that they formed very similar amyloid clumps, which are basically just ordered assemblies of protein that are stuck together and considered ‘molecular hallmarks’ of the early stages of neurodegenerative disease,” Reynolds said recently to the Sydney Morning Herald. “To cut a long story short, these amyloid plaques are very toxic to the brain cells and we hypothesize that aggregates of SARS-CoV-2 proteins may trigger neurological symptoms in COVID-19 that many of us call brain fog.”

Reynolds also raised the prospect of previously developed anti-amyloid medicines being used to treat long COVID. Although these kinds of experimental drugs have notoriously, and consistently, failed to improve Alzheimer’s symptoms in clinical trials, Reynolds says it is possible they could be effective in the context of long COVID.

“It may be possible that existing drugs may be used to treat the brain fog that affects a significant portion of people who go on to experience long-COVID having been infected with SARS-CoV-2,” he added.

The new research is not the first to suggest pathological similarities between Alzheimer’s and long COVID. A study published earlier this year looked at brain tissue from several deceased COVID-19 patients and found distinct parallels in brain damage with Alzheimer’s patients.

Lead researcher on that study, Andrew Marks from the Columbia University Vagelos College of Physicians and Surgeons, said it is too early to reach any conclusions from the findings but it is possible long COVID could be a novel kind of neurodegenerative disease.

“One interpretation of these findings is that long COVID could be an atypical form of Alzheimer’s and/or that patients who had severe COVID could be predisposed to developing Alzheimer’s later in life,” Marks said in February, “but much more research needs to be done before we can make more definitive conclusions.”

The new study was published in the journal Nature Communications.