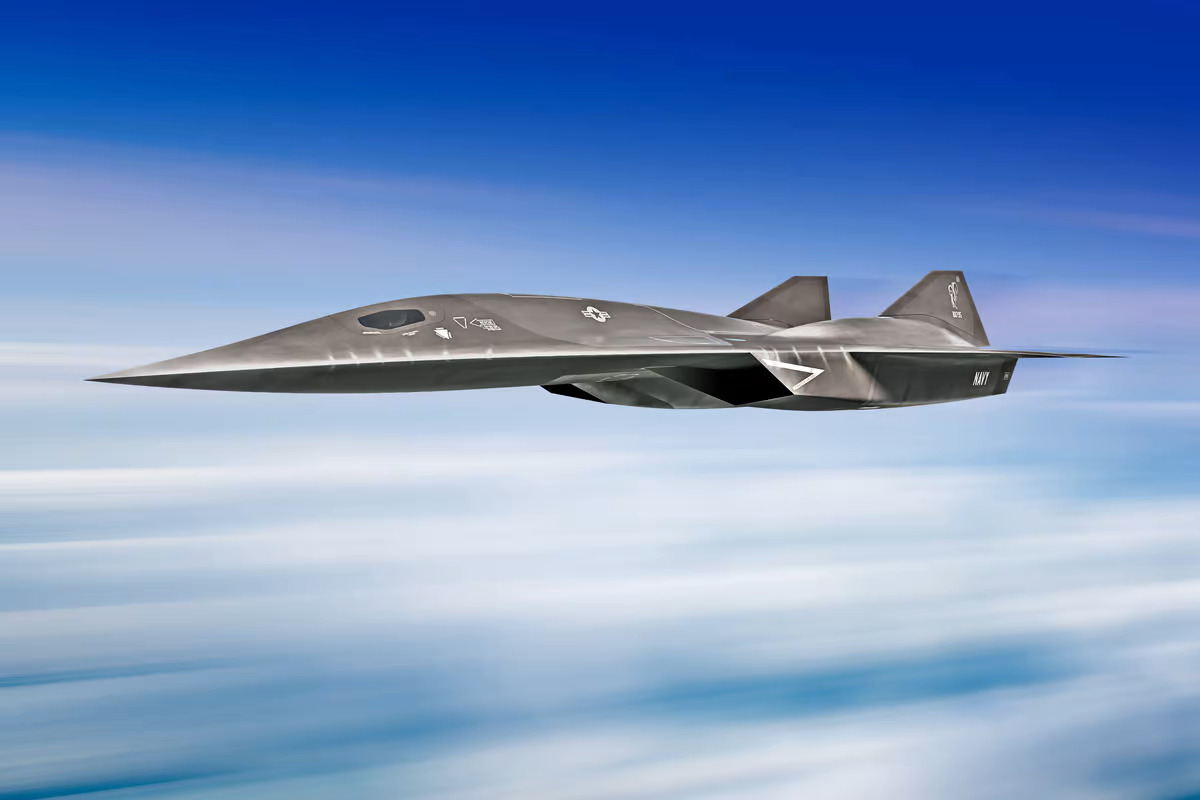 A render of the Darkstar jet in action.  Lockheed Martin
–

Without wanting to give away any of the plot’s specifics, the Darkstar aircraft features early in the film as Pete “Maverick” Mitchell (played by Tom Cruise) carries out his duties as a test pilot for the US Navy. The futuristic fighter jet is a jaw-dropping introduction to the hyperreal aesthetics of the film, but may also strike a familiar chord with aviation enthusiasts due to a likeness to one of history’s most revered aerial vehicles, the SR-71 Blackbird.

When looking for some expert assistance in creating the Darkstar aircraft, the film’s producers were pointed in the direction of Lockheed Martin’s Skunk Works division, responsible for the SR-71, its forthcoming successor the SR-72 and the U-2 spy plane. This collaboration created a new outlet for expression for Skunk Works clandestine conceptual designers, in the sense that this particular aircraft design was one they could share with the world – as conceptual designer “Jim” explains in this video.

The division’s engineers then turned these designs into a full-sized prototype aircraft with a structurally sound body and functional cockpit. The producer of the film says they lowered the aircraft a little to make it look sleeker and faster, but praised the “mind-blowing” design of the cockpit and compelling visuals it helps create in the film’s opening sequences.

You can hear more on the collaboration from the film’s producers in the video below.

Behind the Scenes of Top Gun: Maverick

4 comments
Sign in to post a comment.
Please keep comments to less than 150 words. No abusive material or spam will be published.
Ornery Johnson – 2022 Jun 24 – 09:41 AM
Despite some typical and obvious plot holes, I had a blast watching this movie in the theatre. Of course, it didn’t hurt that when the first Top Gun came out, I was 17 and brimming with testosterone. Tom Cruise has not underestimated the value of nostalgia to middle-aged Americans.
Towerman – 2022 Jun 24 – 03:16 PM
Top Gun 2 was good. Just some over the top impossible scenarios like bailing out at mach 10.5 where 1st would not be possible to pop the canopy without destroying the aircraft in a split second at that speed let alone survive the exit let alone get to the chute deploy stage.
As well as the “crater” bomb run and some fighting scenes..but that does not take away from the immersion, it being a movie starring Tom Cruise these scenes were done like this intentionally and his movies are always hair raising engaged action !
Overall most of the realism in there were well produced. They did an excellent job of getting a lot of things right.
The story itself with past characters and relics ie the Legendary F14 was great.
Very little to practically nothing except in the start about the F35 ! And nothing of the F22 !
How far in development is the sr-72 its been in the works for ages.
Lastly The danger zone song was needed more throughout the movie especially towards the end.
Overall excellent sequel !
TedTheJackal – 2022 Jun 25 – 05:40 PM
The elephant in the room with manned combat aircraft is that they’re G limited, while unmanned aircraft have max G set in the design phase. And it’s set at whatever lets an unmanned aircraft beat a manned one. No getting around it. That won’t stop the funding, but you won’t win a dogfight against physics.
Grunchy – 2022 Jun 26 – 04:16 PM
I approve of the movie tie-in with “Dark Star.” That movie showed both military incompetence & the futility of going to space (there’s nothing to do in space & there’s nowhere to go, either.)
–
–
Tweet