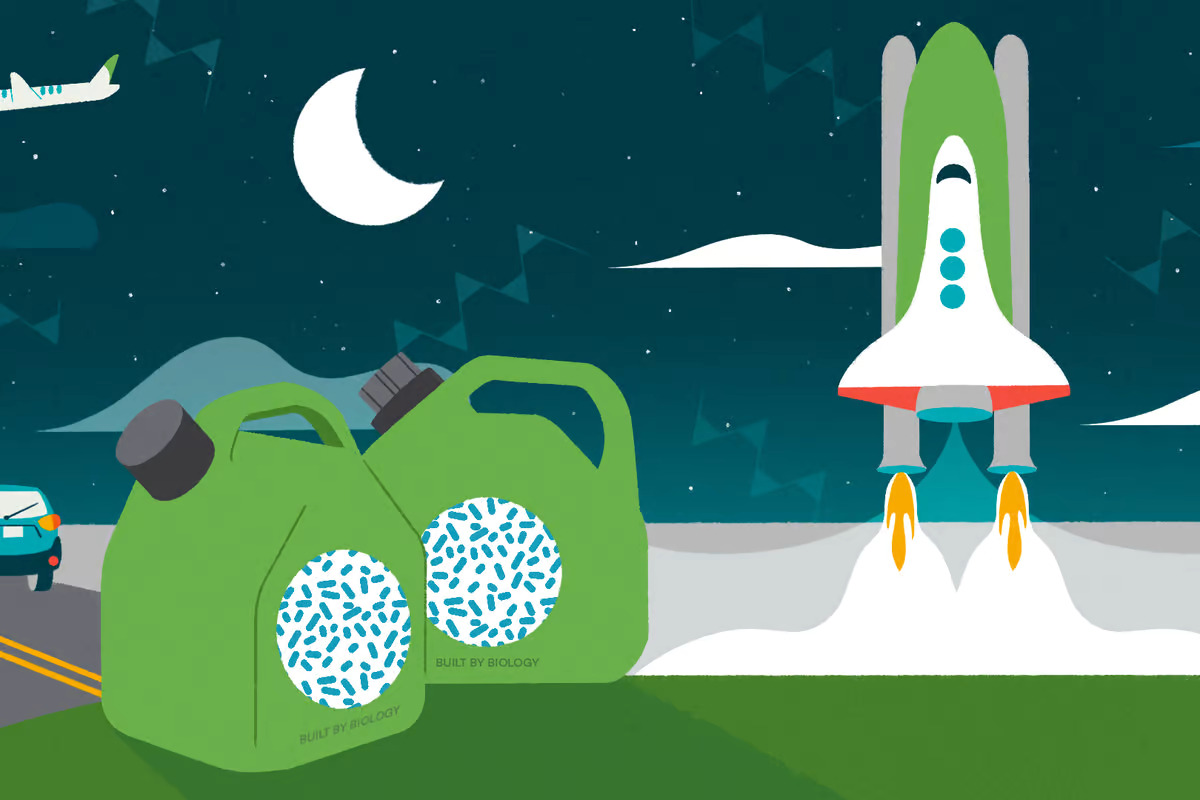 An artist’s impression of a new biofuel made by bacteria that could have a higher energy density than jet fuel.  Jenny Nuss/Berkeley Lab

The new fuel candidate molecules are known as polycyclopropanated fatty acid methyl esters (POP-FAMEs), and they’re made up of seven sets of cyclopropane rings. These are rings of three carbon atoms bonded into triangular shapes, which forces the bonds into a 60-degree angle. The strains of that sharp angle holds high potential energy that can be released during combustion.

The researchers identified natural cyclopropane-producing bacteria in a family called Streptomyces, then copied the associated gene clusters into other bacteria that are more lab-friendly. The end result was POP-FAME molecules that the team called fuelimycins, which only require one further chemical processing step to turn them into a ready-to-burn fuel.

Scientists at Sandia National Labs in Albuquerque then conducted computer simulations of the resulting fuels to estimate their properties compared to conventional fuels. This analysis suggested that the new fuels would be safe and stable at room temperature, and would have an energy density of over 50 megajoules per liter (MJ/L). That’s a huge increase over existing fuels – gasoline’s energy density is around 32 MJ/L, while common jet and rocket fuels top out around 35 MJ/L.

This increased energy density could help vehicles go farther on a single tank, or reduce the amount of fuel needed for rocket launches, saving more space and weight for cargo. At the same time, producing the fuels from bacteria cuts right down on their environmental impact.

“This biosynthetic pathway provides a clean route to highly energy-dense fuels that, prior to this work, could only be produced from petroleum using a highly toxic synthesis process,” said Jay Keasling, project leader. “As these fuels would be produced from bacteria fed with plant matter – which is made from carbon dioxide pulled from the atmosphere – burning them in engines will significantly reduce the amount of added greenhouse gas relative to any fuel generated from petroleum.”

Of course, these biofuels aren’t quite ready for use just yet. The team needs to find ways to make larger amounts so it can be tested in engines, by engineering the process in more efficient bacteria strains. They also plan to investigate ways to make molecules of different lengths for different purposes.

“We’re working on tuning the chain length to target specific applications,” said Eric Sundstrom, an author of the study. “Longer chain fuels would be solids, well-suited to certain rocket fuel applications, shorter chains might be better for jet fuel, and in the middle might be a diesel-alternative molecule.”