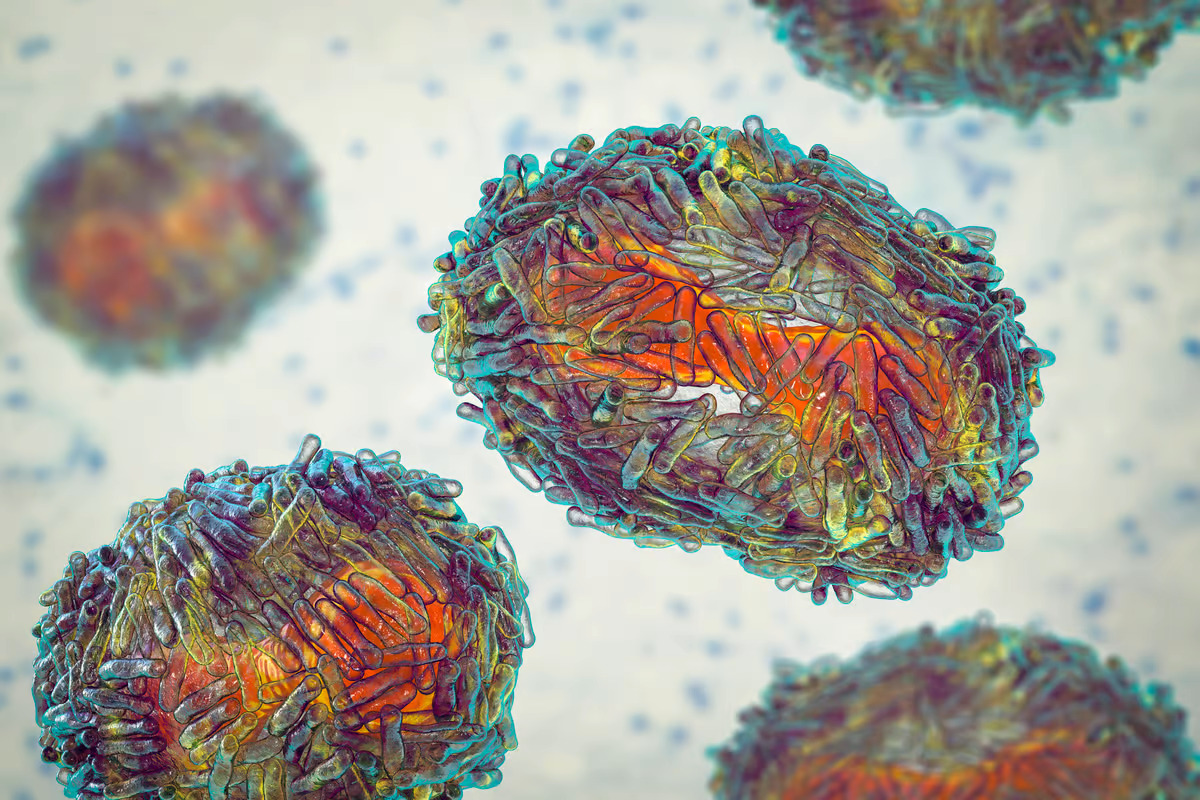 The monkeypox virus has acquired around 50 unique mutations at a rate scientists are suggesting is unexpected.  Depositphotos

In early May a case of monkeypox was confirmed in a UK resident who had recently returned from travel in Nigeria. By the end of the month dozens more cases had been identified across the world, from Spain, Germany and France to Australia, México and the United States.

The widespread nature of the spread was unprecedented. Despite being endemic in parts of Central and West Africa, monkeypox has never spread significantly across the world before, and scientists quickly began studying the genome of the virus to understand where it came from and how it could be different from what has been seen in the past.

Led by a team of scientists in Portugal, this new research studied 15 different viral samples from infected individuals. The first genomic link the research identified was a connection to a cluster of monkeypox cases identified in Israel, Singapore and the United Kingdom from 2018 and 2019.

Those cases had all been previously linked to travelers returning from Nigeria, and a genomic association was traced back further to a monkeypox outbreak in Nigeria from 2017/2018.

Perhaps the most unexpected finding in the new study is the revelation that the current strain of monkeypox seems to have undergone an unusually fast period of mutation. Lead researcher on the project, João Paulo Gomes, said one would normally only expect to see this virus accumulate a couple of new mutations per year but the iteration currently circulating seems to harbor around 50 novel mutations.

“Considering that this 2022 monkeypox virus is likely a descendant of the one in the 2017 Nigeria outbreak, one would expect no more than five to 10 additional mutations [when compared with the 2018-2019 imported viruses] instead of the observed about 50 mutations,” said Gomes in a commentary from vaccine charity Gavi.

The prevailing hypothesis is that the virus had been circulating undetected in an endemic country for several years between 2019 and 2022. The current global outbreak most likely arose from a single origin, and then was amplified by one or more super spreader events early in 2022 that caused the broad mass spread subsequently detected across April and May.

Speaking to MedPage Today, Gomes said many of the mutations currently being detected are associated with human immune system proteins. This suggests it is possible the virus has quickly adapted to human-to-human transmission.

“[M]ultiple mutations that we are seeing during the 2022 person-to-person transmission affect proteins associated with the human immune system, so it might mean a process of adaptation to humans,” Gomes said to MedPage Today. “And, yes, it seems to occur in a faster rate than expected, which is in line with the also unexpected observation of the excess of mutations of the 2022 [strain] when compared with its ancestor.”

Hugh Adler, from the Liverpool School of Tropical Medicine, said this new study underlines how little we know about the genetics of monkeypox, a virus that has been circulating for over 50 years. Adler also stressed it is too early to know exactly what the new mutations cited in the study mean for transmission or disease severity.

“The authors describe an unexpectedly high number of mutations in the virus, but their implications for disease severity or transmissibility are unclear,” explained Adler. “We have not identified any change in the severity of clinical disease in patients diagnosed in the current outbreak.”

As of the 24th of June 2022, there have been more than 4,100 cases of monkeypox reported in around 50 countries. The World Health Organization (WHO) recently convened an emergency advisory panel to evaluate the global situation.

While the panel did recognize the “emergency nature of the event,” it declined to recommend the WHO declare this outbreak a Public Health Emergency of International Concern (PHEIC). A PHEIC is declared by WHO when a novel disease is found to be spreading internationally and requires a coordinated global response to manage. There are currently two infectious diseases with a PHEIC declaration: polio and COVID-19.

The hesitation by the WHO to declare this monkeypox epidemic a public health emergency has been criticized by several infectious disease experts. Speaking to Science Insider, global health policy expert Alexandra Phelan questioned the purpose of the WHO’s emergency declaration policy if it is so slowly triggered when clear, novel infectious disease spread is occurring.

“This is the public health global alert mechanism and I worry what waiting a few weeks before sufficiently grabbing political attention will mean for community transmission,” said Phelan in an email to Science. “I think it is quite clear that the time has come to reconsider what the goal of PHEICs are and whether the criteria are fit for their purpose of alerting the global community and sufficiently equitable in an interconnected world.”

Raina MacIntyre, an infectious disease expert who has studied monkeypox in the past, said this new spread of the virus is “definitely unusual.” Alongside calling for global health authorities to do everything they can to halt the spread of this virus, she speculates that COVID-19 may be playing a role in the sudden emergence of this outbreak.

While waning immunity from past smallpox vaccinations may be a factor in the virus’s increased spread, MacIntyre wonders whether SARS-CoV-2 infections have impaired immune responses in people, making them more susceptible to infections from monkeypox.

“As people recover from COVID, their immune system is impaired,” MacIntyre wrote in a piece for The Conversation. “So people who have had COVID may be more susceptible to other infections. We see the same with measles infection. This weakens the immune system and increases the risk of other infections for two to three years afterwards.”

The new study was published in Nature Medicine.
–
–

Rich Haridy
With interests in film, new media, and the new wave of psychedelic science, Rich has written for a number of online and print publications over the last decade and was Chair of the Australian Film Critics Association from 2013-2015. Since joining New Atlas Rich’s interests have broadened to encompass the era-defining effects of new technology on culture and life in the 21st century.
–
–
5 comments
Sign in to post a comment.

Please keep comments to less than 150 words. No abusive material or spam will be published.
–
1stClassOPP – 2022 Jun 27 – 09:46 AM
Why is it called “monkey pox”? What actions set it in motion, why the caution that it’s transmitted by sexual activity between men? Lots of down to earth questions , and no explanation on how to avoid contracting this disease?
Karmudjun – 2022 Jun 27 – 11:06 AM

Nice article with good quotes. The science is still pending – did monkeypox lose it’s error checking proteins or did some international traveler enjoy Nigeria a little too much – managing to contract two or more strains of monkeypox during the incubation phase?
This is the first general public presentation of specific immune dampening effects of the wild SARS-CoV-2 infections and the wild measles infections – I only see references to a dampening of the immune system in misinformation articles attributing increased risk of infection to actual reduced risk of infection vaccines. Very clearly written – this is what we need for the general public – not that they’d believe the science over their own opinions!