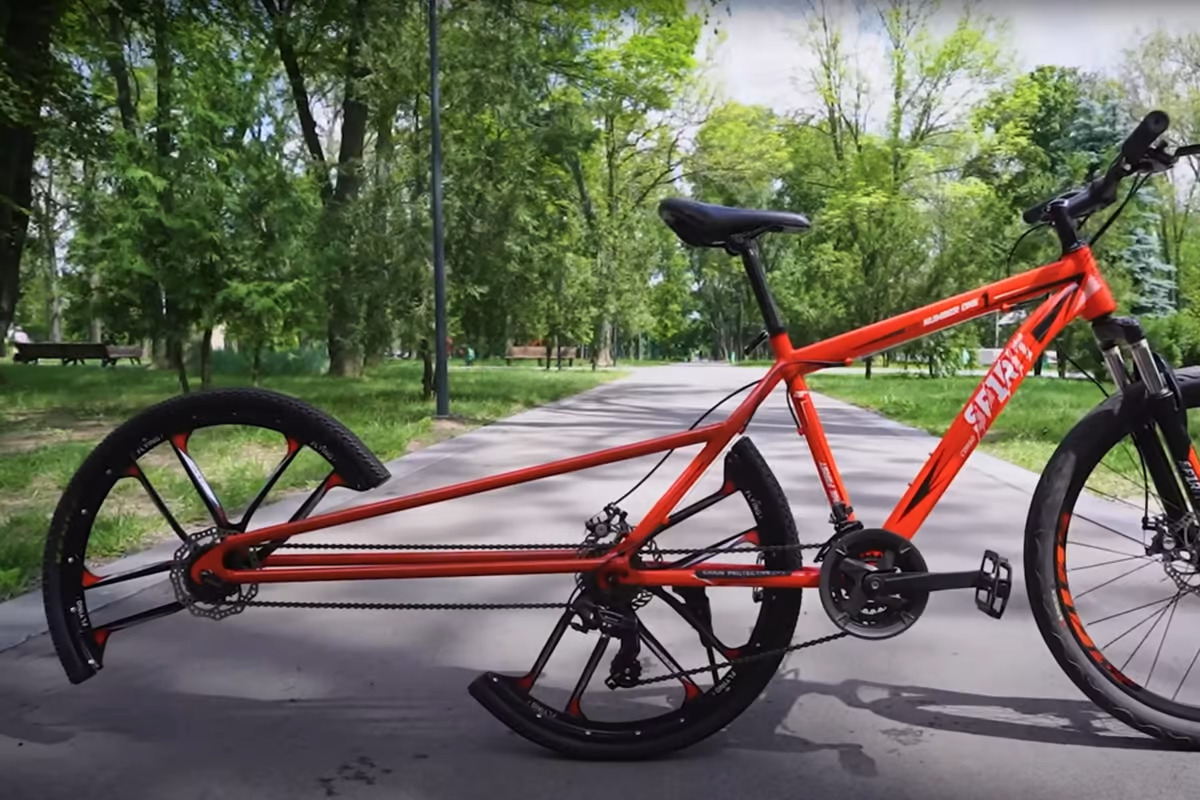 2022 Jul 04
–
Ukrainian YouTuber Sergeii Gordieiev, AKA “The Q,” has gone and done a very YouTubey thing indeed, rigging up a bicycle to ride with two half-wheels instead of a single rear wheel. Why? Well, because it looks absolutely bizarre rolling down the road.

Gordieiev seems to enjoy making weird bikes – you may have seen previous videos in which he replaced a bike’s wheels with giant circular saw blades and rode it around on a frozen lake, or created wheels made out of shoes on poles, or built a hubless bike, or replaced the chain drive with a bevel gear, or built shock absorbers into the wheel spokes for truly unique suspension, or made his own airless tires out of PVC piping …

The list goes on, and his latest effort adds another fine bullet point, splitting the rear wheel into two halves and running one half behind the other, adding an extra rear triangle that extends from the back of the bike. This takes no small amount of faffery, but Gordieiev has built a successful business out of such faffery and is talented enough on the tools to make it all work.

For starters, he saws a couple of rear rims nearly in half, keeping the hubs intact, then he cuts tire sections to match. He recreates the inner tube using what looks like some PVC pipe, eventually popping bungs in each end. Refitting the disc brake and rear sprocket, he puts the first half-wheel back on the bike, then sets about welding the extended rear triangle onto the back.

From there, it’s a matter of keeping the wheels in sync to make sure there’s always a half-tire touching down when the other’s lifting up. This he achieves with a second chain running between the two rear wheels, and then he fits it all up with the two wheels locked in opposite orientations throughout the rotation.

And voila: a machine that looks absolutely absurd, but is clearly rideable, even if dropping off a curb now gives you three solid bumps on the backside instead of two. It’s all in the name of weirdness, and on that metric, The Q has excelled himself.

Enjoy the video below.