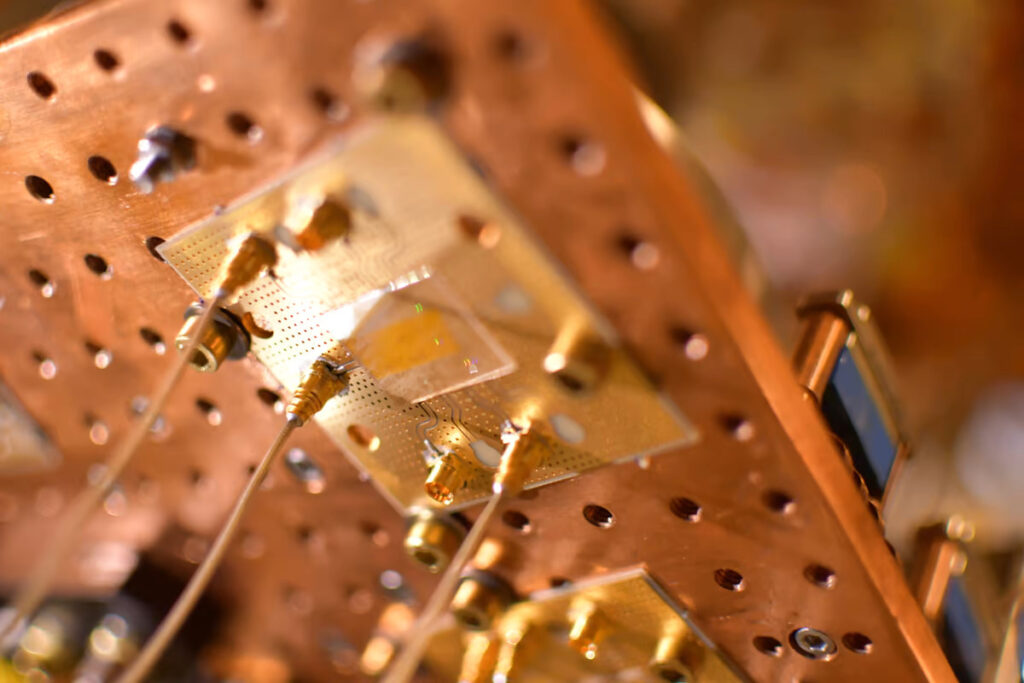 2022 Jun 29
–
Traditional computer chips run on electricity, while the emerging photonic chips use light. Now, scientists at Harvard have demonstrated a new kind of chip that transmits data in the form of sound waves.

Computer chips and circuits send and process data by modulating a particular medium. Most of the time that medium is electrons, the flow of which is modulated by components like transistors to encode data as ones and zeroes – high or low current. More recently, photonic chips have been developed that modulate photons of light and send them down narrow channels called waveguides to transmit data around the chip.

The new acoustic chip works in a similar way to the latter, only with sound waves instead of light waves. The team fashioned a modulator out of a material called lithium niobate, which changes its elasticity in response to an electric field and produces acoustic waves. By carefully adjusting that field, the modulator can control the phase, amplitude and frequency of the acoustic waves, encoding data in them before sending them down waveguides.

The team says that acoustic wave chips have a few potential advantages over those that use electromagnetic waves. They’re easy to confine to the tiny waveguide structures, they don’t interfere with each other, and they interact strongly with other parts of the system they’re used in.

With this first active acoustic wave chip functional, the team is working on building more complex acoustic wave circuits, and investigating how to connect them to quantum computer components such as superconducting qubits.

The research was published in the journal Nature Electronics.

Michael Irving
Michael has always been fascinated by space, technology, dinosaurs, and the weirder mysteries of the universe. With a Bachelor of Arts in Professional Writing and several years experience under his belt, he joined New Atlas as a staff writer in 2016.
–
–
3 comments
Sign in to post a comment.
Please keep comments to less than 150 words. No abusive material or spam will be published.
stevendkaplan – 2022 Jun 29 – 05:13 AM

I’m sorry but I don’t see how this has any practical use. Unless the place the chip is in is totally soundproof wouldn’t any loud noise in the area run the risk of potentially messing up the data? Seems impractical for the real world.

paul314 – 2022 Jun 29 – 06:04 AM
Signals in such a chip would travel at the speed of sound in the material rather than close to the speed of light? It could be that in modern chips, electronics signal speed is already dominated by switching, charging and discharging, so that the difference isn’t so great. Or maybe the designers just don’t care.
Username – 2022 Jun 29 – 10:00 AM
This chip’s grand daddy was called a modem!
–