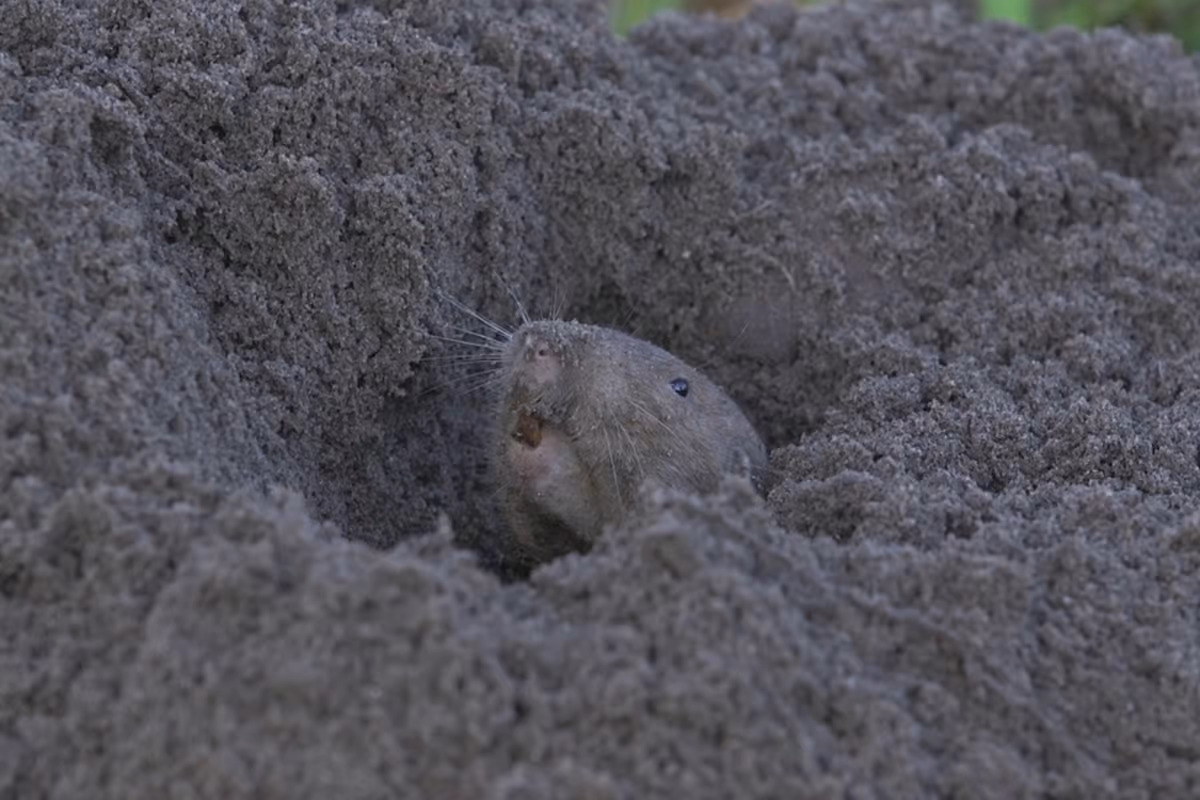 Rarely seen above-ground, a pocket gopher peeks out of one its tunnels.  Veronica Selden/University of Florida

Their diet consists mainly of plant roots, which they access within those tunnels. Doing all that digging is a lot of work, though – enough so that scientists from the University of Florida wondered if the creatures would use up more energy digging than they would get from eating any roots they just happened to find while tunnelling.

An alternative scenario suggests that as plant roots grow through the roofs and walls of tunnels that have already been dug, the gophers just revisit those tunnels to eat the roots on an ongoing basis. The plants survive the loss of those relatively small lengths of their roots, and in fact benefit from nutrients in feces which the gophers spread within the tunnels. They thus grow more roots which extend back into the tunnel again, presenting a new “crop” for the gophers to harvest.

In order to test the latter theory, Prof. Jack Putz and zoologist Veronica Selden blocked gopher-access to sections of tunnels located beneath plants at an outdoor property. They did so by taking 50-gallon (189-l) drums with the ends cut off, then sinking those drums cookie-cutter-style into the soil around the plants, forming an impenetrable underground cylinder that contained part of the tunnel. This didn’t harm the gophers, as they still had plenty of roots to eat in other tunnels.

With the roots now protected from being eaten, the scientists proceeded to measure the rate at which they grew into the tunnel, and thus the rate at which they provided food energy. The researchers determined that while eating regrown roots in existing tunnels would give the gophers enough energy to gradually extend their tunnel networks as needed, the animals would definitely not get enough food energy if the only roots they ate were those that they discovered as they were digging.

That being said, the scientists do admit that there are differing opinions as to whether or not what the pocket gophers are doing can actually be considered farming.

“If farming requires that crops be planted, then gophers don’t qualify,” said Putz. “But this seems like a far too narrow definition for anyone with a more horticultural perspective in which crops are carefully managed – such as fruit trees in forests – but not necessarily planted.”

Gopher pulls an entire plant down by the roots into its tunnels.  Norm Douglas
–

–
A paper on the study was recently published in the journal Current Biology.

Ben Coxworth
Based out of Edmonton, Canada, Ben Coxworth has been writing for New Atlas since 2009 and is presently Managing Editor for North America. An experienced freelance writer, he previously obtained an English BA from the University of Saskatchewan, then spent over 20 years working in various markets as a television reporter, producer and news videographer. Ben is particularly interested in scientific innovation, human-powered transportation, and the marine environment.
–
–
2 comments
Sign in to post a comment.
Please keep comments to less than 150 words. No abusive material or spam will be published.
TechGazer – 2022 Jul 11 – 03:00 PM
By their definition, cows and sheep count as farmers too, since the plants they graze get fertilizer, reduced competition from their neighbors, and for some plants, distribution of their seeds. Ants that actively spread and feed fungi seem a better fit for the definition of “farmer”.
I think it’s more likely someone looking for media attention.
ScienceFan – 2022 Jul 11 – 05:06 PM
Farfetched. Not that different from grass growing taller around cow dung.