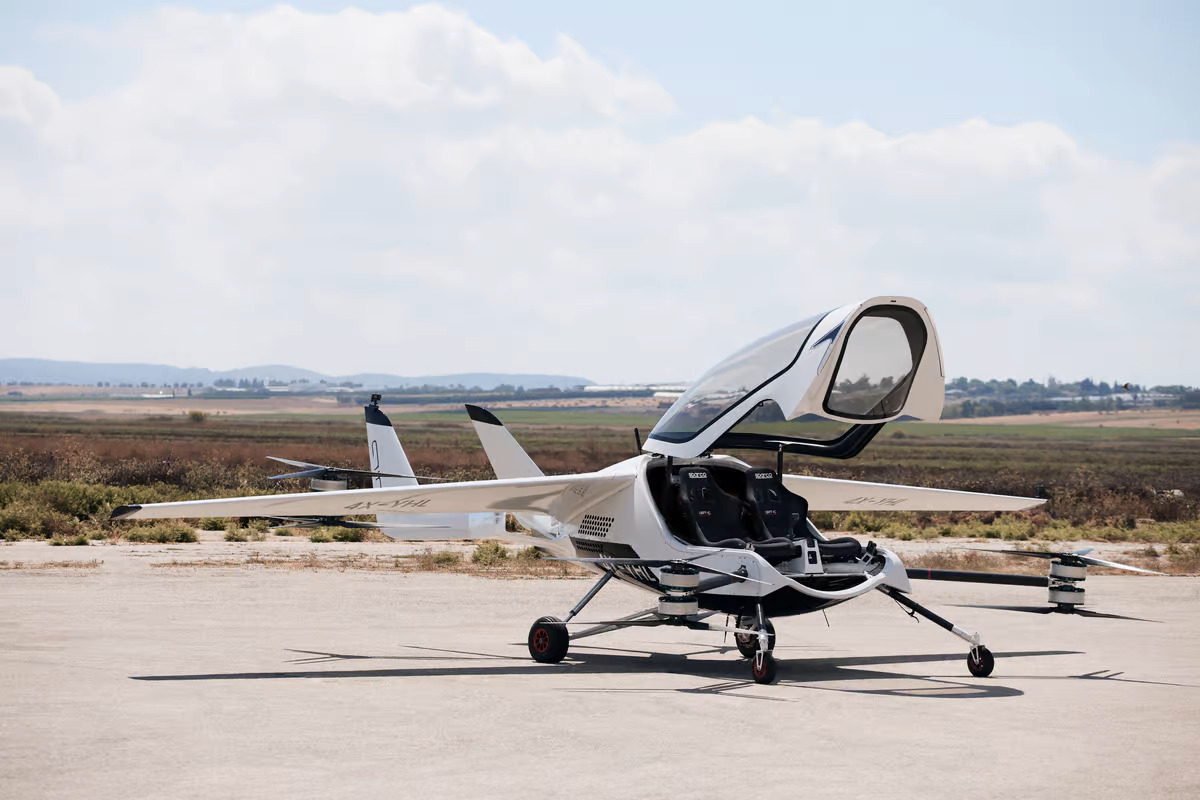 The full-scale Air One prototype prepares for takeoff, with its flip-top canopy open.  Air EV –

By Loz Blain
2022 Jul 12
–
Cleared for airworthiness, Air’s first full-scale eVTOL prototype has started flight testing. The Air One is an attractive two-seat manned multicopter with wings, designed for personal ownership and fun flight dynamics, with a US$150,000 price tag.

Things are proceeding quickly for this Tel Aviv-based company. Emerging from stealth nearly a year ago, Air unveiled its full-scale prototype for the first time a couple of months ago at the Kentucky Derby, having flown a number of smaller-scale prototypes of its design. Now, the full-size machine is airborne and testing is underway.

While it might look like a winged plane, or a lift & cruise-style eVTOL, the One is really an eight-prop coaxial multicopter with a slight twist in the form of two rather heavily-slanted wings. Without a dedicated forward propulsion system, this thing tilts to fly like any other multicopter. It has no fully wing-borne efficient flight mode – nor indeed any control surfaces on the wings – but when it’s fully tilted forward at speed, the wings contribute some lift to take some stress off the props and the powertrain.

The full-scale prototype, weighing 868 kg (1,914 lb), made its first flight in a field in Megiddo, Northern Israel, back on June 21. This was a simple tethered hover, nothing too exciting, and the company has had it airborne several times over the last few weeks. Well, nothing too exciting for most people; the Air team goes berserk in the video below, dishing out champagne showers and ice bucket dumps for the cameras like they’ve just won the Superbowl. To be fair, we’ve been known to do that kind of thing around the New Atlas office when somebody posts a really good story too.

“It was truly awe-inspiring to watch Air One lift off the ground for the first time,” said Rani Plaut, CEO & Co-founder of AIR, in a press release. “We’ve been on this upward journey for nearly five years and cannot wait for the public to join us on this ride. This momentous milestone secures Air’s spot as a market leader in the personal air mobility space, making the thrill of flight achievable on a daily basis. We look forward to continued growth as we launch into the next phase of development.”

At a base price of $150,000, it’s some 50 percent more expensive than, say, the Jetson One. But you get 100 percent more seats and three times the flight range, plus a funky-looking flip-top cabin with a windscreen and everything. We’re not seeing any cup holders, but we’ve been surprised in the past. Air says it’s already sold more than 150 of them, with certification and the first customer deliveries both expected in 2024.

5 comments
Sign in to post a comment.
Please keep comments to less than 150 words. No abusive material or spam will be published.
Robt – 2022 Jul 12 – 08:55 AM
Looked reasonably stable while hovering; more so than some other
‘first flights’ I’ve seen.
It’s about the price of a well made LSA, so if enough people are prepared
to substitute range for versatility, low noise, and let’s be honest, a certain
wow factor, then there’s the market.
Not sure re certification timeline though; most of the eVtol manufacturers
seem to be a bit optimistic in that regard.
MQ – 2022 Jul 13 – 12:43 AM
Looks cool, but merging wings with multicopters are a bit pointless if there is not variability in either the thrust line or the Angle of Attack of the wings, because, the aerodynamics of the 2 systems are reversed, ie, max forward speed with fixed thrustline of the multirotor propulsor gives minimum, or negative lift…
HokenPoke – 2022 Jul 13 – 01:25 AM
@MQ i agree it would have to be flown in a finely balanced way for optimal efficency. But moreover winged designs just does not fit in with the exact definition and ourpose of an evtol.

And evtol is supposed to be more manouvarble than a helicopter as well as have a lesser footprint so it could land almost anywhere not forced to use airports.

A winged concept takes both these distinguished features away.

The least these winged concept “Evtols” should have is an in flight folding wing or drop the wings entirely.

Wings will become obsolete anyway as power sources gets improved with time.

And, I would submit the theory that the likelihood of any novel enterprise succeeding is inversely proportional to the irritability of the backing music on their promo videos.