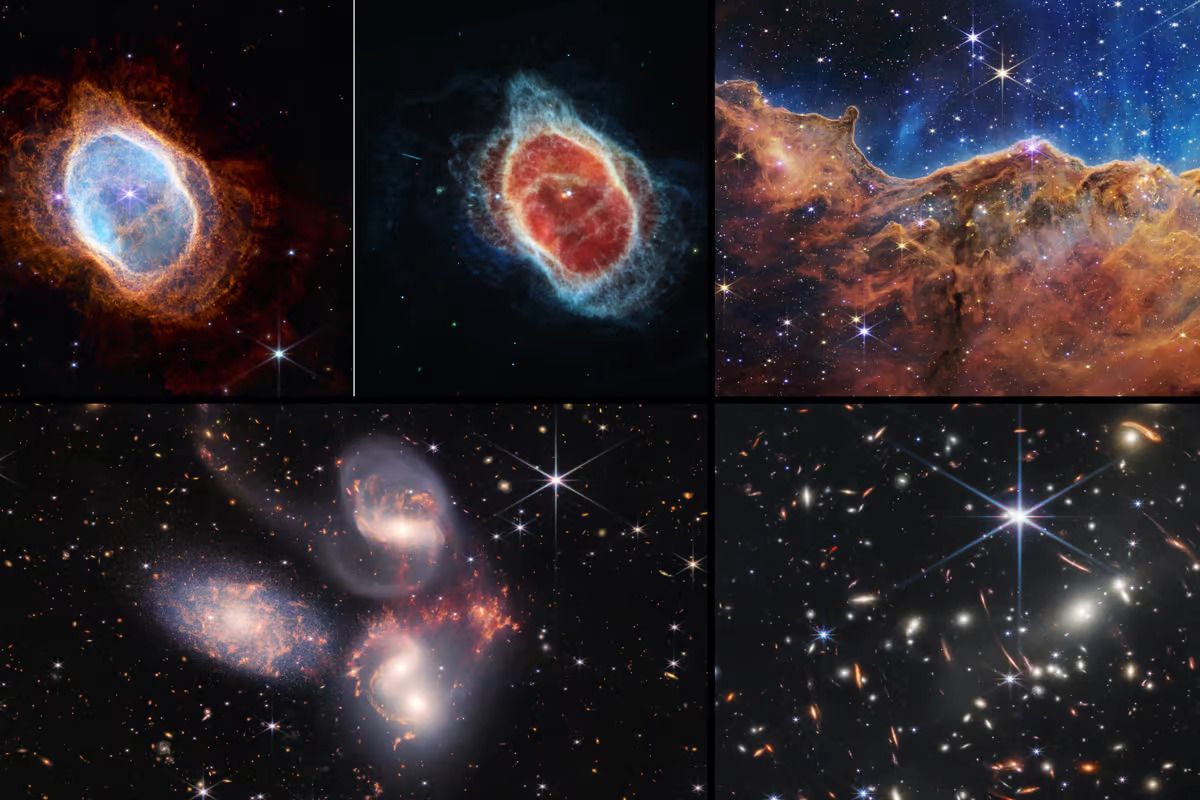 –
By David Szondy
2022 Jul 12
–
In what promises to be the beginning of a veritable torrent of science, NASA has released the first batch of images from the James Webb Space Telescope, including a gravitational lens effect, the water signature of a distant exoplanet, the death throes of a star, a cluster of galaxies, and “cosmic cliffs” where stars are born.

The four images and a spectrogram released by NASA demonstrate not only the advances in space telescope technology since NASA’s Hubble Space Telescope was launched in 1990, but also the tremendous scientific potential of an instrument that can probe farther into space and back in time than has been previously possible.

Launched on December 25, 2021 atop an Ariane 5 rocket from ESA’s Centre Spatial Guyanais in French Guiana, the long-delayed and sometimes controversial James Webb Space Telescope has at last been fully commissioned and is beginning its science mission to explore deeper into the universe’s origins than has been possible up until now.

The James Webb was conceived in 1996 as the successor to the Hubble and was originally scheduled to launch in 2007, but suffered delays right up until a week before its eventual launch. In addition, the cost of the giant instrument ballooned from US$1.6 billion to over US$10 billion.

The spacecraft is now on station at about one million miles (1.5 million km) from Earth. It doesn’t orbit any celestial body, but a sector of space called Lagrange 2 (L2) point. This is one of five sites where the gravitational forces of the Earth and the Sun balance out. This gives the infrared telescope a stable position for its planned 10-year mission and avoids delicate instruments facing the glare of the Sun or the Earth.

The first of the images was released yesterday as a teaser at a televised briefing attended by President Biden, Vice President Kamala Harris, and NASA Administrator Bill Nelson. This was followed today by the release of the other images plus an exoplanet atmosphere profile as a demonstration of the capabilities of the telescope. These were selected by representatives from NASA, ESA, CSA, and the Space Telescope Science Institute with more to follow in the near future.

“Today, we present humanity with a groundbreaking new view of the cosmos from the James Webb Space Telescope – a view the world has never seen before,” said Nelson. “These images, including the deepest infrared view of our universe that has ever been taken, show us how Webb will help uncover the answers to questions we don’t even yet know to ask; questions that will help us better understand our universe and humanity’s place within it.

“The Webb team’s incredible success is a reflection of what NASA does best. We take dreams and turn them into reality for the benefit of humanity. I can’t wait to see the discoveries that we uncover – the team is just getting started.”

The very first image, which was released during a briefing attended by US President Joe Biden on July 11, looks at first glance like a strangely distorted image. It is, in fact, the result of the James Webb using the gravitational field of a cluster of galaxies 4.6 billion light years from Earth to act as a gargantuan lens to produce what NASA calls the deepest and sharpest infrared image of the distant universe so far. Despite looking at a field that is about the size of a grain of sand held at arm’s length, the telescope was able to build up the color composite image in only 12.5 hours instead of the weeks needed by the Hubble for much less resolution. The result is the ability to see objects 13.1 billion light years away, giving a window into the very earliest era of the universe.

WASP-96b is an exoplanet in the constellation of Phoenix about 1,150 light years from Earth. With a mass less than half that of Jupiter and a diameter 1.2 times greater, it isn’t that different from many of the over 5,000 confirmed exoplanets that have been uncovered in recent years, but its large size, short orbital period, puffy atmosphere, and lack of contaminating light from objects nearby in the sky made it an ideal subject for studying the atmosphere of planets orbiting other stars. In this case, the JWST made its first detection of water, providing scientists with a new tool for seeking out planets in our galaxy that may harbor life.

Side-by-side comparison showing observations of the Southern Ring Nebula in near-infrared light (L) and mid-infrared light (R).  NASA, ESA, CSA, STScI
–
–
A pair of images from the Webb’s Near-Infrared Camera (NIRCam) on the left, and the Mid-Infrared Instrument (MIRI) on the right, highlight the Southern Ring Nebula found in the constellation of Vela at a distance of about 2,000 light years from Earth. The two stars at the center of the nebula are in a tight orbit around one another and the fainter of the two is a dying star that is ejecting clouds of gas and dust into space. The James Webb has, for the first time, provided evidence that the second star is also ejecting gas and dust, giving new insights into the evolution of stars.

Another cosmic evolutionary clue is Stephan’s Quintet, a cluster of five galaxies in the constellation of Pegasus between 40 million light-years and 290 million light-years away. Many of the stars in the cluster are relatively young and there is a supermassive black hole 24 million times the mass of the Sun in the center of one of the galaxies. This makes Stephan’s Quintet very special because it resembles many clusters seen in the early stages of the universe and their complex interactions can shed a great deal of light on how galaxies evolve.

Last but not least is the image of the “Cosmic Cliffs” in the Carina Nebula. Located in the Carina constellation, it’s 8,500 light years from Earth and its spectacular appearance is matched by the ability of the James Webb to peer through dust to reveal objects like this that were once hidden from view. The nebula is home to young, hot stars that have carved the vicinity with ultraviolet rays, leaving behind peaks and valleys. By studying such places, the telescope will provide scientists with new insights into how stars form and the mechanisms that not only induce star formation, but also inhibit it.

These images provide a tantalizing preview of what’s yet to come from the JWST.

–
David Szondy
David Szondy is a freelance journalist, playwright, and general scribbler based in Seattle, Washington. A retired field archaeologist and university lecturer, he has a background in the history of science, technology, and medicine with a particular emphasis on aerospace, military, and cybernetic subjects. In addition, he is the author of a number of websites, four award-winning plays, a novel that has thankfully vanished from history, reviews, scholarly works ranging from industrial archaeology to law, and has worked as a feature writer for several international magazines. He has been a New Atlas contributor since 2011.
–
–

2 comments
Sign in to post a comment.
Please keep comments to less than 150 words. No abusive material or spam will be published.
FB36 – 2022 Jul 12 – 02:52 PM
JWST is surely a great achievement/success but let’s also realize that it could have easily failed for so many different reasons (& cause a huge blow to all future funding of astronomy)!
& by the way, it is actually possible to make so many small/cheap telescopes work together as a single vastly more powerful super-giant telescope, by using optical interferometry tech!
Not to mention, realize that, then, all risks of failure would be greatly distributed & diminished!
ArdisLille – 2022 Jul 13 – 08:12 AM