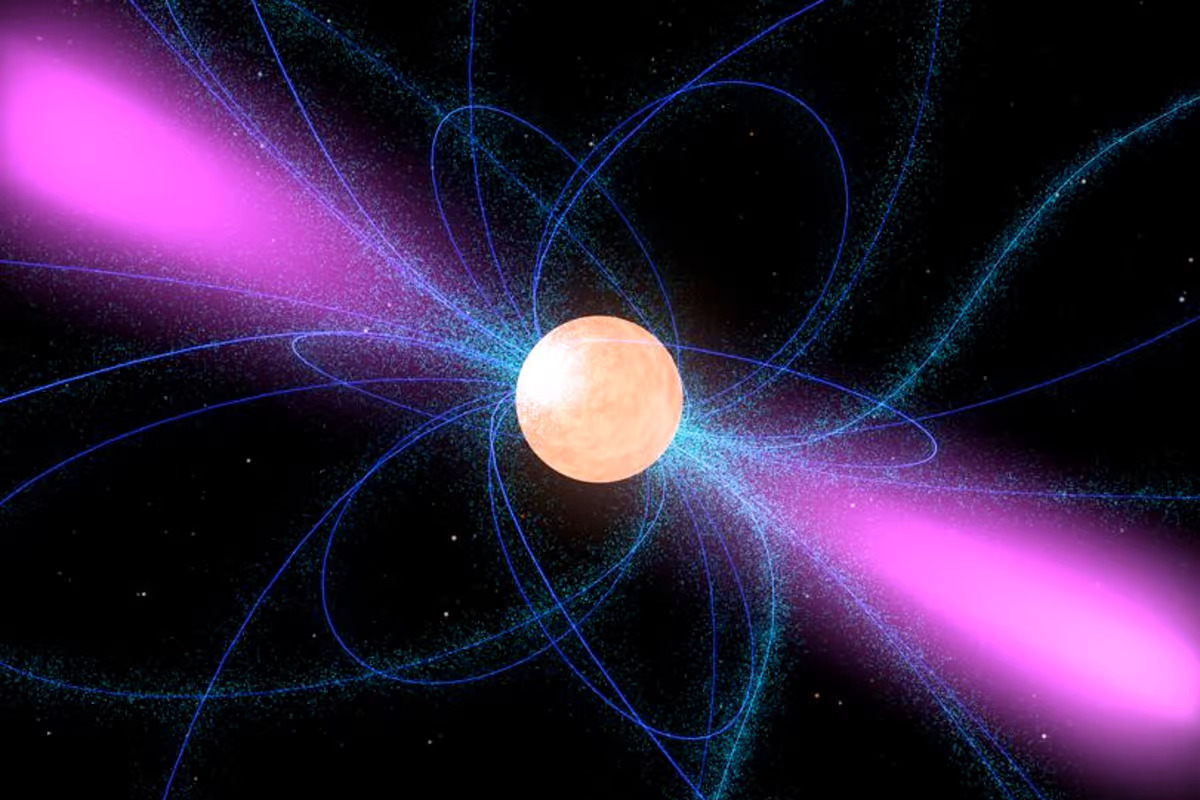 Artist’s concept of a pulsar.  NASA
–

The newly crowned record-holder is a binary star system known as Swift J0243.6+6124, in our home galaxy. This pair consists of a neutron star that’s slurping gas off its companion star, forming a disk of material around it. Plasma in this disk falls along the magnetic lines to the neutron star’s surface, which releases huge flares of X-rays. Because the star is spinning, these flares seem to pulse from our perspective. Take all that together, and you’ve got a specific type of neutron star known as an X-ray accretion pulsar.

And this one is particularly bright, earning it the extra adjective of “ultraluminous.” That brightness was long thought to correlate with a stronger magnetic field, but until now there hadn’t been any direct measurements of an ultraluminous X-ray accretion pulsar’s magnetic field.

Astronomers can measure the magnetic field of these objects by studying their X-ray spectrum. Electrons from the plasma will absorb some of the X-rays and scatter others, creating a fingerprint that can be used to calculate the strength of the magnetic field.

Using the Chinese X-ray astronomy satellite Insight-HXMT, the researchers used this method to calculate the magnetic field for Swift J0243.6+6124, and found it to be an incredible 1.6 billion Tesla. That’s the most powerful magnetic field ever detected in the universe by a huge margin – the previous record-holder was another pulsar with 1 billion Tesla, reported by the same team in 2020. For reference, the strongest magnetic field ever created here on Earth is a modest 1,200 Tesla.

While this may be the strongest magnetic field measured directly, it’s not likely to be even close to the strongest in the universe. That honor belongs to a different type of neutron star called a magnetar, which is estimated to have a magnetic field of up to 10 billion Tesla.

The research was published in the Astrophysical Journal Letters.