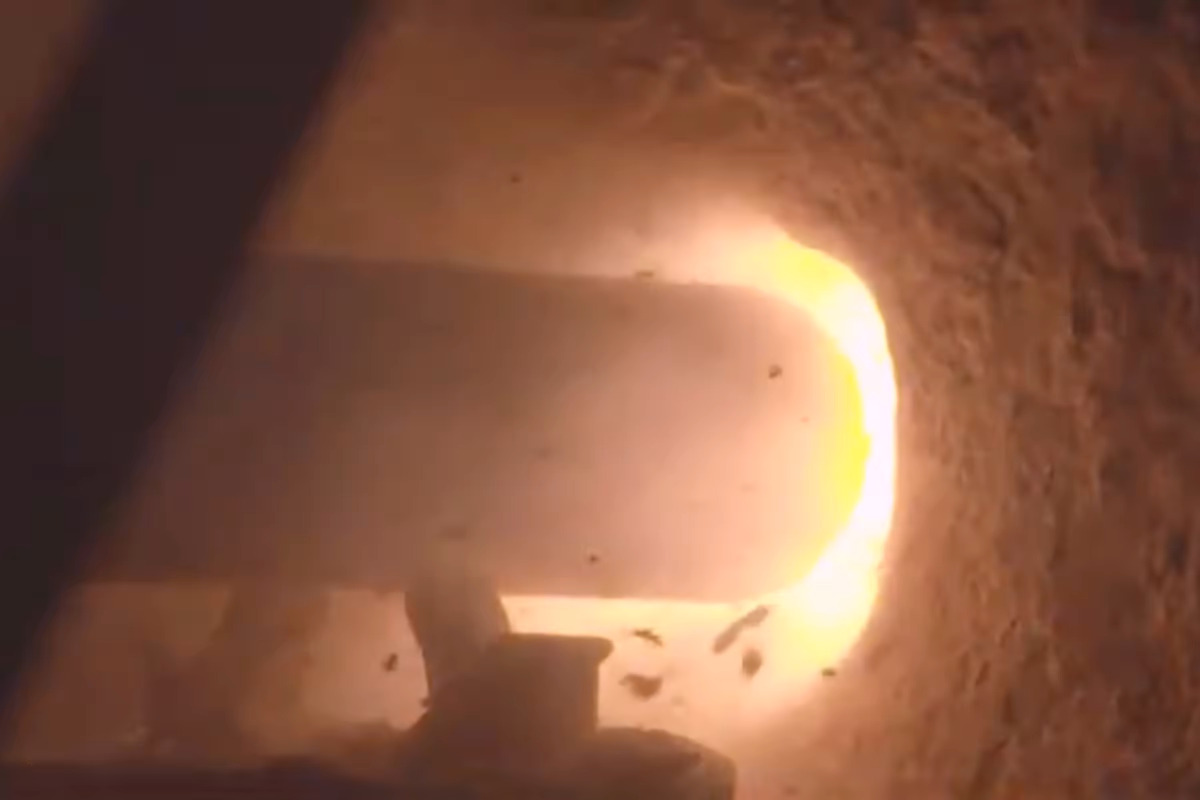 –
By Loz Blain
2022 Jul 20
–
Bay Area startup Earthgrid says it’s developing a plasma boring robot that can dig underground tunnels 100x faster and up to 98% cheaper than existing tech, and it plans to use it to start re-wiring America’s energy, internet and utilities grids.

Most tunnels dug today are made by massive, mechanical rotary boring machines, which scratch cutting wheels against rock and evacuate the debris behind them, lining the tunnel walls as they go. It’s painstakingly slow, hugely expensive, and the cutting heads and drill bits often need changing or maintenance.

But there’s another way to get through the toughest rock – as we outlined in our January article about Petra’s thermal drilling robot. Blasting rock with high temperatures can fracture and vaporize the stone in a process called spallation, and blasting this damaged rock with high pressures causes it to flake, chip and blow away.

You can do this without touching the rock walls at all, so the equipment can do entire tunnels without stopping if necessary. It can run entirely on electrical power, opening up the possibility of entirely emissions-free drilling, and both Petra and Earthgrid claim it’s much, much faster and cheaper than doing things mechanically – to the point where previously unfeasible projects can become economically viable.

Earthgrid doesn’t seem to be as far along as Petra – indeed, it’s operating on pre-seed funding at the moment. But its intellectual property takes a spallation boring robot like Petra’s to the next level, placing multiple 27,000 °C (48,600 °F) plasma torches onto large discs held out in front of a “Rapid Burrowing Robot (RBR).” The torches are arranged in a Fibonacci spiral, starting from the center and widening out until they cover the full diameter of the bore.

Where Petra’s thermal drilling robot moves its head around to widen its hole, the RBR will fire on all torches at once, and rotate the torch-bearing discs to ensure full coverage, blasting the rock backward and collecting it into small pushcarts, each connected along the cable supplying electricity to the drill rig.

That cable will need to handle some serious juice. In estimations submitted as part of a patent, Earthgrid founder Troy Helming describes a potential embodiment of the concept using 72 plasma torches to drill a 1-meter (3.3-ft) bore. In its low-power state, with each torch consuming 500 kW, Helming estimates a total power draw of 40 megawatts. If you need to get cracking, the high-power state would draw as much as a constant 120 MW.

That’s for a hole you can barely crawl through; to triple the diameter and create a utility-sized tunnel you can comfortably walk through on a flat floor, you’d need to attach a larger “mother rig” behind the front rig. And if you wanted to move to a 10-m (33-ft) tunnel you could put a couple of lanes of traffic through, you’d need to attach another, even bigger “father rig” behind that.

The total power draw in a “stage 3” system like this could get as high as 1.38 gigawatts – but that’s by no means the limit; upgrading the torches to higher power units would get the job done considerably faster, if an even more epic amount of electricity becomes available.

In a high-speed configuration, Earthgrid claims it can tunnel up to 1 km (0.62 miles) per day, which it says is up to 100 times faster than existing borers. For reference, Elon Musk’s Boring Company has designed its porpoising Prufrock mechanical tunneling machine to do 0.24 km (0.15 miles) a day – although it says its medium-term goal is to get Prufrock up closer to 1.13 km (0.7 miles) per day. Mind you, on its debut, drilling a 3.2-km (2-mile) tunnel under Las Vegas Convention Center, it managed just 15 m (49 ft) per day.

As to cost, well, Earthgrid says a low-cost configuration could come in at as little as US$300 per meter (3.3 ft) of tunnel. “We are so much less expensive,” reads the company’s website, “due to far lower operating costs (no need to change out drill bits & cutter heads multiple times daily, much lower energy consumption, robotics = far fewer workers, no drilling mud and/or drilling chemicals to dispose of, easier spoils removal, sale of our spoils for road & concrete manufacturing, etc.)”

The company says it’ll either sell drilling as a service, or build, own, operate and maintain tunnels for customers looking for a long-term lease or toll arrangement. But it also hopes to put enough interlinking customer projects in place to create a subterranean network spanning the entire contiguous USA. If power cables of sufficient capacity were run through this network, renewable energy could potentially be distributed across the country, matching demand surges on the east coast with production surges on the west coast.

Earthgrid might look like a long-shot startup operating out of a warehouse next to a gym in Richmond, but founder Troy Helming has some form as an entrepreneur – at least, according to his own LinkedIn page. He founded and acted as CEO for Tradewind Energy, turned it into a billion-dollar “unicorn” and sold it – it would later become the #1 wind energy developer in the USA. He was then the founder and CEO of Pristine Sun, which developed small utility-scale and community-scale solar power plants, and he sold that at near-unicorn status as well with some US$750 million in projects.

He’s also got some experience with the competition; he spent two years at Arcbyt before it was renamed Petra. And the gym next to the Earthgrid warehouse? He’s Chairman of the Board there too, among a number of other projects.

Earthgrid is moving toward a seed funding round, and as such, not a ton of information is available on its current status. But in another LinkedIn post, Helming shared some progress news: the company has been “approved as a utility in New York, Florida, and Washington (state). We now have preferred and streamlined Rights of Way access for our tunnels in 12 states … equipment is arriving in Richmond CA next month to start building our 1st multi-torch Tunnel Boring Robot … We hope to be boring tunnels later this year for customer revenue … We’ve moved back into our office and industrial R&D/testing/warehouse space in Richmond CA, and we’re upgrading the power capacity to have >6,000 amps at 480 volts (lots of power).”

At this point, we have to acknowledge the bro-tastic tint to some of Earthgrid’s current communications. “Imagine a robot with ten lightsabers on the front,” says Helming in a promotional video, “kinda vaporizing through the rock and soil, and then a Mandalorian jetpack on the back blowing out little cornflake-sized bits of rock.” The company’s two business models are called BADASS (Boring and Drilling as a Simple Service) and BOOM (Build, Own, Operate & Maintain). Maybe VCs love this stuff, who knows?

We look forward to learning more about this project as it progresses. Check out a video below.