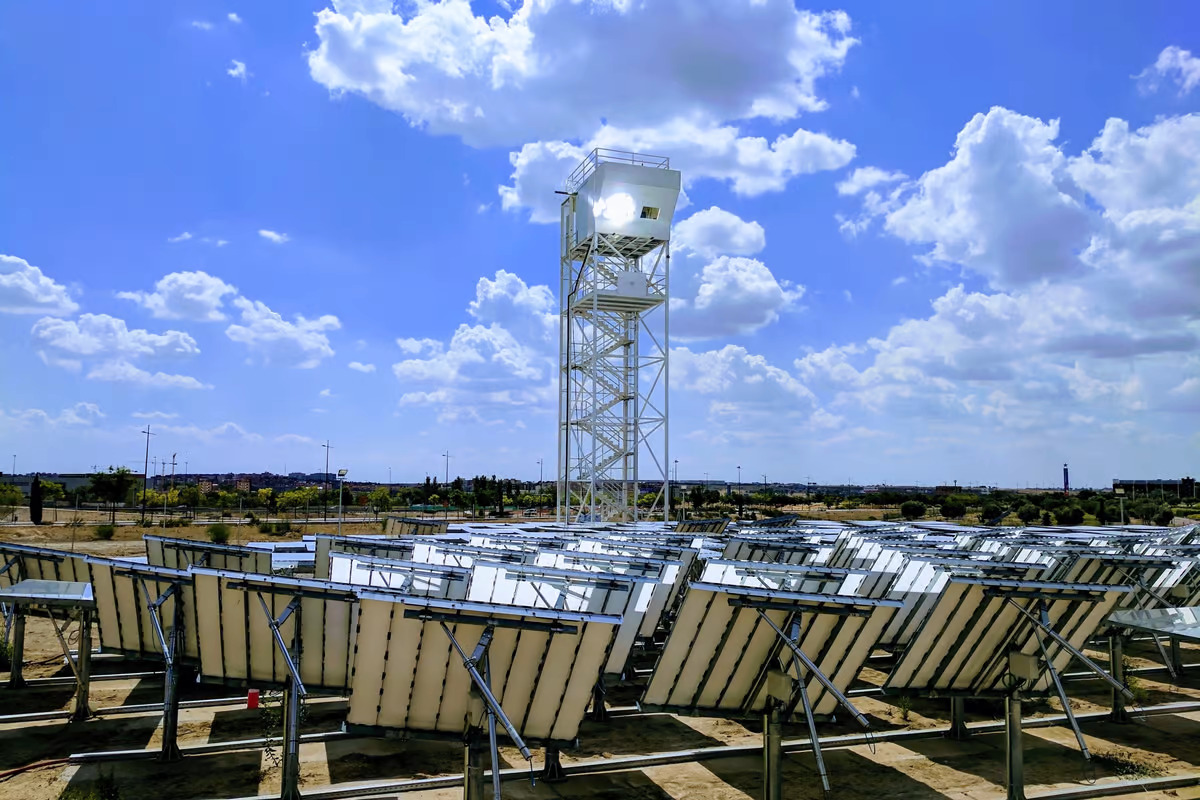 –
By Loz Blain
2022 Jul 20
–
Taking carbon dioxide, water and sunlight as its only inputs, this solar thermal tower in Spain produces carbon-neutral, sustainable versions of diesel and jet fuel. Built and tested by researchers at ETH Zurich, it’s a promising clean fuel project.

Why do we need sustainable aviation fuel (SAF)?

Fossil fuels can be replaced with batteries or hydrogen in cars and trucks – but aircraft are trickier. With more than 25,000 commercial airplanes in service today, and service lifetimes around 25 years, airlines are looking to carbon-neutral fuels to bring down their emissions. It’s a transitional step, but an important one until clean aviation tech is ready and the entire global fleet can be converted to something else.

Carbon-neutral fuels are drop-in replacements for today’s kerosene Jet-A fuel; they mix in with regular fuel and get burned in jet engines as per normal, producing the normal amount of carbon emissions. The difference is that rather than pulling that carbon straight out of the ground, carbon-neutral fuels grab CO2 from elsewhere; it’ll still end up in the atmosphere, but at least it does some useful work before it gets there, and every gallon burned is a gallon of conventional fuel that wasn’t burned.

How is SAF currently made?

There are a lot of ways to make carbon-neutral fuels – and not all of those are acceptable for other reasons. Biofuels grown from specially raised corn crops, for example, create their own emissions, from fertilizers and farm equipment, and they use land that could otherwise be producing food. Chopping down forests and using the wood as biomass is also out, for reasons that should be obvious, but the fact that there are rules in place around this suggests that even in the sustainability game, there are still bad-faith operators.

Landfill waste-to-jet-fuel plants are popping up here and there, taking municipal garbage or old cooking oil and using that as a feedstock to create syngas, which can be refined into synthetic fuels. But the pyrolysis process usually involved requires a lot of energy – either dirty energy or clean energy that could be used elsewhere – and the feedstock is so wildly random that the resulting fuels sometimes need an extra, energy-intensive cleaning step before they’re ready to go save the planet in a Dreamliner.

Another way is to capture carbon directly from other emissions sources, and convert that into fuel. This can be done by using green electricity to power an electrolyzer, then mixing the resulting hydrogen with carbon monoxide to create syngas, which can then be refined into fuels – but there are energy losses at each of these steps.

Which brings us to this new, much simpler design out of ETH Zurich, which has been built and tested at the IMDEA Energy Institute in Spain.

This pilot plant runs on concentrating solar thermal energy. One hundred and sixty-nine sun-tracking reflector panels, each presenting three square meters (~32 sq ft) of surface area, redirect sunlight into a 16-cm (6.3-in) hole in the solar reactor at the top of the 15-m-tall (49-ft) central tower. This reactor receives an average of about 2,500 suns’ worth of energy – about 50 kW of solar thermal power.

This heat is used to drive a two-step thermochemical redox cycle. Water and pure carbon dioxide are fed in to a ceria-based redox reaction, which converts them simultaneously into hydrogen and carbon monoxide, or syngas. Because this is all being done in a single chamber, it’s possible to tweak the rates of water and CO2 to live-manage the exact composition of the syngas.

How much fuel does it make?

This is the big question, really, and I’m afraid the research paper doesn’t make this information easy to divine. Overall, the researchers ran the system for nine days, running six to eight cycles a day, weather permitting. Each cycle lasted an average of 53 minutes, and the total experimental time was 55 hours. Several cycles had to be stopped due to overheating, when temperatures in the reactor rose past the targeted 1,450 °C (2,642 °F) to a critical temperature of 1,500 °C (2,732 °F).

In total, the experimental pilot plant produced around 5,191 liters (1,371 gal) of syngas over those nine days, but the researchers don’t indicate exactly how much kerosene and diesel this became after the syngas was processed, so we can’t give a simple figure for this pilot plant’s output per day. Even if we could, it might not scale up in a linear fashion.

But to give you a sense of the size of the problem here, a Boeing 787 Dreamliner has a fuel capacity up to 126,372 L (36,384 gal), on which it can fly up to 14,140 km (8,786 miles) – roughly the distance from New York to Ho Chi Minh City. And there are tens of thousands of commercial aircraft out there flying multiple missions per day.

But these things don’t necessarily have to replace all the fuel in question – synthetic fuel can be blended with regular fuel in whatever quantities it’s available, and every bit helps reduce overall emissions.

Where to from here?

The team says the system’s overall efficiency (measured by the energy content of the syngas as a percentage of the total solar energy input) was only around 4% in this implementation, but it sees pathways to getting that up over 20% by recovering and recycling more heat, and altering the structure of the ceria structure.

“We are the first to demonstrate the entire thermochemical process chain from water and CO2 to kerosene in a fully-integrated solar tower system,” said ETH Professor Aldo Steinfeld, the corresponding author of the research paper. “This solar tower fuel plant was operated with a setup relevant to industrial implementation, setting a technological milestone towards the production of sustainable aviation fuels.”

The research is open access in the peer-reviewed journal Joule.