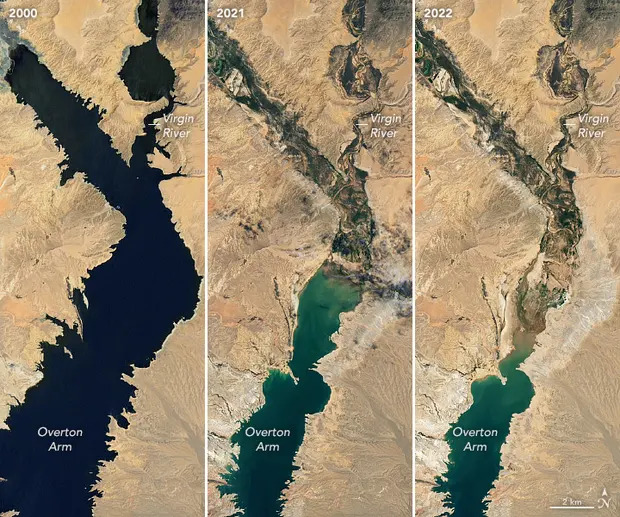 Gabrielle Canon @GabrielleCanon
Last modified on 2022 Jul 21
–
Stark images of the “bathtub ring” around Lake Mead have come to symbolize the devastating effects of drought at America’s largest reservoir. Now, newly released satellite pictures from NASA offer a new view of how dramatically water levels have declined over the past 22 years.

The images, which cover the years 2000, 2021 and 2022, show once-full tributaries transformed into dry crevasses. The lake, which supplies water to roughly 25 million people across the American west, is currently at its lowest levels since it was filled in 1937. As of 18 July, it stands at just 27% of its capacity.

Michael Carlowicz, managing editor of the NASA Earth Observatory, described it as “a stark illustration of climate change and a long-term drought that may be the worst in the US west in 12 centuries” in a post on the agency’s site.

The receding waters have shuttered recreational boat ramps and threatened hydropower production. They have also revealed decades of secrets once hidden in the depths. A body in a barrel – believed to a gunshot victim of the mob – has been recovered, as have artifacts and trash left behind by years of vacationers, while a second world war-era boat was pulled from the shallows earlier in July.

But what the drying mud has most vividly exposed is the devastating toll of the the climate crisis and its rapid progression. Lake Mead is just one part of the imperiled Colorado River Basin, which provides water to roughly 40 million people, 5m acres of agricultural land, and plants, fish, animals and birds that call the riparian ecosystems home. The entire system is now at 35% capacity.

Over-extraction has hastened the system’s decline, which has also suffered from reduced snowmelt and searing temperatures that bake more moisture from the region. More than a third of the American west is now classified in extreme drought, by the US Drought Monitor, with the threat of hot, dry days lingering in the seasons ahead.

As main reservoirs along the Colorado River reach critically-low levels, including Lake Mead, the federal government has called on states that rely on the basin to enact drastic cuts in their water use. But climate scientists believe the disaster is not a temporary condition. It is a systemic shift that must be prepared for and adapted to. Cuts may be coming – but far more is needed to sustain the system as conditions intensify. 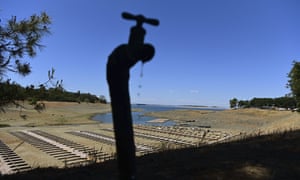 ‘Truly an emergency’: how drought returned to California – and what lies ahead