Home
Just Plain WEIRD #2
&
News
&
WEIRD NATURE
&
WEIRD SCIENCE
The end of everything: 5 ways the universe could be destroyed 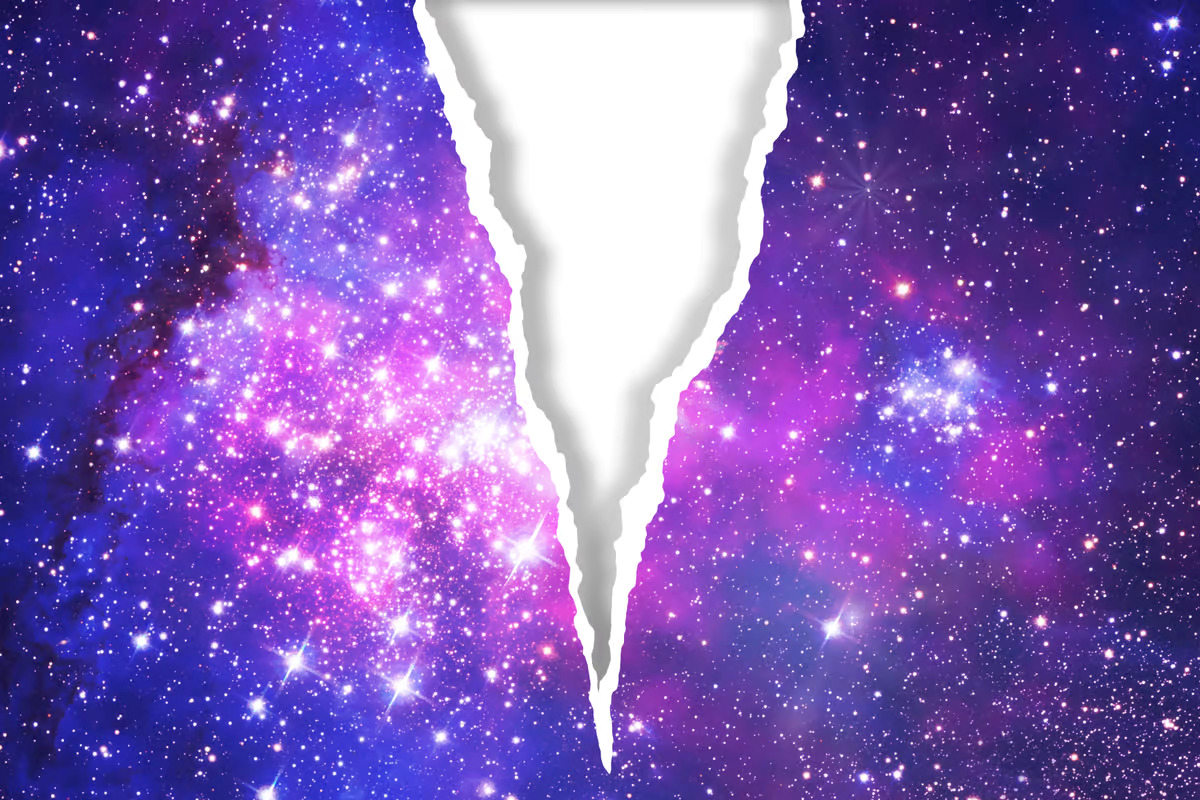 The universe could end in a myriad of ways.  Depositphotos

–
By Michael Irving
2022 Jul 22
–
Everything has to end eventually – but does that include the universe itself? And if so, how? And when? It might be hard to imagine a catastrophe big enough to affect the entirety of existence, but physicists do expect it all to end at some point – and it may come sooner than we think. Here are some of the leading hypotheses about how the universe could end, and when.

To figure out how the cosmos could come to a close, physicists look back to the beginning. About 13.8 billion years ago, space and time burst forth from an incredibly dense singularity, an event that’s come to be known as the Big Bang. The universe rapidly expanded from that point, with matter cooling and condensing into galaxies and all the stars and planets they contain.

But the universe is still expanding, and doing so at an accelerating pace, thanks to a mysterious force that scientists call “dark energy.” As that name suggests, we know very little about how this force works or why it’s pushing everything away from everything else, but it has some pretty major implications for the ultimate fate of the universe. How it plays out depends on how you tweak the numbers in the models.

According to our best models of the evolution of the universe, the most likely scenario is what’s called the Big Freeze. If dark energy keeps accelerating the expansion of the universe forever – and calculations suggest that it will – then the cosmos is in for a slow death that’s drawn out for a googol years. That unfathomable number is a one followed by 100 zeroes.

If you could watch a patch of sky in fast-forward over billions of years, the stars would start to turn red, then fade out completely. That’s because the expanding universe would stretch the wavelength of their light farther and farther towards the red end of the spectrum, before rendering them completely invisible to the eye.

Of course, even if you couldn’t see them, the distant stars and galaxies would still exist – at least for a few trillion years. But after a while, the expansion would dilute the dust and gas floating around in space, until there isn’t enough concentrated in any one region to fuel the birth of new stars. With no more being born, stars eventually become an endangered and then extinct species, as the last of them die off.

By the year 10 tredecillion (a one followed by 43 zeroes), there won’t be anything but black holes left. And even these aren’t eternal – as Stephen Hawking predicted, black holes slowly give off radiation until they eventually evaporate.

After about 1 googol years, once all the black holes are gone too, the universe settles into its final age – the Dark Era. Light and matter are distant memories, and the remaining loose particles will live the loneliest possible existence, rarely having the chance to whizz within a light-year of each other, let alone interact. And nothing else will ever happen, for eternity.

A similar scenario leads to a far more dramatic death, much sooner. In this model, dark energy doesn’t just accelerate the expansion of the universe at a steady pace, it accelerates exponentially, eventually tearing the very fabric of reality apart – an ending called the Big Rip.

There’s a physical limit to the distance into space that we could ever see, even if you had the most powerful telescope possible. That limit is dictated by the speed of light – at a certain point, objects are too far away for their light to have had enough time to reach Earth. This region is called the observable universe.

In the Big Rip model, the exponentially accelerating expansion pushes more and more objects beyond that boundary, meaning that the observable universe is constantly shrinking. Any two objects that are farther apart than this boundary allows can no longer influence each other through the fundamental forces, like gravity or electromagnetism.

As that distance shrinks, large scale structures of the universe will begin to crumble – as gravity’s influence shrinks, it won’t be able to hold galaxy clusters together, and they’ll start dissolving. Eventually the same will happen to the galaxies themselves, sending stars drifting off on their own. Later, the cosmic event horizon will shrink beyond the scale of an individual star system, meaning planets will no longer be bound to their orbits around stars.

In the final few minutes of existence, that event horizon would shrink smaller than the scale of molecules, disrupting the forces that hold matter together, shredding stars, planets and everything on them. And finally, those loose atoms themselves would be ripped apart particle by particle. The last victim is the fabric of spacetime itself.

The scientists who propose this model predict that, if it were to happen, the universe has about 22 billion years left to live. Thankfully though, other scientists believe that this scenario involves parameters that aren’t realistic, so is less likely to occur than some of the other ideas on this list.

Perhaps the universe will end in the exact opposite way – instead of expanding forever into nothingness, it changes course and collapses in on itself in a so-called Big Crunch.

In the cosmic tug of war between gravity trying to pull everything together and dark energy trying to push it apart, scientists usually stack their chips in favor of dark energy, which would ultimately lead to a Big Freeze or Big Rip ending. But we can’t completely count gravity out of the running.

If the density of matter in the universe is high enough, its gravity could overcome the expansion and trigger a contraction phase instead. Everything will begin to move towards everything else as the universe shrinks once again. Much like our current expansion phase, anyone alive at the time wouldn’t be directly affected – at least until near the end.

Galaxy clusters would start to merge, then galaxies themselves, and eventually individual stars would collide more regularly. But the real trouble begins with the cosmic microwave background – the background radiation of the universe left over from the Big Bang. As its photons are shifted towards the blue end of the spectrum, this radiation heats up, until eventually it becomes hotter than stars. That means the stars can no longer radiate their heat outwards, and will continue to get hotter and hotter until they evaporate.

In the last few minutes, the temperature of the universe would be so extremely hot that atoms themselves fall apart. Not that they’ll have long to worry about that, since they’ll be sucked into the black holes that are taking up an increasing percentage of the shrinking universe.

Eventually, the entire contents of the universe will be crushed together into an impossibly tiny space – a singularity, like a reverse Big Bang.

Different scientists give different estimates of when this contraction phase might begin. It could be billions of years away yet. Or, according to a recent study, it could be quite soon, cosmically speaking, as the universe reverses course about 100 million years from now. In that model, the contraction phase would take about a billion years before we return to that singularity.

But that might not be the end. A variation on the above hypothesis suggests that moments before the universe collapses into an infinitely dense singularity, it’s saved by quantum processes and reverses course once again, beginning a new period of expansion that’s effectively another Big Bang for a brand new universe. This model is known as the Big Bounce.

While it might sound a little too convenient, proponents of the idea say that there is some precedent in the world of quantum physics – after all, as the universe shrinks towards a singularity, it becomes so small that quantum rules take over from the large-scale classical physics we’re familiar with.

At that point, quantum tunneling can occur, where particles can overcome barriers that by all accounts they shouldn’t have enough energy to pass through. This drives processes like radioactive decay and, according to a recent study, could also allow a contracting universe to “escape” the fate of total collapse and begin expanding again.

Intriguingly, support for the Big Bounce arises out of another theory called loop quantum gravity, which was created as a way to explain gravity in terms of quantum mechanics.

The fun implication of the Big Bounce hypothesis is that we might be in the middle of a never-ending chain of universes being created and destroyed.

[Editor’s Note: This relates to the ancient Indian theory of the continuous Universe.]

The final doomsday scenario on this list is perhaps the most unsettling, because it could already be barreling down on us and we wouldn’t know until it hit. It’s called a false vacuum decay, or more colloquially the Big Slurp.

It’s a law of physics that a system will naturally try to become stable. To do so it moves from a state of high energy to one with lower energy, until it stabilizes into its lowest possible energy state. For quantum fields, this is known as its vacuum state.

It’s thought that all known quantum fields are in their stable vacuum states – except for one: the Higgs field. It seems to be in a false vacuum state, which means that it currently appears stable but is predicted to not be in its lowest energy state.

But that could change without warning. Literally any second, the Higgs field could suddenly slip into a lower energy state, taking out a huge chunk (if not all) of the universe in the process.

All it would take is for one tiny point in space to collapse into this lower energy state, which would send a bubble of vacuum decay expanding outwards at the speed of light. Moving that fast, we couldn’t even see it coming until the wall of that bubble slammed into Earth.

What happens once we’re inside this bubble? No one’s really sure, but it will probably rewrite the laws of nature. There’s a chance that life might be possible under these new physics – but the universe could be so completely different that we can’t even imagine it. Worst case scenario, all matter is destroyed.

If there’s good news to be found, it’s that there’s a lot of uncertainty to the idea. Some models predict that false vacuum decay isn’t likely to occur for many billions of years yet, or that it’s impossible altogether. Others suggest that it should have happened by now, indicating our current universe might actually be the strange new physics inside the bubble.

The Higgs field could also be more stable than we give it credit for. It was, after all, only confirmed relatively recently with the discovery of the Higgs boson, so there’s still plenty left to learn through further study.

Or maybe the false vacuum bubble has just swallowed the Sun and will be here in eight minutes.  [Yikes!]

Michael Irving
Michael has always been fascinated by space, technology, dinosaurs, and the weirder mysteries of the universe. With a Bachelor of Arts in Professional Writing and several years experience under his belt, he joined New Atlas as a staff writer in 2016.
–
–
1 comment
Sign in to post a comment.
Please keep comments to less than 150 words. No abusive material or spam will be published.
MarkmBha – 2022 Jul 22 – 01:39 AM

One fact is for certain: humans will not be around.
–
–