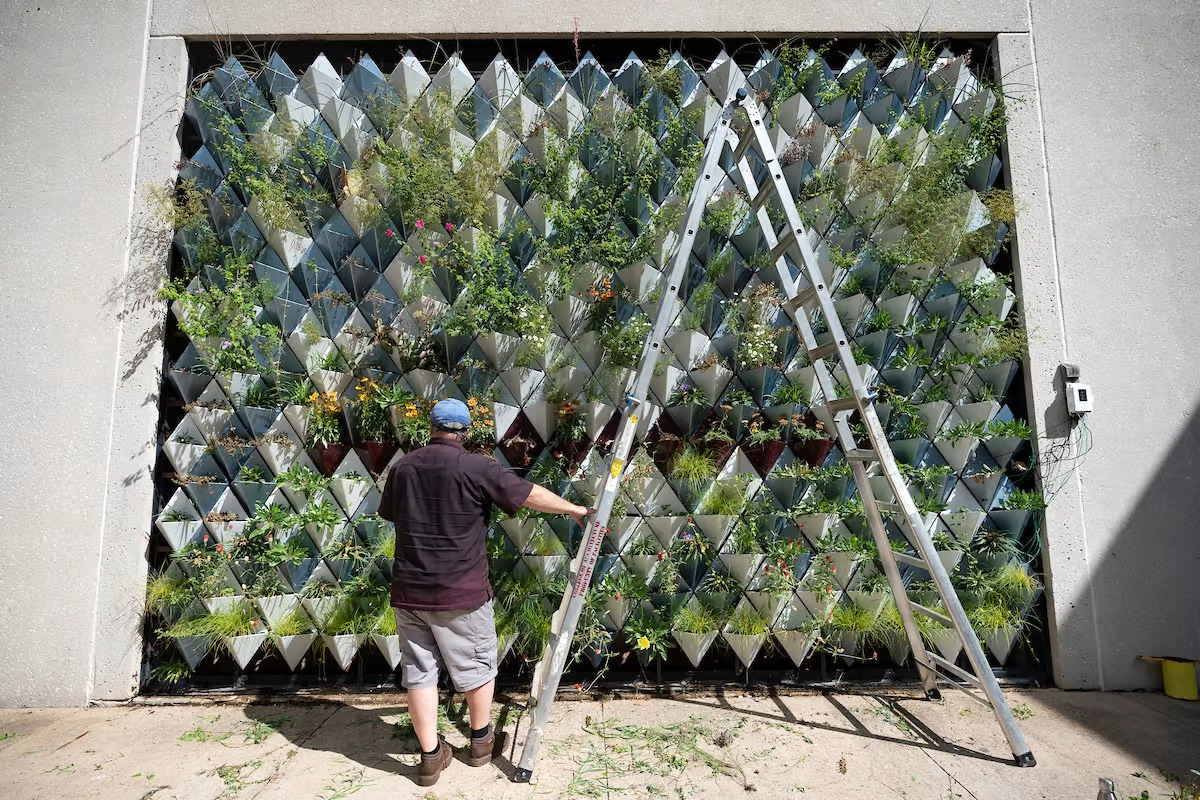 Although designed by two professors, the living wall was built mainly by a team of students.  Laura McKenzie/Texas A&M Division of Marketing & Communications

–
By Ben Coxworth
2022 Jul 27
–
Plant-covered “living walls” are becoming increasingly popular, as they look nice, produce oxygen, and (when outdoors) help keep buildings cool. A relatively new one is claimed to be more plant-friendly, plus it’s made of recycled materials.

Designed by Texas A&M University’s associate professors Bruce Dvorak and Ahmed K. Ali, the 10-ft (3-m) tall wall is located between the three buildings that make up the institution’s Langford Architecture Center. Although it was initially installed over an existing brick wall in 2018, it was recently replanted after an “unprecedented freeze” killed many of the plants last February.

Unlike most living walls, which house the plants in recessed pockets, this one utilizes approximately 300 diamond-shaped planters. These are made from folded scrap sheet metal (obtained from the automotive industry) and disposable matrix trays – the latter are plastic trays used to transport components in the production of printed circuit boards.

Each planter reportedly holds a greater amount of soil than the compartments in traditional living walls, providing more room for the plants’ root systems. Additionally, because the planters protrude out from the wall, the plants can grow straight upward instead of at an unnatural angle.

What’s more, the integrated drip irrigation system (which runs behind the wall) can be set to meet the watering needs of each individual plant. And if any plant requires more attention, its planter can be removed and replaced as needed. That said, because the wall is located in the arid environment of Texas, all of the plants chosen for it are drought-resistant.

Dvorak and Ali are now in the process of patenting their living wall system, and are seeking industry partners for commercial production. They even envision a larger version of the setup, which could be used for the vertical farming of crops in urban settings.

Ben Coxworth
Based out of Edmonton, Canada, Ben Coxworth has been writing for New Atlas since 2009 and is presently Managing Editor for North America. An experienced freelance writer, he previously obtained an English BA from the University of Saskatchewan, then spent over 20 years working in various markets as a television reporter, producer and news videographer. Ben is particularly interested in scientific innovation, human-powered transportation, and the marine environment.
–
1 comment
Sign in to post a comment.
Please keep comments to less than 150 words. No abusive material or spam will be published.
Treon Verdery – 2022 Jul 27 – 07:06 PM