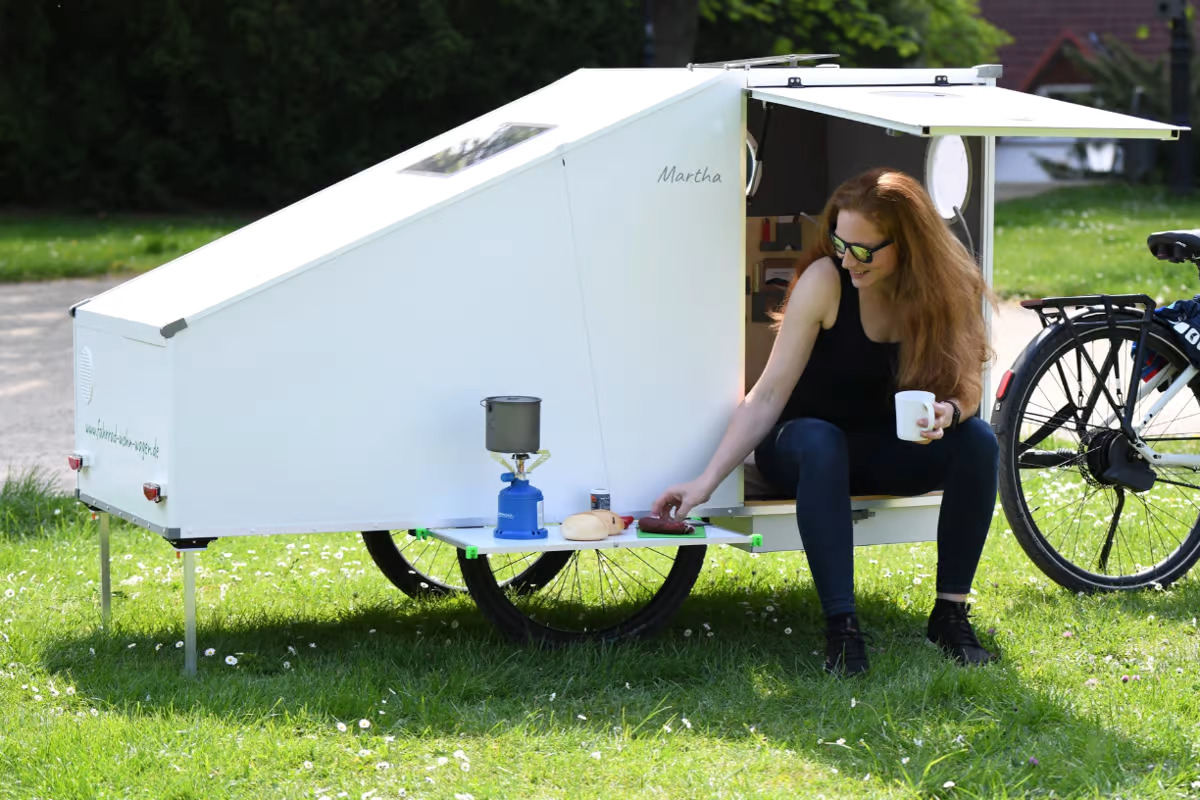 The Maxmess Martha trailer comes with an indoor/outdoor table and a door that doubles as an awning.  Maxmess Design.  View gallery – 7 images

With hordes of amazing and affordable camper vans and small motorhomes, Europe has long been a world leader in compact RV design. And now that a different type of motor vehicle is becoming popular around the continent, it’s also becoming a world leader in the design of an even smaller breed of RV: the bicycle/ebike camper.

Flip the calendar back just two years, and we’ve watched Germany give us the Mody teardrop and Scout transformer, while Latvia kicked in a wild bike-boat motorhome. Throw it back a few years more, and you can count an inflatable two-person from Austria and a curvy folding teardrop from Denmark.

Now we can add another point to Germany’s tally with the launch of today’s subject, a solo drop trailer known as Fahrrad Wohnwagen “Martha,” brought to life by Wernigerode-based Maxmess Design. The name translates quite simply as Bicycle Caravan Martha, but we’ll just keep it simple and call ‘er Martha.

The Martha trailer design certainly isn’t as pretty or refined as the rounded Mody or Wide Path bicycle campers, but it’s optimized for practicality, not aesthetics. Maxmess admits that the shape is simply easier to manufacture than a rounder teardrop.

Continuing with that theme, Maxmess chose a 2-m (6.6-ft) body length so it would work more easily with standard 2-m aluminum sheets while supporting 195 cm (77 in) of interior length to house the 193 x 76 x 7-cm (76 x 30 x 2.6-in) mattress capable of sleeping an average-size adult. The trailer body also measures 100 cm (39 in) from the floor to the high ceiling, offering ample headroom.

What the Martha trailer lacks in exterior styling, it makes up for in its cozy, feature-packed interior. While some bicycle camper manufacturers are content just to give cyclists a set of walls and maybe a window or table, Maxmess delivers a more thoughtfully equipped micro-home. In addition to the included mattress, the Martha comes complete with a small electrical system with 30-Ah battery and 50-W solar panel. That battery runs the inside LED reading light, exterior LED taillights and front ventilation fan. It also powers USB ports for charging phones, flashlights and other small electronics. There’s even a simple command center inside the doorway for users to switch the lights on, adjust fan speed and access power readings.

Another handy feature borrowed straight from the world of automotive RVs is the indoor/outdoor table. It sets up across the width of the interior, supported by the in-wall storage cubbies, to work as a dining table or laptop desk. Users can also secure the table to the outside of the trailer for holding a stove, French press, cups or whatever else they want.

Maxmess prevents the tiny solo trailer from feeling like a tomb by equipping it with polycarbonate porthole windows on three sides and two skylights on the roof. The uppermost skylight opens for better ventilation. Fabric wall trim, meanwhile, provides insulation and a softer, warmer touch than the bare aluminum. The lockable, strut-assisted flip-up door can be left open during nicer weather and serves as a small, integrated awning, much like the lift-gate of an SUV or small van.

Other thoughtful details include integrated straps and holsters for storing included gear like the coffee mug and utensils, four interior storage compartments, two under-body storage compartments accessed from outside, a clothesline, a carbon monoxide detector, and even a weather station with inside/outside temperature and humidity readings and date/time. Maxmess classifies the Martha a three-season camper and says it’s working on a heater solution for cold-weather use.

The Martha trailer weighs 50 kg (110 lb) fully equipped and rolls on 24-in wheels that offer 22 cm (8.6 in) of ground clearance. It can carry a payload up to 25 kg (55 lb). The trailer works with bicycles compatible with a Weber E coupling and measures 2.5 m (8.2 ft) in total length when including the tow bar.

This minute-long video shows the Martha trailer out and about.

C.C. Weiss
Chris joined the New Atlas team in 2011 and now serves as the automotive and campers editor, traveling extensively to gather the latest news on cars, outdoor sports gear and other innovations designed to help people experience and enjoy the greater world around them.
–
–
5 comments
Sign in to post a comment.
Please keep comments to less than 150 words. No abusive material or spam will be published.
Eggbones – 2022 Jul 28 – 06:19 PM
Why orient it the less aerodynamic way aound? Surely it makes morr sense to tow from the tapered end, unless the weight distribution is uneven. If so, I’d have moved the wheels back.
Kiffit – 2022 Jul 29 – 12:49 AM
The big facing surface behind the rider would stop forward motion dead in a decent headwind. Ditto sentiment with Eggbones here. I cannot for the life of me figure why anyone would put the aerodynamic bit at the back. Wind resistance is a big issue for riders. I would never consider such a design.
michael_dowling – 2022 Jul 29 – 05:30 AM
Gotta agree with the other comments. How much would it cost to attach some foam streamlining to that big boxy “front”? The current design would seriously cut into an ebike’s range.
Ornery Johnson – 2022 Jul 29 – 07:18 AM
I regularly see lots of great ideas on New Atlas. This trailer, unfortunately, is not one of them. Zero aerodynamics, wood inside the cabin, electrical system with batteries. Are we planning to camp five miles outside town with this tank?
NDG – 2022 Jul 29 – 11:35 AM

The female model is gorgeous. The trailer model is not. You need a rounded front end and top side with little if any loss of internal space for aerodynamic viability, especially on longer trips, as well as shedding rain water. Bending aluminum into curved forms is not hard and will introduce one additional step into the manufacturing process. The entry door has to be either wider or shaped differently to permit easier leg entry.
–