Blistering heatwaves are just the start. We must accept how bad things are before we can head off global catastrophe, according to a leading UK scientist. 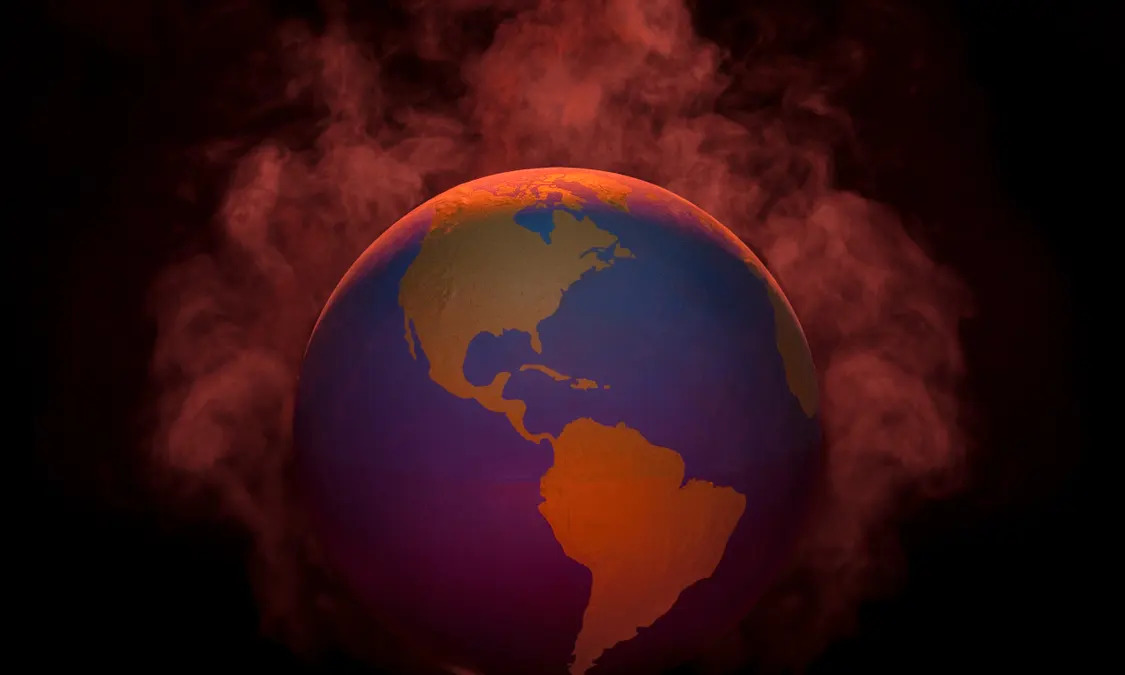 –
By Robin McKie
Last modified on 2022 Jul 31
–
The publication of Bill McGuire’s latest book, Hothouse Earth, could not be more timely. Appearing in the shops this week, it will be perused by sweltering customers who have just endured record high temperatures across the UK and now face the prospect of weeks of drought to add to their discomfort.

And this is just the beginning, insists McGuire, who is emeritus professor of geophysical and climate hazards at University College London. As he makes clear in his uncompromising depiction of the coming climatic catastrophe, we have – for far too long – ignored explicit warnings that rising carbon emissions are dangerously heating the Earth. Now we are going to pay the price for our complacence in the form of storms, floods, droughts and heatwaves that will easily surpass current extremes.

The crucial point, he argues, is that there is now no chance of us avoiding a perilous, all-pervasive climate breakdown. We have passed the point of no return and can expect a future in which lethal heatwaves and temperatures in excess of 50C (120F) are common in the tropics; where summers at temperate latitudes will invariably be baking hot, and where our oceans are destined to become warm and acidic. “A child born in 2020 will face a far more hostile world that its grandparents did,” McGuire insists.

In this respect, the volcanologist, who was also a member of the UK government’s Natural Hazard Working Group, takes an extreme position. Most other climate experts still maintain we have time left, although not very much, to bring about meaningful reductions in greenhouse gas emissions. A rapid drive to net zero and the halting of global warming is still within our grasp, they say.

Such claims are dismissed by McGuire. “I know a lot of people working in climate science who say one thing in public but a very different thing in private. In confidence, they are all much more scared about the future we face, but they won’t admit that in public. I call this climate appeasement and I believe it only makes things worse. The world needs to know how bad things are going to get before we can hope to start to tackle the crisis.”

McGuire finished writing Hothouse Earth at the end of 2021. He includes many of the record high temperatures that had just afflicted the planet, including extremes that had struck the UK. A few months after he completed his manuscript, and as publication loomed, he found that many of those records had already been broken. “That is the trouble with writing a book about climate breakdown,” says McGuire. “By the time it is published it is already out of date. That is how fast things are moving.”

Among the records broken during the book’s editing was the announcement that a temperature of 40.3C was reached in east England on 19 July, the highest ever recorded in the UK. (The country’s previous hottest temperature, 38.7C, was in Cambridge in 2019.)

In addition, London’s fire service had to tackle blazes across the capital, with one conflagration destroying 16 homes in Wennington, east London. Crews there had to fight to save the local fire station itself. “Who would have thought that a village on the edge of London would be almost wiped out by wildfires in 2022,” says McGuire. “If this country needs a wake-up call then surely that is it.”

Wildfires of unprecedented intensity and ferocity have also swept across Europe, North America and Australia this year, while record rainfall in the mid-central US led to the devastating flooding in Yellowstone National Park. “And as we head further into 2022, it is already a different world out there,” he adds. “Soon it will be unrecognisable to every one of us.”

These changes underline one of the most startling aspects of climate breakdown: the speed with which global average temperature rises translate into extreme weather.

“Just look at what is happening already to a world which has only heated up by just over one degree,” says McGuire. “It turns out the climate is changing for the worse far quicker than predicted by early climate models. That’s something that was never expected.”

Since the dawn of the Industrial Revolution, when humanity began pumping carbon dioxide into the atmosphere, global temperatures have risen by just over 1C. At the COP-26 climate meeting in Glasgow last year, it was agreed that every effort should be made to try to limit that rise to 1.5C, although to achieve such a goal, it was calculated that global carbon emissions will have to be reduced by 45% by 2030.

“In the real world, that is not going to happen,” says McGuire. “Instead, we are on course for close to a 14% rise in emissions by that date – which will almost certainly see us shatter the 1.5C guardrail in less than a decade.”

And we should be in no doubt about the consequences. Anything above 1.5C will see a world plagued by intense Summer heat, extreme drought, devastating floods, reduced crop yields, rapidly melting ice sheets and surging sea levels. A rise of 2C and above will seriously threaten the stability of global society, McGuire argues. It should also be noted that according to the most hopeful estimates of emission cut pledges made at COP-26, the world is on course to heat up by between 2.4C and 3C.

From this perspective it is clear we can do little to avoid the coming climate breakdown. Instead we need to adapt to the hothouse world that lies ahead and to start taking action to try to stop a bleak situation deteriorating even further, McGuire says.

Certainly, as it stands, Britain – although relatively well placed to counter the worst effects of the coming climate breakdown – faces major headaches. Heatwaves will become more frequent, get hotter and last longer. Huge numbers of modern, tiny, poorly insulated UK homes will become heat traps, responsible for thousands of deaths every summer by 2050.

“Despite repeated warnings, hundreds of thousands of these inappropriate homes continue to be built every year,” adds McGuire.

As to the reason for the world’s tragically tardy response, McGuire blames a “conspiracy of ignorance, inertia, poor governance, and obfuscation and lies by climate change deniers that has ensured that we have sleepwalked to within less than half a degree of the dangerous 1.5C climate change guardrail. Soon, barring some sort of miracle, we will crash through it.”

The future is forbidding from this perspective, though McGuire stresses that if carbon emissions can be cut substantially in the near future, and if we start to adapt to a much hotter world today, a truly calamitous and unsustainable future can be avoided. The days ahead will be grimmer, but not disastrous. We may not be able to give climate breakdown the slip but we can head off further instalments that would appear as a climate cataclysm bad enough to threaten the very survival of human civilization.

“This is a call to arms,” he says. “So if you feel the need to glue yourself to a motorway or blockade an oil refinery, do it. Drive an electric car or, even better, use public transport, walk or cycle. Switch to a green energy tariff; eat less meat. Stop flying; lobby your elected representatives at both local and national level; and use your vote wisely to put in power a government that walks the talk on the climate emergency.”

Hothouse Earth: An Inhabitant’s Guide by Bill McGuire is published by Icon Books, £10.00.

Stings in the tail

Under our feet As vast, thick sheets of ice disappear from high mountains and from the poles, rock crusts that had previously been compressed are beginning to rebound, threatening to trigger earthquakes and tsunamis. “We are on track to bequeath to our children and their children not only a far hotter world, but also a more geologically fractious one,” says Bill McGuire.

New battlefields As crops burn and hunger spreads, communities are coming into conflict and the election of populist leaders – who will promise the Earth to their people – is likely to become commonplace. Most worrying are the tensions over dwindling water supplies that are growing between India, Pakistan and China, all possessors of atomic weapons. “The last thing we need is a hot war over water between two of the world’s nuclear powers,” McGuire observes.

Methane bombs Produced by wetlands, cattle and termites, methane is 86 times more potent in its power to heat the atmosphere than carbon dioxide, though fortunately it hangs around for much less time. The problem is that much of the world’s methane is trapped in layers of Arctic permafrost. As these melt, more methane will be released and our world will get even hotter.

Losing the Gulf Stream As the ice caps melt, the resulting cold water pouring from the Arctic threatens to block or divert the Gulf Stream, which carries a prodigious amount of heat from the tropics to the seas around Europe. Signs now suggest the Gulf Stream is already weakening and could shut down completely before end of the century, triggering powerful winter storms over Europe.

Calorie crunch Four-fifths of all calories consumed across the world come from just 10 crop plants including wheat, maize and rice. Many of these staples will not grow well under the higher temperatures that will soon become the norm, pointing towards a massive cut in the availability of food, which will have a catastrophic impact across the planet, says McGuire.
–
– 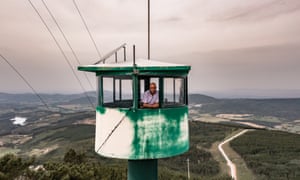