Scientists concluded that a series of storms could dump enough rainfall to displace millions, causing over $1tn in losses. 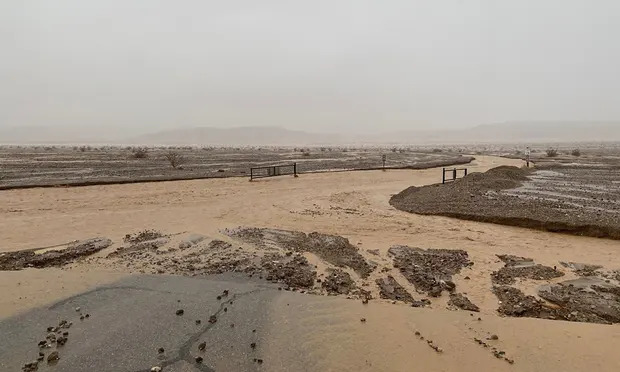 Driven by the climate crisis, exceedingly rare megafloods will become more common – and more catastrophic – according to a new study that found their likelihood has already doubled in California.
–

The unexpected threat lingers even as browning hillsides, fallowed fields and bathtub ring-laden reservoirs serve as a constant reminder of the drought disaster in the state, which may be woefully unprepared when the coin inevitably flips.

“Societally, from a public policy and climate adaptation infrastructure building perspective we are falling behind,” said Dr Daniel Swain, an author on the study, ARkStorm 2.0. Climate change is increasing the risk of a California megaflood, said the climate scientist at the Institute of the Environment & Sustainability at the University of California, Los Angeles.

“Our goal in doing this work is to get ahead of the curve as much as we can when it comes to the risk of megaflood,” he said. “We know that eventually it will happen and that climate change is upping the odds.”

Combining climate and high-resolution weather models, the scientists were able to analyze two separate scenarios – the present danger, and a future where risks are amplified by the climate crisis. The approach provides an accurate picture of what’s to come. The researchers found with a high-emissions trajectory, the annual likelihood of a 200-year-event would increase by 683% by 2060.

They built on the findings from a 2010 analysis called “ARkStorm,” led by the US Geological Survey with an interdisciplinary team, that concluded a series of severe storms had the potential to pelt the state with enough rainfall to displace millions, impair critical infrastructure and transportation corridors, and cause close to $1tn in economic losses.

The hypothetical event has been referred to as California’s “other Big One”, in reference to a large-magnitude earthquake expected to strike sometime in the future. But this megaflood would rival even the shaking of the earth, exceeding damages “by a considerable margin”, according to the study. Floods are being made worse by wildfires and drought, which change the landscapes and make debris flows more likely when water rises.

California’s floods differ from other parts of the world, and are typically caused by atmospheric rivers – strong storms that dump large amounts of water at once. A long sequence of them, where severe storms hit in quick succession, could quickly overwhelm landscapes and infrastructure. And, while wetting storms were once welcome in the parched state, “atmospheric river storms in a warming climate are likely going to shift from being primarily beneficial to primarily hazardous – that’s a big shift,” Swain said.

Already, the state has had to grapple with whiplash when it comes to extreme weather and it’s not alone.

In just the past two weeks, there have been at least four extreme floods in the US, events once cast as 1,000-year storms with a 0.1% likelihood of happening in a given year. Extreme precipitation events have increased by 55% in the north-east since the 1950s, according to the federal government’s national climate assessment, 42% in the mid-central, and 27% in the south-east.

But in the west, where the predominant focus is drought, states like California may be even less prepared for rising waters.

“[Warming] is both juicing out the winter storms, making them more extreme and amplifying flood risk, but also supercharging the capacity of the atmosphere to suck that water right back out of the landscape and make droughts worse as well,” Swain said, calling the issues two sides of the same thermodynamic coin.

California typically has a wet season during its winter months, and the state depends on the snowpack generated during that time as a water savings account of sorts, that slowly trickles into rivers and streams. But warming has resulted in less snow and more rain, an issue that both increases flood risks and leaves less water for use during dry times. Water also doesn’t go as far as it once did. Thirsty landscapes require more to survive the heat all while the atmosphere is more apt to quickly suck moisture from the soil.

Compounding catastrophes, or the layering of disasters like drought, floods and fires that overlap, are already testing the capacity of the country’s resiliency and straining resources. As they become more likely, agencies are struggling to keep pace, both in California and beyond.

“The field of emergency management is at a pivotal moment in its history,” the FEMA administrator, Deanne Criswell, said during a hearing of the House Homeland Security subcommittee on emergency preparedness, response and recovery. The agency is managing more than triple the amount of disasters this year as it did a decade ago.

Last year, the US spent an alarming $145bn on natural disasters – the third highest amount on record – and grappled with 20 extreme events that cost more than $1bn each, close to triple the average since 1980. The Federal Emergency Management Agency (FEMA) is already bracing for an escalation in need this year and for the ones that follow, requesting $19.7bn for its 2023 disaster relief fund.

“The changing climate is the biggest crisis facing our nation and makes natural disasters more frequent and more destructive,” Criswell said. “While our mission itself has not changed, our operating environment has.”

Swain said he hopes officials will heed the call cast by the findings from his work and other climate scientists who have outlined the threats.

“This has major public policy and disaster preparedness implications,” he said. While this approach was tailored specifically to California and its unique weather patterns, he hopes the work can help frame research into risks of megafloods in other areas as well.

“Nobody could possibly argue we didn’t see this coming if and when it hits,” Swain said. “There’s still potentially time to do something about it before things go haywire.” 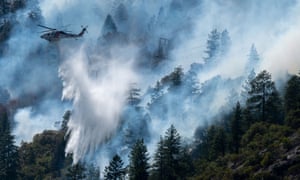