Why do cats’ eyes glow in the dark? Chloe, age 10, Barkhamsted, Connecticut

Cats and many other animals, including most dogs, can reflect light from their eyes. That’s why cats’ eyes will usually shine brightly in photos taken in a dimly lit room or glow when illuminated in the dark by a flashlight or a car’s headlights.

Species whose eyes glow have evolved to see better in low light because they either forage or need to look out for predators throughout the night, or they do most of their hunting at dawn and dusk. In fact, domesticated cats can see in conditions that are only 16% as bright as what people require.

Cats accomplish this because their pupils – the openings that appear black in the middle of their eyes that widen and narrow in response to light conditions – are special. Pupils operate like windows, with bigger ones letting more light into the eye. And a cat’s pupils can become up to 50% larger than human pupils in dim light. They also have a higher number of a specific type of light-sensing cell in the back of their eyes than we do. These cells, called rods, catch low-level light.

In addition to having large pupils and lots of rods, cats have something people don’t: a tapetum lucidum, a Latin medical term that translates to “bright or shining tapestry.” The tapetum lucidum is also known as “eyeshine.”

It’s located in the back of the eye behind the retina – a thin layer of tissue that receives light, converts the light to an electrical signal and sends this signal to the brain to interpret the image.

A cat’s tapetum lucidum is made up of cells with crystals that, like a mirror, reflect light back to the retina. This gives the retina a second chance to absorb more light.

The feline tapetum lucidum is special because its reflective compound is riboflavin, a type of vitamin B. Riboflavin has unique properties that amplify light to a specific wavelength that cats can see well, which greatly increases the sensitivity of the retina to low light.

In cats, the tapetum most often glows yellow-green or yellow-orange, but the color varies, just like their irises – the colorful part of their eye, which can be green, yellow, blue or golden. Variation in tapetum color is not unique to cats and can be found in lots of species. 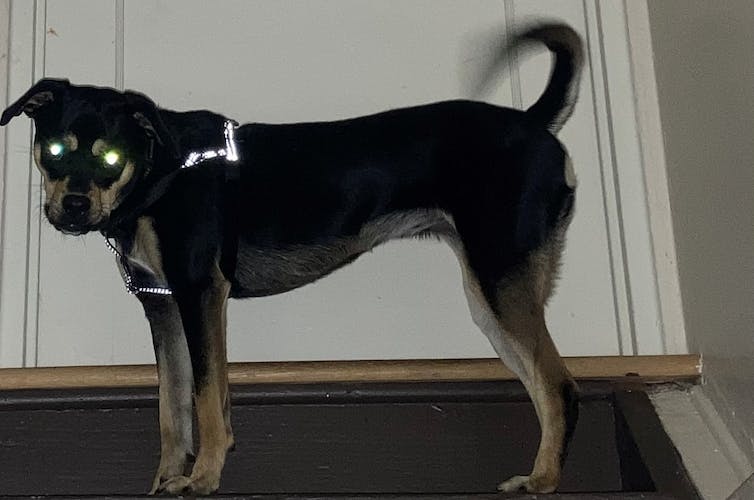 Most dogs’ eyes will glow in dark spaces when a light shines on them. Tommy Greco, CC BY-SA
–

Other animals’ eyes glow too

Many other animals that need to see at night have a tapetum lucidum. That includes predators and prey alike, everything from wild foxes to farmed sheep and goats.

The tapetum lucidum is also useful to fish, dolphins and other aquatic animals, because it helps them see better in murky, dark water.

Like cats, the lemur, a small primate, and its close relative, the bush baby – also known as a “night monkey” – also have a superreflective tapetum made with riboflavin.

Even though a lot of animals have eyeshine, some small domesticated dogs lack this trait. Most animals with blue eyes and white or light-colored coats have also lost this trait.

So don’t be alarmed if your dog’s or cat’s eyes don’t glow. The list of other species without a tapetum lucidum includes pigs, birds, reptiles and most rodents and primates – including humans. 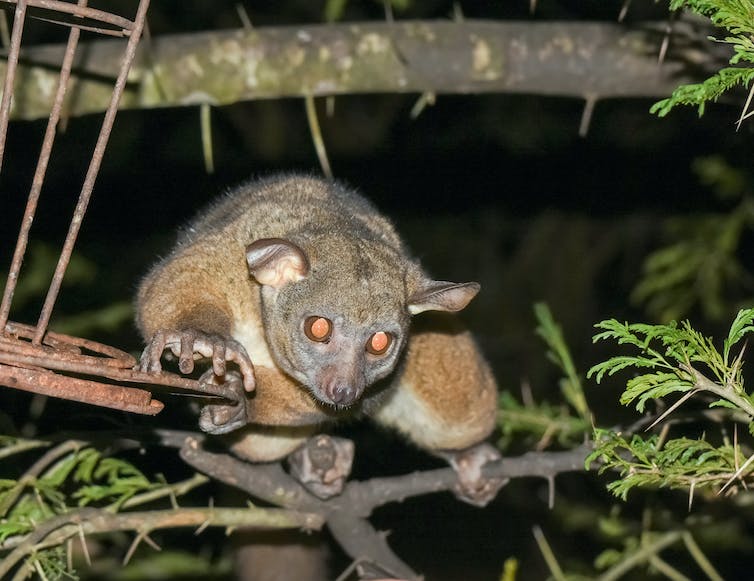 This bush baby can probably see better at night than you can. Smartshots International/Moment via Getty Images
–

Is there a downside?

Unfortunately, animals with a tapetum lucidum sacrifice some visual acuity for their ability to see in dim light.

That’s because all that light bouncing around as it reflects off the tapetum can make what they see a little fuzzier. So, a cat needs to be seven times closer to an object to see it as sharply as a person would in a brightly lit place.

But don’t worry, I’m sure your cat would rather see clearly at night than read a book.

–
Hello, curious kids! Do you have a question you’d like an expert to answer? Ask an adult to send your question to CuriousKidsUS@TheConversation.Com. Please tell us your name, age and the city where you live.

And since curiosity has no age limit – adults, let us know what you’re wondering, too. We won’t be able to answer every question, but we will do our best.
–

Braidee Foote does not work for, consult, own shares in or receive funding from any company or organization that would benefit from this article, and has disclosed no relevant affiliations beyond her academic appointment.

University of Tennessee provides funding as a member of The Conversation US.

Write an article and join a growing community of more than 150,700 academics and researchers from 4,452 institutions.