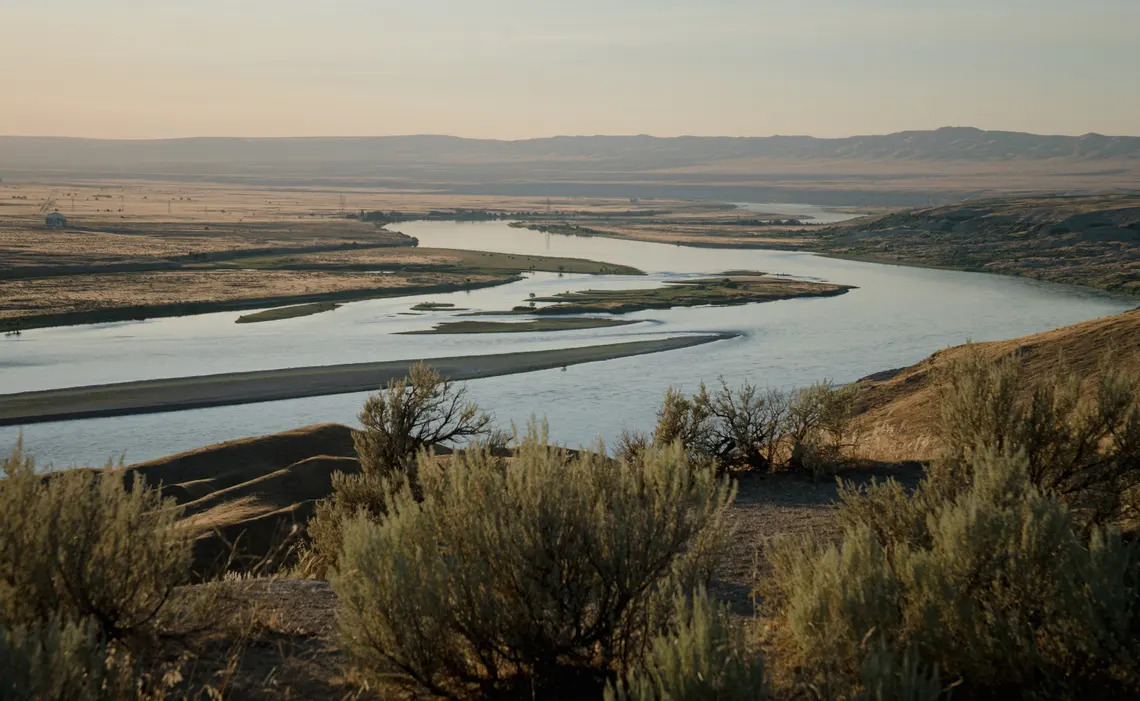 By Hallie Golden in Benton County and Yakama Nation reservation, Washington
Last modified on 2022 Aug 20
–
Trina Sherwood gazes out at the Hanford nuclear site as she speeds across the Columbia river in a small motorboat. More than 500 sq miles large and ringed by rocky mountains, the decommissioned nuclear production site is considered one of the most contaminated places in North America.

It also sits on the ancestral lands of the Yakama Nation and other Indigenous peoples in Washington state. Here, precious wildlife, vision quest sites and burial grounds lie side-by-side with signs reading “warning hazardous area” and towering nuclear reactors, some of which date back to the second world war.

There’s Gable Mountain, where young men would fast and pray, explained Sherwood, a cultural specialist for the Yakama Nation’s Environmental Restoration / Waste Management (ER/WM) program. There’s Locke Island, where an Indigenous village once stood, and the towering White Bluffs, where Native people collected white paint for ceremonies. There are also outcroppings of tules, which were used to make mats for ceremonies and tipis, as well as yarrow root, which was known to treat burns.

The Hanford nuclear site was established in 1943 as part of the Manhattan Project, and over the next four decades produced nearly two-thirds of the plutonium for the US’s nuclear weapons supply, including the bomb dropped on Nagasaki.

During its lifespan, hundreds of billions of gallons of liquid waste were dumped in underground storage tanks or simply straight into the ground. After the site’s nine nuclear reactors were shut down by 1987, about 56m gallons of radioactive waste were left behind in 177 large underground tanks – two of which are currently leaking – alongside a deeply scarred landscape.

In the decades since, the Yakama Nation has been one of four local Indigenous communities dedicated to the cleanup of this historic landscape. For the Yakama Nation, that has meant tireless environmental and cultural oversight, advocacy and outreach with the hope that one day the site will be restored to its natural state, opening the doors to a long-awaited, unencumbered homecoming.

Today, their outreach work has reached a fever pitch. There are few Yakama Nation elders still alive who remember the area before its transformation, and there are likely decades to go before cleanup is complete. So members are racing to pass on the site’s history to the next generation, in the hopes they can one day take over.

They didn’t have time to pack up anything. They just had to leave and they were never told why and how long they were going to be gone

“Our elders are leaving that have that historical knowledge; people that actually lived there during that time and can tell you stories about the area,” said Laurene Contreras, administrator for ER/WM, the program responsible for the Yakama Nation’s Hanford work. “That’s why it’s so important for us to make sure that we’re carrying that message forward.”

Yakama Nation history on the Hanford site dates back to pre-colonization, when people would spend the winter here fishing for sturgeon, salmon and lamprey in the Columbia River, as well as gathering and trading with other families. In 1855, the Nation ceded over 11m acres of land to the US, which included the Hanford area, and signed a treaty that relegated them to a reservation while allowing the right to continue fishing, hunting, and gathering roots and berries at “all usual and accustomed places”.

But in the 1940’s, the situation shifted dramatically when the area was cleared out to make room for the construction of nuclear reactors.

LaRena Sohappy, 83, vice-chairwoman for Yakama Nation General Council, whose father was a well-known medicine man, grew up in Wapato, about 40 miles from Hanford. She said she remembers the strawberry fields that lined the Hanford site, her family gathering Skolkol, a root and daily food, and traveling to the area for ceremonies.

Her cousin’s family who lived close to Hanford were woken in the middle of the night and forced to leave to make way for the nuclear site, she recalled

“They didn’t have time to pack up anything,” said Sohappy. “They just had to leave and they were never told why and how long they were going to be gone.”

The effort to give Indigenous people a voice in Hanford’s fate was forged in part by Russell Jim, a member of Yakama Nation’s council, whose work has been credited with helping to keep Hanford from becoming a permanent “deep geologic repository”, a place where high-level nuclear waste from this site and others across the country would be stored.

“From time immemorial we have known a special relationship with Mother Earth,” Jim, who died in 2018, said in a statement to the US Senate in 1980. “We have a religious and moral duty to help protect Mother Earth from acts which may be a detriment to generations of all mankind.”

Today, the ER/WM program, which was founded in the early 1980’s with Jim at the helm, includes such staff as a biologist, ecologist and archeologist. It’s funded by the US Department of Energy (DOE), which operates the Hanford site and leads the cleanup process under an agreement with the US Environmental Protection Agency (EPA) and the Washington state department of ecology.

The Yakama Nation program’s focus is on accelerating a thorough cleanup of the site, protecting culturally significant resources and assessing the threats to wildlife and water.

The area around Hanford is considered the last free-flowing section of the Columbia River. There’s a major spawning site for Chinook salmon, and all along this section of the waterway, sturgeon live all year round, explained Phil Rigdon, Yakama Nation acting Tribal Administrative Director.

Chemicals including mercury, which can damage the brain, kidneys and heart, and PCBs, which can cause cancer, have been found in the river and could be ingested when eating fish, according to a 2017 advisory. For the Hanford Reach, a 150-mile section of the river that runs through Hanford, it suggests limiting consuming some fish to four or fewer times a month.

In the past decade, it was also discovered that hundreds of gallons of highly radioactive waste have been leaking from two Hanford tanks, threatening the Columbia River.

McClure Tosch, a Natural Resource Injury Assessment lead for ER/WM, said recently Yakama Nation has played a key role in developing a plan for the EPA to monitor the basin, including fish tissue.

ER/WM has also been advocating for the federal government to test the wells at Hanford near the Columbia River for PFAS, long-lasting chemicals that can be found in an array of commercial and industrial products. If found, Tosch said, that could be a huge concern for the local drinking water. The energy department said in a statement: “Information-gathering about the occurrence and use of PFAS at DOE sites is ongoing”.

There has also been a focus by the Yakama Nation to preserve culturally significant plants. Most recently, Sherwood has been overseeing the protection of a bright yellow plant known as Umtanum desert buckwheat. It has long been known as a medicinal plant for the local Indigenous people, and today, Hanford is the only place in the world where it is documented as growing.

A ‘push and pull’ effect

Despite the sometimes glacial nature of the federal government’s work, the Yakama Nation have scored some important wins.

Recently, the ER/WM succeeded in amending a cleanup proposal for an area next to the Columbia River containing nuclear reactors, ensuring it will include a review of the impact on local aquatic insects. And in the coming months, Tosch says the tribe will work with the federal government to assess the effectiveness of a polyphosphate injection to sequester uranium found in Hanford’s groundwater; an approach the tribe has questioned.

ER/WM staff have also pushed back against a federal government change in how high-level radioactive waste is classified, which could downgrade some of Hanford’s waste, ultimately preventing it from being removed from the site as expected. The energy department said they don’t plan to move forward with this new interpretation without first meeting with local Indigenous Nations.

For their part, both DOE and EPA said their representatives meet with Yakama Nation regularly about Hanford and have benefited from theirs and other local Indigenous Nations’ expertise and input.

But Brian Stickney, DOE’s deputy manager for the Hanford Site, said in a statement that while Yakama Nation wants to see the lands returned to a pre-nuclear state, DOE is focused on regulatory requirements and protecting treaty rights.

The Washington state department of ecology, which helps to oversee the Hanford cleanup and whose officials meet with the Yakama Nation at least once a month, described their relationship with the tribal Nation as a bit “push and pull”.

“We are the regulators, and sometimes Yakama Nation would like us to push a little harder than they perceive us doing,” said Laura Watson, its director. “And so there’s a little bit of that push and pull. And that’s fine, that’s actually important as a regulator to have folks pushing.”

‘For our children not yet born’

A fully rehabilitated Hanford site likely won’t happen within the lifetime of Yakama Nation’s elders, or even the generation that follows. So, they’re working diligently to bring in younger tribal members to the effort.

In recent years, they’ve held coloring contests, a mass postcard mailing campaign and visited local schools, explained Samantha Redheart, who coordinates Stem programs for ER/WM. They’ve also offered college scholarships for students studying such subjects as engineering and science in the hopes that the recipients may one day bring that knowledge back to the community.

“We always share that Hanford is a multi-generational cleanup site,” she said. “Yakama Nation leaders and management are always looking into not just the cleanup today, but for our future generations and of our children that are not yet born.”

22 high school students were allowed to visit Hanford in 2016 – a rare opportunity, explains Redheart, as those under 16 are typically not allowed on most of the site. She said they took them to a series of culturally important sites, pointing out traditional cultural artifacts and salmon spawning grounds. But the experience was thoroughly regimented, involving energy department staff, hazmat guides and strict timelines.

If Sohappy had her way, sharing her knowledge of Hanford before it was a nuclear site with the next generation would involve something of a trip back in time. She would take them on wagons and horses to each of the important sites, making sure to point out where the strawberry fields and old town once stood.

It’s difficult to know whether that will ever be a reality. She herself hasn’t been to Hanford in over a decade.

“It angers me that I can’t go where my dad used to wander around,” she says. “There’s nothing there that’s pleasurable. Not anymore anyway. It’s all torn up.”

Strategies for nuclear weapons and waste