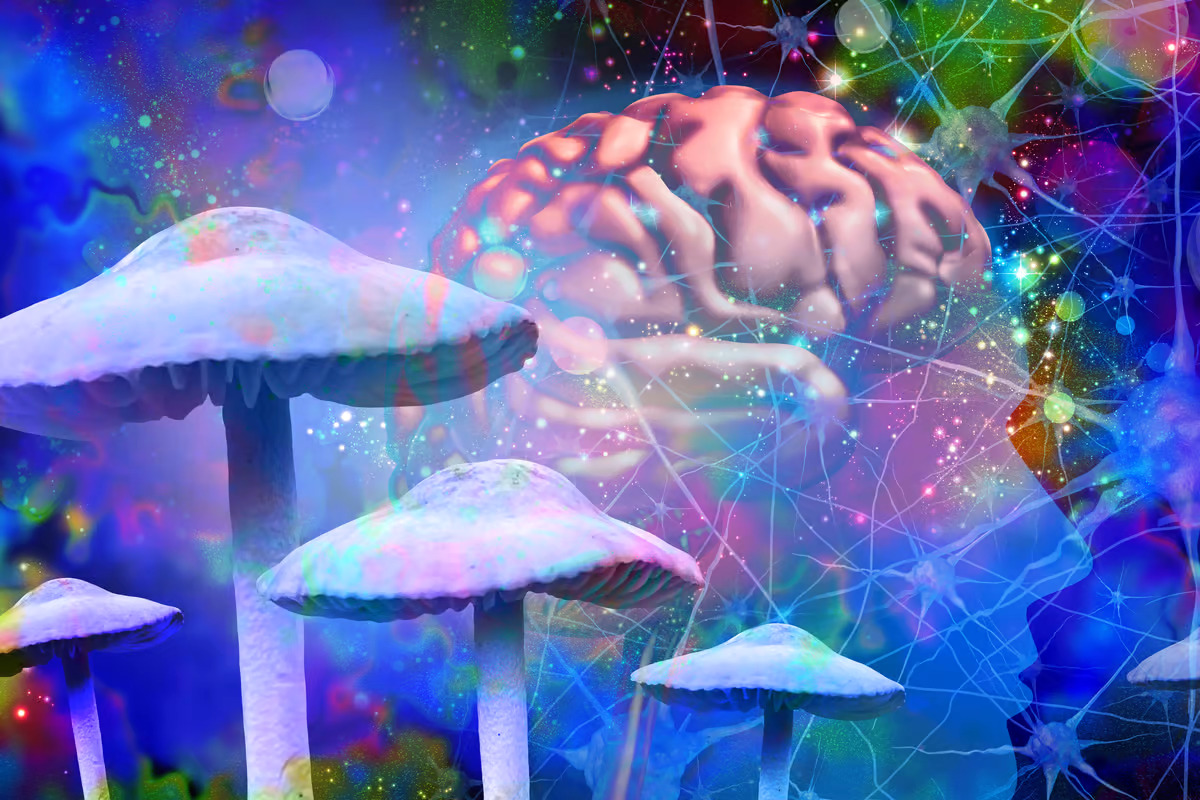 Almost every participant in the trial guessed whether they had been given psilocybin or placebo, raising questions over whether psychedelic trials can ever be properly blinded.  Depositphotos

Those in the placebo group were given what is known as an active placebo. In this case it was an anti-histamine called diphenhydramine, which in high doses can generate feelings of being flushed or even euphoria.

At the eight-month follow-up the study found 48% of those in the psilocybin group had stopped drinking completely, compared to 24% in the placebo group. In terms of reductions in “heavy drinking” (defined as days where more than four to five alcohol drinks were consumed), those in the psilocybin group had dropped their number of heavy drinking days by 83%, compared to a 51% drop in the placebo.

The study’s results are undeniably promising. Using LSD to treat alcoholism was one of the first therapeutic targets explored by researchers back in the 1950s, and there is a relatively rich vein of older work exploring this modality. But these new findings do highlight some significant unresolved problems within the field of modern psychedelic clinical research.

A randomized, blinded, control trial is the gold standard of modern research. Getting two groups of people together to test an intervention, but blindly giving one group a placebo, is a crucial way scientists can gather empirical evidence as to whether a novel treatment fundamentally works.

But in psychedelic science it can be virtually impossible to give someone an inactive placebo without them realizing pretty quickly they haven’t been given the real drug. Over the last few years this problem has been cited as potentially leading to over-inflated effects in psychedelic clinical trials.

In this new study, the NYU researchers noted virtually every subject correctly guessed whether they were given psilocybin or placebo. By the second drug session, nearly 95 percent of participants had guessed correctly which group they had been assigned.

Not only did the study participants effectively “break blind,” but the study therapists, who were also blinded, ultimately guessed the treatment groups. By the second drug session the therapists correctly guessed which patients had been given placebo and which psilocybin with 97.4% accuracy.

So, considering the attempt to double-blind this study completely failed, it seems slightly disingenuous to even frame the study as blinded. The fourth line of a press release from NYU Langone Health announcing the study explicitly states, “Neither the researchers nor the study participants knew which medication they received.” A fact that may have been true at the beginning of the research but was certainly not true by the end.

Senior author on the new study Michael Bogenschutz said using the antihistamine diphenhydramine as an active placebo was the team’s attempt at overcoming this problem.

“In this case we weren’t terribly successful in maintaining the blind,” Bogenschutz admitted. “Most people were able to guess what medication they received. We don’t necessarily have a better placebo condition in mind. So it kinda comes with the territory when the drug you’re using has very active, overt psychological effects that are easily distinguished.”

In announcing the new study results at a press conference the researchers introduced two participants from the trial. Both men spoke enthusiastically about their positive experiences, each basically quitting drinking after the trial.

But in a strange moment late in the press conference it was revealed, via a journalist question, that one of the two participants was actually from the placebo group. Paul Mavis, who had glowingly described the treatment earlier in the press conference as “significant” and “game-changing,” subsequently stressed the importance of the psychotherapy in his positive experience from the trial.

Mavis also stressed he didn’t know he had been given a placebo until literally a week ago, when he was approached to take part in this press conference, making him one of the the very few participants in the trial to not correctly guess their group assignment. All subjects in the trial were offered a third drug session with psilocybin, so those in the placebo group ultimately did experience a psychedelic session.

Mavis said even after being given a real dose of psilocybin, he still didn’t guess his first two sessions had been with a placebo. He simply interpreted the acute psychedelic experience he felt in that third session as being due to how open he had become to the drug after the two earlier sessions. And Bogenschutz indicated Mavis’ experience is a good example of how effective this general therapeutic protocol can be even in the absence of psychedelic drugs.

However, it was unclear why a subject from the placebo group was presented to the media as a success story from the trial. Is this to suggest the “psychedelic” in psychedelic-psychotherapy is partly placebo? Or is the psychotherapy generating the significant clinical benefits from this novel kind of treatment, and why there was little transparency over the detail that this participant was indeed from the placebo group?

Patient biographies from seven participants in the trial were offered to the media and Mavis’ details did not indicate he was in the placebo group. Instead his biographic details recounted how meaningful the insights he gained were during his sessions in the trial.

“During his first session in January 2019, he recalls negotiating with himself over when he would drink again and why,” the NYU bio on Mavis read. “This led to a sudden epiphany in which he realized that ‘drinking equals death. Boom. As though someone flipped a switch, I knew I was done with drinks for good.’”

The researchers clarify they have no direct financial stake in this particular work. Bogenschutz said NYU Grossman School of Medicine has filed a provisional patent for this research but stressed the reason behind this is to make sure no commercial, for-profit entity can monopolize the treatment and make it financially inaccessible to many in the future.

All of this does, however, suggest there is a pre-existing belief that this kind of psychedelic treatment works. Charles Marmar, chair of the department of psychiatry at NYU Langone, was frank in expressing this belief during the recent press conference.

“We believe we will be successful over time in reaching FDA approval,” Marmar said. “We, at NYU School of Medicine, and the field generally in psychedelic psychiatry, will achieve our milestones in the next five to 10 years to get FDA approval for psilocybin and other drugs for addiction and psychiatric illness.”

The findings in the new research are undeniably promising, indicating psilocybin could be helpful in treating alcohol use disorder. But in presenting this new study, and underplaying the impact of the placebo problem, the researchers have somewhat revealed a bias that is relatively prevalent in the world of modern psychedelic science. A underlying belief that these drugs work, will be approved soon, and the research currently being conducted is generated to serve and validate that pre-existing belief.

The new study was published in JAMA Psychiatry.