Carpet shark species can walk for up to two hours, enabling them to survive increasingly hostile environments, researchers say. 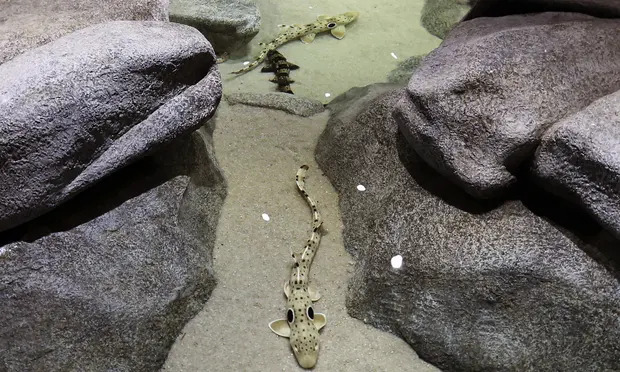 First published on 2022 Aug 23
–
Researchers at a Florida university say a small but feisty species of carpet shark with an extraordinary ability to walk on land is evolving to better survive warming seas and the climate crisis.

The epaulette shark, commonly found on shallow reefs of Australia and New Guinea, can walk for up to 30 meters on dry land using paddle shaped fins, and survive hypoxia – a deficiency of oxygen – for up to two hours.

“Such locomotor traits may not only be key to survival but also may be related to their sustained physiological performance under challenging environmental conditions, including those associated with climate change,” the study, published in the integrative and comparative biology journal, says.

“Findings to date suggest that this species has adaptations to tolerate some, but perhaps not all, of the challenging conditions predicted for the 21st century.”

Marianne Porter, professor of biomechanics at FAU’s department of biological sciences, said the sharks are able to slow and fast walk, as well as swim, giving them an exceptional ability to cross land to reach more favorable environments that other species did not possess.

“You might not think of beautiful, tropical beaches as harsh but in reality tidepools and coral reef environments are pretty harsh, subjected to warm temperatures when the tide is out and a lot of changes, a lot of things happening when the tide comes in and goes out,” she said.

“These little sharks can move from tidepool to tidepool, allowing them to access new pools to forage for food, or tidepools with better oxygenated water.

“Our collaborators in Australia have found they are able to withstand climate change conditions very well. These sharks are great models in starting to look at how these changing conditions may affect vertebrates in general, and other species, and can help us reflect what we might see in future oceans.”

Epaulettes are not the only shark species known to have ambulatory abilities. In 2013, researchers in Indonesia discovered a species that uses its fins to “walk” along the ocean floor, foraging for small fish and crustaceans.

A 2020 study by researchers at the University of Queensland and international partners, meanwhile, found at least nine species of shark used fins to walk in shallow water.

What sets epaulettes apart, however, is their tolerance of hypoxia for a prolonged period and ability to not only survive being on land, but to be able to walk distances up to 30 times its body length.

“Their ability to move around and walk from one place to another is really very important,” Porter said.

The researchers noted that it gave the sharks better agility to evade predators, and reach areas with more plentiful food and less competition for it.