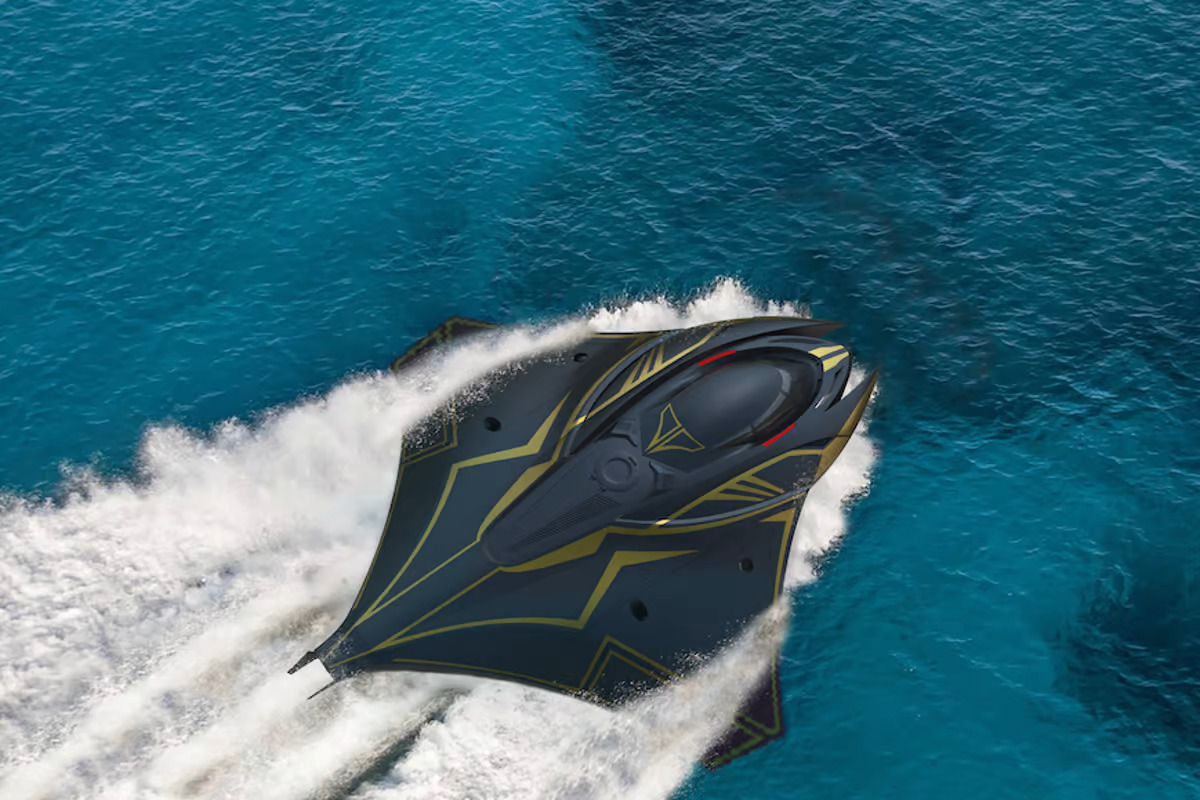 Yes, these images are renders. But the outrageous Kronos armored submarine actually seems to be under construction.  Highland Systems  View gallery – 10 images
–

By Loz Blain
–
Highland Systems is adding to its fearsome vehicle lineup in extraordinary style, with an 11-seat armored speed demon it calls the Kronos. Clearly inspired by the manta ray, this hybrid beast rocks folding wings and 1,200 horsepower of propulsion.
–
Founded by Ukrainians, and now based between the UAE and the UK, Highland Systems is an enigma of a company, describing itself as an R&D and project management mob corralling a bunch of engineering specialists from around the defense world. Last time we bumped into these guys, it was to check out their Storm hybrid amphibious MPV, which looked like simply a bunch of wild renders. But the team brought a prototype to IREX Abu Dhabi in the flesh, and it’s an absolute monster.

The rest of the company’s portfolio is no less outrageous. The rambunctious sci-fi of the Phantom MPV. The rally-tastic Buggy Hunter MK-200. The ludicrous and highly efficient luxury Trimaran superyacht – which is either a scary-good set of renders, or it’s actually been built. The company’s brochure goes further, detailing heavy, supersonic stealth drones, a range of other small and medium-sized UAVs, unmanned ground robots for dangerous jobs, and a program to electrify battle tanks and heavy armored vehicles with hybrid-electric drivetrains.

So while the Kronos armored submarine looks at first glance like complete rendered-up pish-tosh, the exotic dream of some over-excitable design student, this thing also appears to be legit.

It’s designed for a mix of commercial, military and allegedly rescue operations – and from the looks of the stark, largely windowless interior, it certainly doesn’t seem interested in tourism or luxury. A little over 9 m (29.6 ft) long, Kronos will weigh somewhere around 10,000 kg (22,000 lb). Its fat wings will fold upward, allowing you to tow it on a trailer if you wish to cause a series of gawking-related accidents among oncoming traffic.

The performance figures are nuts. Highland says it’ll do 80 km/h (50 mph) on top of the water, or 50 km/h (31 mph) underwater; that’s seriously fast through water, just ask Michael Phelps. It carries enough battery on board for a 36-hour all-electric mission, or you can fire up the diesel generator to add a further 18, taking total range up to a very impressive 54 hours of autonomy. There’s adaptive lighting, an automated life support system and air-con – and the schematics show spots for torpedoes as well.

It may look like pure science fiction, but Defence Blog‘s got a picture of the main shell under construction in the UAE, so it seems to be happening alright. We have no idea who these guys are building these crazy machines for, and can only assume they’ll show up in the middle of dormant volcanoes, guarded by sharks with frickin’ laser beams attached to their heads… Or at least ill-tempered sea bass.