When you don’t know what you’re looking for, it’s easier to miss it. U.S. Navy via Getty Images News
–

By Sam Hunter, Professor of Organizational Psychology, University of Nebraska Omaha
And by

Gina Scott Ligon, Director the National Counterterrorism Innovation, Technolology, and Education (NCITE) Center, University of Nebraska Omaha
–
Published: 2022 Aug 24
–
There’s a military aphorism that generals are always fighting the last war. It’s a natural human tendency to focus on the kinds of threats you’re used to while playing down the likelihood or importance of some new sort of attack.

Of course novel threats can crop up anytime and anywhere. An assassin killed former Japanese prime minister Shinzo Abe with an improvised firearm in a country largely unfamiliar with gun violence. Dozens of cases of Havana Syndrome, a health condition some have speculated is caused by directed energy or microwave weapons, remain unexplained. Unless you are a science fiction fan or obsess over spy novels, these kinds of attacks aren’t top of mind when anticipating what dangers are out there.

As psychologists and counterterrorism scholars, we’re interested in malevolent creativity. Novelty is not solely the purview of the “good guys” – those who seek to cause harm are as capable of generating creative ideas as everyone else.

So why do people tend to dismiss these types of novel threats, leaving themselves less protected? What social scientists call “the originality bias” provides insight into why it’s so easy to forget that adversaries may be developing new tactics in pursuit of their malevolent goals.

What makes a novel threat easy to miss

Although many people report a desire for new things and fresh ideas, studies find most are surprisingly resistant to novel thinking.

People often show a preference for the unoriginal. You can see it in the popularity of entertainment options like the ninth “Fast and Furious” movie or the latest Marvel Cinematic Universe offering. Gadgets are often designated by variant numbers – think iPhone 13 – emphasizing they’re an iteration of the familiar. And people tend to make mistakes when assessing the most novel ideas.

Such biases may have served humans well over the course of evolution, limiting the inclination to grab an unknown berry or trudge off into an ominous, freshly discovered cave. Although neutral or even helpful in many scenarios, this originality bias also has more worrisome implications if it means missing novel threats. Here’s how it can happen.

To start, novel ideas by definition are difficult for people to assess based on previous experience. A bullet, for example, causes a wound. But a novel weapon may not leave as clear an indicator of harm. The impact of novel ideas can be harder to see and so easier to dismiss.

Evaluating novel ideas is also more cognitively demanding. There’s a lot more to figure out around an emerging or even theoretical technology like a microwave weapon compared with a well-known explosive compound. 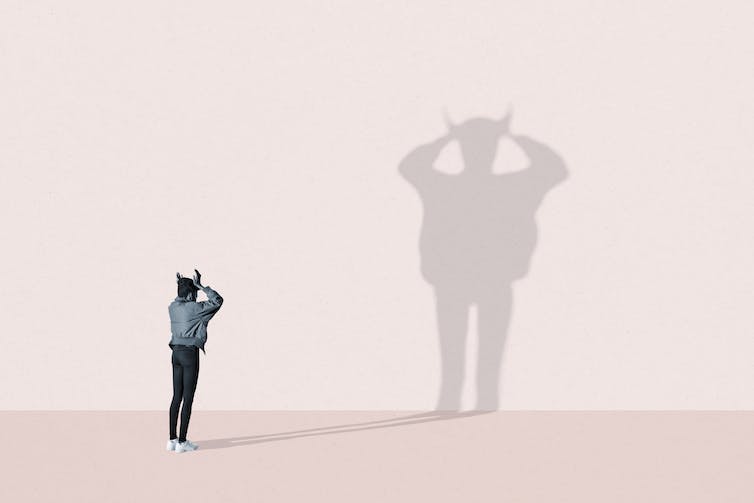 It can be hard to decipher the danger of something you haven’t encountered before. Klaus Vedfelt/DigitalVision via Getty Images
–
And because a novel threat is by definition unknown, no one is scanning the horizon for it specifically. Before the terrorist attacks on 9/11, for example, there were fewer security checkpoints. Before Abe’s assassination, most in his circle were not scanning for makeshift guns, since Japan has few firearms and makeshift guns were often dismissed as a viable threat.

There are also social or interpersonal reasons for ignoring or missing original ideas. Fresh ideas often threaten the status quo and may put some people at a disadvantage. Consider a security company that sells bulletproof glass. If a novel threat can travel through the glass, that company may be reluctant to tell others that their product is of limited use against it. People may prefer to set aside the risk from a novel threat to protect the current way of operating.

Finally, it can be uncomfortable or embarrassing to discuss novel ideas and your views of them. A researcher may be reluctant to write about Havana Syndrome because of a fear of losing credibility if their take on what’s going on turns out to be wrong. Being wrong can diminish your view of yourself as well as how others see you, and it’s more common with novel ideas precisely because less is known about them.

Seeing past the originality bias

For all these reasons, people are often less well defended against novel threats, even though such threats have the potential to do great harm. How can those who work in law enforcement and the broader homeland security enterprise guard against the originality bias while guarding against threats? Work in organizational psychology and design thinking offers a few potential avenues to support breaking natural tendencies toward the predictable.

These ideas are aimed in particular at organizations and people who focus on countering violent extremism. But they provide some guidance for anyone else who also wants to work on the cognitive blind spot created by the originality bias.

And remember, it’s important not to equate novelty with danger. New ideas may be boring and rightly dismissed. They can also be first steps toward amazing innovations that should be pursued. In many respects, failure to grapple with the originality bias can come at significant cost.

University of Nebraska Omaha provides funding as a member of The Conversation US.

Write an article and join a growing community of more than 151,200 academics and researchers from 4,461 institutions.