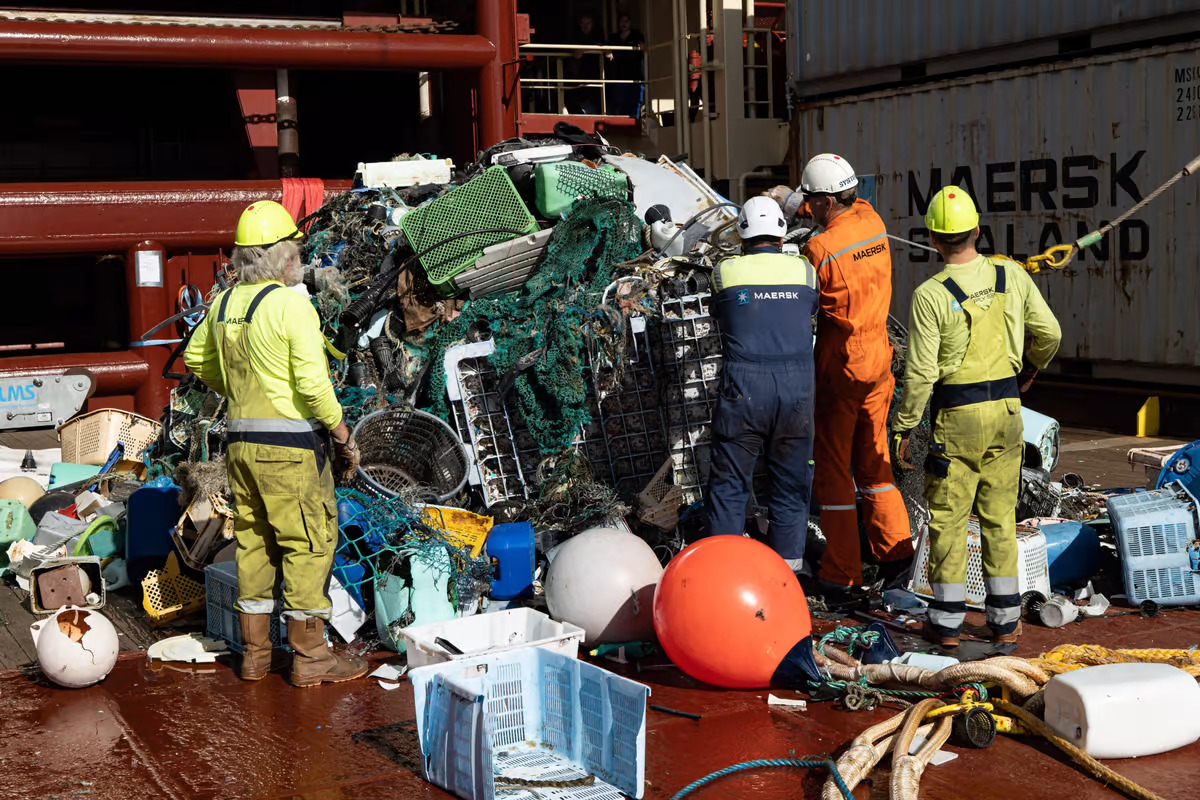 Much of the debris consists of items such as buoys, floats, crates and buckets.  The Ocean Cleanup.
–
By Ben Coxworth
–
Located in the North Pacific Ocean, the Great Pacific Garbage Patch (GPGP) covers an area measuring approximately 1.6 million sq km (617,763 sq mi). It’s made up of a roughly estimated 1.8 trillion pieces of floating plastic debris, with a total weight of around 88,000 tons (80,000 tonnes).
–
Founded in 2013 by Dutch inventor Boyan Slat (when he just 18), the Ocean Cleanup project has since set about removing as much of that plastic as possible, slowly but steadily decreasing the size of the GPGP. The plastic is gathered by a huge floating U-shaped barrier, which is towed through the water by ships located at either end.

When most people think of the Garbage Patch, they likely picture it being full of “land-dumped” trash such as plastic bottles, bags or product packaging … and such waste does reportedly make up the majority of marine plastic pollution in general, as it’s carried by rivers into the sea.

When it comes to what makes up the GPGP specifically, however, the Ocean Cleanup project has just announced that 75% to 86% of the plastic comes from offshore fishing activity. These figures are based on the analysis of over 6,000 hard plastic objects measuring over 5 cm (2 inches) in size, that were collected by the project in 2019. While these items included things like buoys, floats, crates and buckets, it should be noted that nets and ropes were not counted in the survey.

So, why the predominance of fishing gear?

The study states that thanks to wind patterns and ocean currents, “plastic lost at sea has a higher chance of accumulating offshore than plastic emitted from rivers, leading to high concentrations of fishing-related debris in the GPGP.” It was additionally found that based on brand names, printed text language and other clues, the majority of the items likely came from Japan (34%), China (32%), the Korean peninsula (10%) and the US (7%).

“To stop the inflow of plastic into our oceans, addressing river emissions – the largest source – must remain core priority,” said Slat. “However, to ensure our work to clean up the GPGP is truly sustainable, fishing gear inputs must also be stopped. We hope our latest study will enable organizations and the fishing industry itself to address this other source of plastic pollution [in] the GPGP.”

A report on the project’s findings has been published in the journal Scientific Reports.