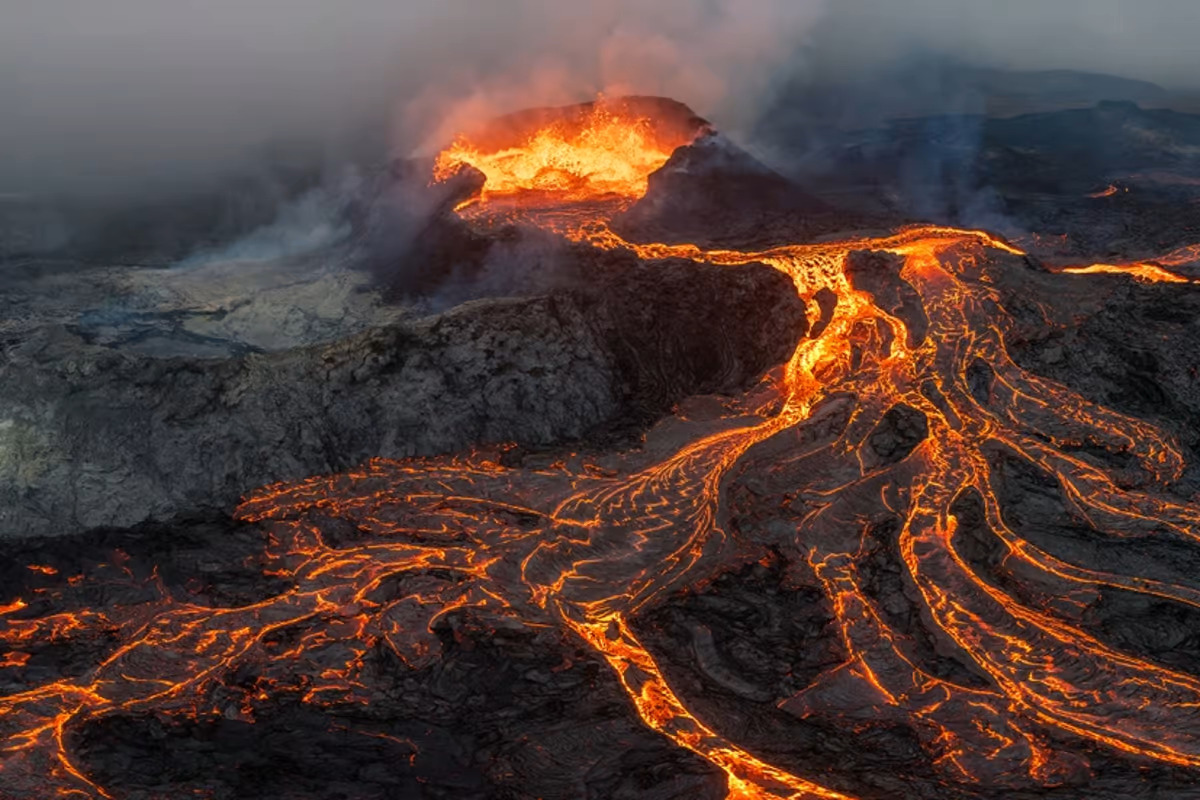 Highly Commended – Nature. Thousands of earthquakes shook the Reykjanes peninsula in an orchestrated prelude to an eruption, until the floor of the Geldigadalir valley gave way to the uncontainable magmatic pressure and split open, letting molten rock gush forth in an awe-inspiring spectacle. Iceland, 2021.  Luís Manuel Vilariño López  View gallery – 20 images
–

Only in its fifth year, the Drone Photo Awards has quickly become one of the world’s best aerial photography competitions. Spanning seven categories – including Urban, Nature, Wildlife and Abstract – the contest includes all kinds of airborne photography, from helicopters and unmanned aerial vehicles, to rockets, kites, and parachutes.

Photo of the Year. A secondary fissure happening a few hundreds meters from the main crater of Fagradalsfjall volcano, during the very last eruptive phase. Captured as a storm was hitting west Iceland, with rain and strong winds. Due to the difficult conditions, a drone capture like this is unique.  Armand Sarlangue
–

The overall Photo of the Year award went to French photographer Armand Sarlangue. Titled Big Bang, the stunning image was taken in September 2021 when the Fagradalsfjall volcano in Iceland was erupting. Sarlangue’s incredible shot looks down on a secondary fissure opening up several hundred feet off the main crater.

The highlights from this year’s contest really illustrate how the art of drone photography has evolved from its early days just a few short years ago when every single image was a simple top-down “god’s eye” image. Now, drone photographers are experimenting with different horizon lines, and taking advantage of the unique possibilities of the medium.

Shots like Nansen Weber’s lovely portrait of a polar bear take advantage of the way drones can approach animal subjects in ways conventional photography cannot, while Satti Mohammed’s stunning glimpse at a massive looming dust storm over an ancient African city is a reminder unmanned aerial vehicles can maneuver into positions too dangerous for humans.

Of course, the contest also offers some new takes on old favorite drone shots, such as the classic shadows playing basketball. And there is still plenty of life in the traditional top-down drone shot, just as long as the photographer is clever enough to pick the right target.

Yura Borschev’s surreal look at a basketball court engulfed after a sand storm is a perfect example of a wonderfully strange and novel sight.

Take a look through our gallery at more highlights from this sensational photo contest.