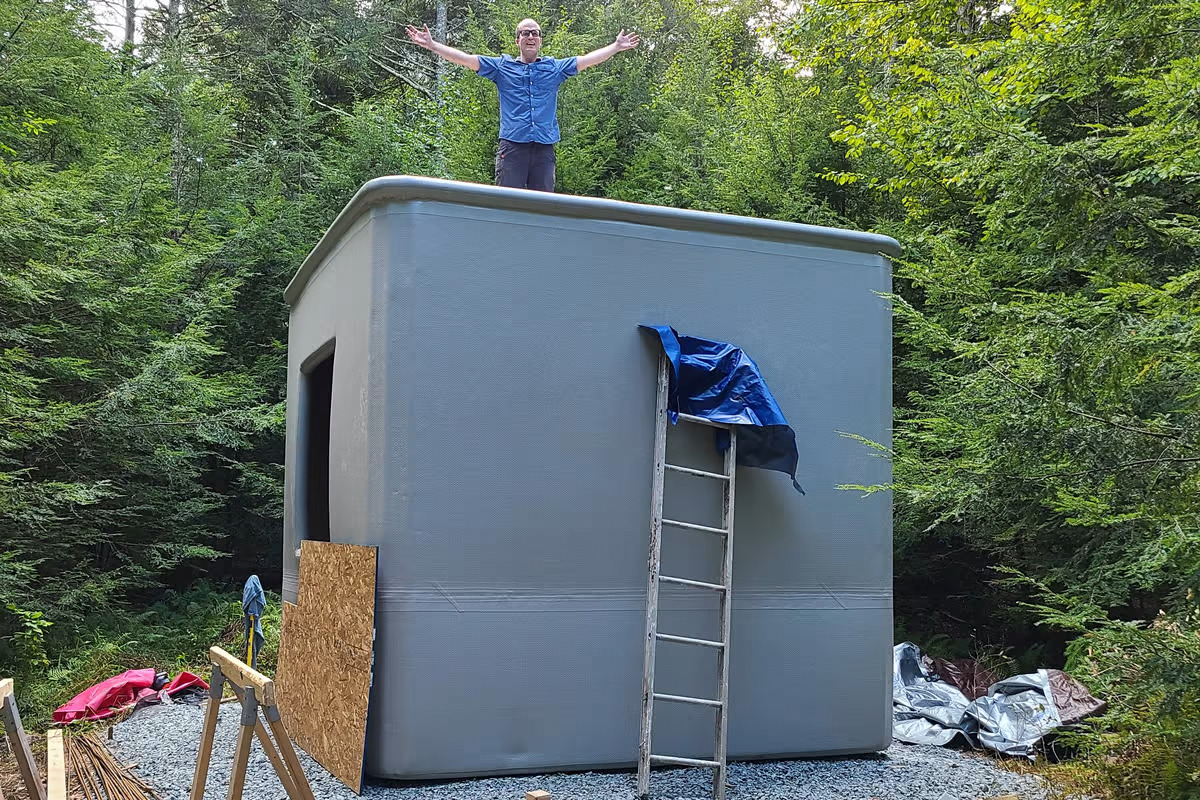 When we last heard from Bell, he had created a quirky front-wheel-drive bike with under-the-seat steering, known as the Bellcycle.

His new construction technique, called Inflatable Flexible Factory Formwork (IFFF), has been commercialized via his New York City-based startup, Automatic Construction. Here’s a quick explanation of how it works …

The process begins with a truck delivering a rolled-up PVC (polyvinyl chloride) fabric “form” to the construction site. That flexible form is not unlike a giant version of a rolled up, deflated camping mattress.

After the form has been laid in place, air pumps are used to inflate its walls and roof. This causes it to pop up, taking on the three-dimensional shape of the finished structure. Next, locally sourced wet concrete is pumped into the walls and roof of the form, displacing the air inside.

Once that concrete has set, the result is a solid concrete building shell. The form is not removed from that shell, since it now serves as a waterproof, airtight, and thus energy-saving barrier. Features such as doors, windows, interior drywall and exterior siding are then added.

In the prototype structures created so far, rebar reinforcements have also been added onsite. However, Bell tells us that he ultimately hopes to have the rebar, tension cables and other reinforcing elements preinstalled within the forms.

But just how quickly do the buildings go up?

“For our 100 square foot [9.3 sq m] and 200 square foot [18.6 sq m] prototypes, the inflation took seven to 10 minutes with air,” he said. “Then the concrete pump filled them in 1.5 hours. Including labor, our prototypes only cost $20 per square foot. This is significantly cheaper than anything else.”

Bell’s team is now selling homes direct to customers in New York’s Hudson Valley, with one project currently underway and another two signed. He tells us that his company has also signed one contract with a “large commercial contractor” to deliver a structure, and signed another contract to deliver a box culvert to an infrastructure contractor.

Along with homes, commercial buildings and infrastructure-related projects, other envisioned applications of the IFFF technology include swimming pool foundations, rapid-deploy military structures and perhaps even one day skyscrapers, or structures on Mars for use by astronauts.

5 comments
Sign in to post a comment.
Please keep comments to less than 150 words. No abusive material or spam will be published.
TangoBravo – 2022 Sep 15 – 12:38 PM
New invention, lol. Monolithic, a company in Texas, has been building this type of structure all over the US for more than 2 decades that I know of. Some 15 years ago, the last time I checked, you could rent the inflatable bags and everything else from them. They even had/have classes where they teach how to build them to anyone interested. I am sure they can answer any questions Mr. Alex Bell might have in dealing with structural reinforcement engineering.
I have no association with Monolithic. I just like to keep tabs on things given the fact that I am a trained Civil Engineer.  lol
paul314 – 2022 Sep 15 – 12:49 PM
If it’s anything like the buildings I’ve seen poured with fabric formwork, right angles, straight lines and flat surfaces are not something you’re going to get. A lot of people may be ok with that in return for speed and low cost. (And if the outside is getting some kind of siding and the inside is getting insulation and sheetrock, no one will see the concrete.)
TechGazer – 2022 Sep 15 – 02:57 PM
Yes, more anti-green concrete buildings are just what the world needs.
Where rapid construction is critical, there must be other, superior methods. Furthermore, such applications probably don’t require the durability of concrete (it might even be a downside when the need for the building passes). I expect that most situations requiring rapid construction don’t have a concrete supplier nearby.
As a concrete construction method, I don’t see why this method is superior to popping up a fabric&frame (or inflated fabric/plastic) form and spraying concrete on it. I think the latter technique provides better control over deformation (bulging, bending). Tightly-controlled inflatable forms are probably complex and thus expensive, and probably make it difficult to flow the concrete evenly.
Not impressed.
LiamKoot – 2022 Sep 16 – 03:03 AM
Definitely not a new technology at all. Wallace Neff was creating “bubble” houses back in the 1930’s which were formed by inflating a balloon/bladder and covering with concrete. I remember seeing this same type of construction techniques in South Africa as affordable housing. At least the bubble/igloo houses allowed you to have proper reinforcing in the concrete which made them near extremely strong.
Alex – 2022 Sep 16 – 06:23 AM
Hello All, thanks for comments.
Monolithic/bubbles/ https://iass-structures.org/ has done great work as an engineering association over the years covering these kinds of structures. They are quite different than Automatic Construction as they are curved domes vs flat walls/sides. Also they use shotcrete over laid forms vs our cast walls. So different in terms of labor required.
–
Tweet