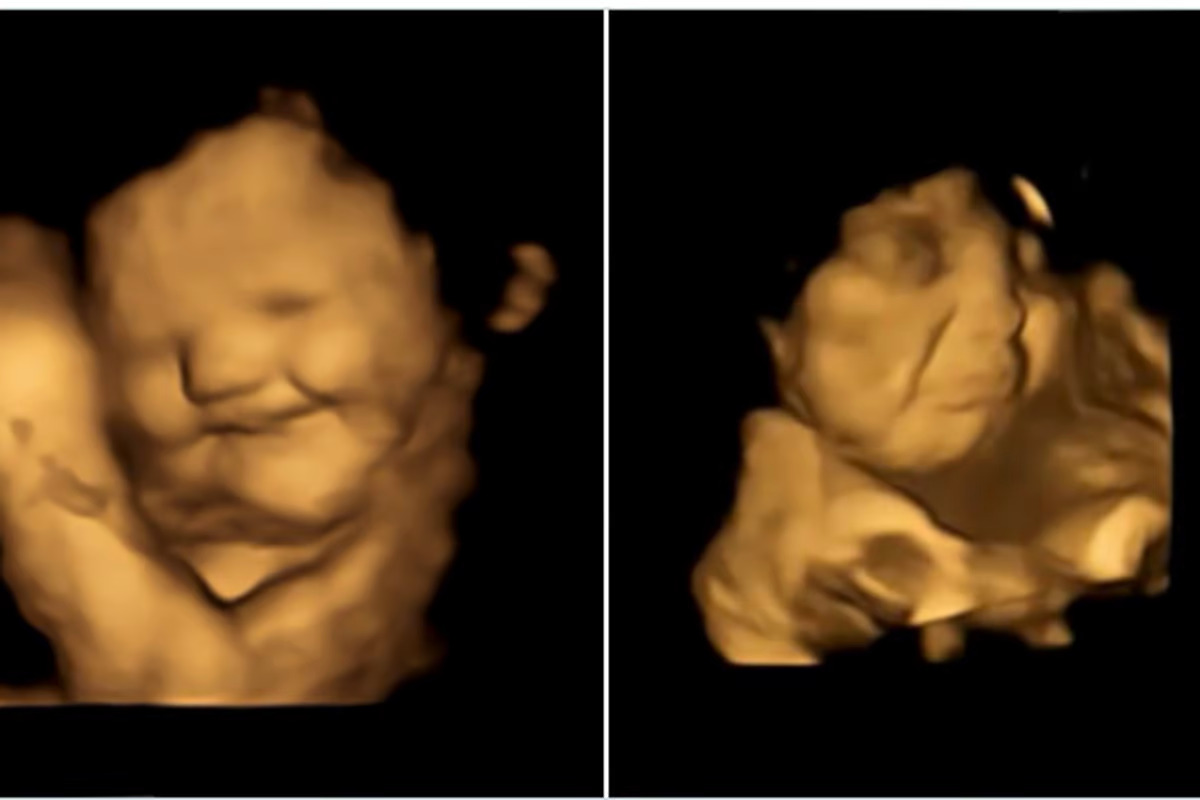 On the left is a baby happily responding to the sweet taste of carrot and on the right is a baby grimacing at the bitter taste of kale.  FETAP (Fetal Taste Preferences) Study, Fetal and Neonatal Research Lab, Durham University

–
By Rich Haridy
2022 Sep 25
–
An extraordinary new study has recorded the first evidence of babies in the womb reacting to flavors of foods eaten by their mothers. The stunning images show fetuses crumpling up their faces in disgust minutes after a mother consumes bitter kale or smiling with glee in the presence of sweet carrot flavors.

Anecdotally, most mothers will tell you their babies were incredibly responsive to certain foods or drinks. Feeling the little one aggressively kick or twirl within minutes of particular foods being consumed certainly suggests fetuses can respond to specific flavors, but research has still been a little unclear on how this is happening.

We know taste buds have developed in a fetus by around 14 weeks of gestation. There is also evidence showing certain flavor molecules from food can cross over into amniotic fluid. So some researchers have hypothesized taste preferences in young children could be influenced by exposure to certain foods during pregnancy.

“A number of studies have suggested that babies can taste and smell in the womb, but they are based on post-birth outcomes while our study is the first to see these reactions prior to birth,” explained lead researcher on the new study, Beyza Ustun. “As a result, we think that this repeated exposure to flavors before birth could help to establish food preferences post-birth, which could be important when thinking about messaging around healthy eating and the potential for avoiding ‘food-fussiness’ when weaning.”

To explore this hypothesis the new research turned to 4D ultrasound technology, a valuable way to image fetal movements with great detail. Around 100 mothers were recruited, all in their final trimester of pregnancy.

Participants were divided into three groups: a control undergoing a 4D ultrasound with no intervention, and groups consuming either a kale or carrot powder capsule around 20 minutes before the scan. The subsequent ultrasound procedure lasted for around 25 minutes, allowing the researchers to track fetal movements over a significant period of time.

The incredible results showed those fetuses exposed to kale made more “cry-face” responses compared to the carrot-exposed fetuses making more “laughter-face” responses. These faces were in contrast to the control group showing more consistently neutral faces in fetuses not exposed to any flavor.

Jackie Blissett, co-author on the new study, said kale and carrot were chosen due to their different flavor profiles. Kale features strongly bitter characteristics, while carrot is often found to be a sweet vegetable. Interestingly, Blissett does note it is unclear exactly what flavor molecules are affecting the babies, particularly since sugar, for example, wouldn’t be contributing to the sweet positive response from the carrot.

“We don’t think the fetus will be responding to ‘sweet taste’ per se because the sugar in amniotic fluid is tightly controlled in healthy pregnancy,” Blissett explained on Twitter. “But the fetus could be responding to other things such as other flavors of the food, and even Mom’s own responses to tasty foods.”

The findings certainly raise a whole host of questions to be explored in future research projects. Do these fetal responses diminish over time if a mother consumes strong flavors consistently during pregnancy? And do these flavor responses in utero correlate with food preferences when a baby begins eating in later life?

“It could be argued that repeated prenatal flavor exposures may lead to preferences for those flavors experienced postnatally,” speculated Blissett. “In other words, exposing the fetus to less ‘liked’ flavors, such as kale, might mean they get used to those flavors in utero. The next step is to examine whether fetuses show less ‘negative’ responses to these flavors over time, resulting in greater acceptance of those flavors when babies first taste them outside of the womb.”

A follow-up study has already begun tracking the same babies imaged here in their first months post-birth. The plan is to see what their responses are to both carrot and kale when they reach the age they can start eating solid foods.

The new study was published in Psychological Science.