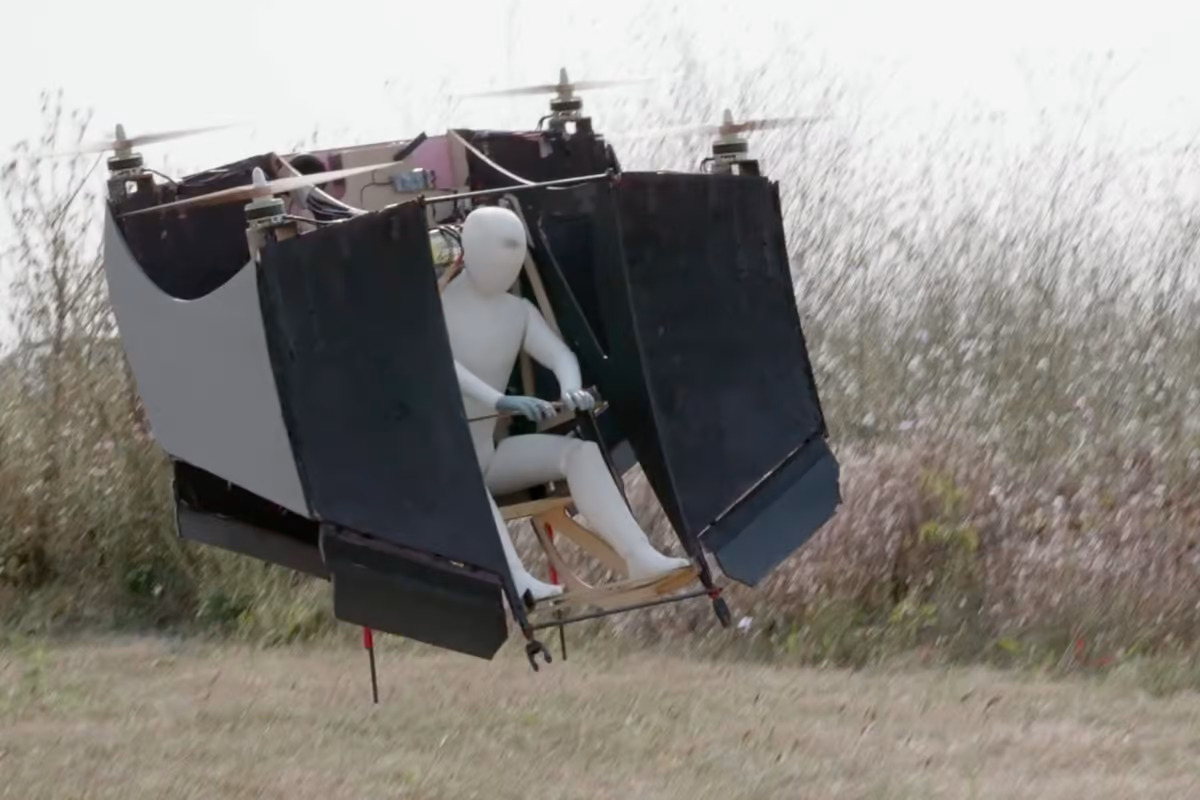 We first encountered Romania’s Razvan Sabie in 2019, when he showed us a working prototype of his ADIFO UFO design: a hyper-agile flying disc designed to hover like a drone, or treat its entire body as a super low-drag wing surface in jet-propelled horizontal flight, at speeds that could theoretically break the sound barrier. Very neat.

Now, Sabie has turned his attentions to the eVTOL world, and come up with another highly innovative and interesting design. The Mad Bat is an electric VTOL airframe designed to scale from small drones, to single-seat personal aircraft, to multi-seat air taxis and way beyond.

It sucks a lot of precious energy to hold an aircraft off the ground in a hover, so most eVTOL designs these days have wings attached, and some way of transitioning from vertical to horizontal flight, where they can act more or less like a conventional fixed-wing plane and save a ton of power. Some of them use tilting propellers, some use separate propulsion systems for lift and cruise flight, and there are plenty of other ideas around as well, each with its own advantages and drawbacks.

We haven’t seen one like the Mad Bat before, though. Effectively, it operates something like a heavily modified tail-sitter. Tail-sitters are a very simple form of VTOL aircraft – picture an airplane with enough propulsion to be able to point its nose straight up and hang in the air, and then enough structural reinforcement to come down for a gentle landing sitting on its tail.

You don’t see a whole lot of tail-sitters in the eVTOL world, with the notable exception of the Zeva UFO. That’s because eVTOLs are being developed as passenger transports, and it’s fair to assume passengers will generally want to sit in a nice, horizontal seat rather than getting into one pointing straight upwards, or lying on their bellies and flying head-first, Superman-style, like they will in the Zeva.

The Mad Bat solves this problem with brilliant simplicity. It’s a tail-sitting airframe mated to a swinging cabin, with heavy battery packs in the bottom of the cabin to keep it more or less upright at all times. You take off, and start to fly forward, and as the cabin stays level, the propulsion system tilts further and further forward until it’s fully horizontal, moved not only by asymmetrical thrust from the propellers, but by increasing wind resistance as the speed comes up. There’s no need for a powered system to change the wing angle, just some kind of system to dampen the rotation of the cabin and make sure it doesn’t swing about.

In this way, the Mad Bat starts developing lift from its wing surfaces very early in the transition to forward flight, and once they’re fully horizontal, it acts something like a box-wing biplane. There are four sets of landing gear on the back/bottom edges of the wings, plus another set under the cabin. This gives it the very handy ability to take off and land like a conventional aircraft where a runway is available – although hauling the wings from a VTOL configuration up onto just two wheels for conventional takeoff might not be the world’s easiest operation. In case of total system failure, the Mad Bat can deploy a paraglider canopy, allowing the pilot the chance to bring it down gently.

Flexible and simple in the air, the Mad Bat uses no complex mechanical tilting systems, and since it uses the same motors and props for lift as for cruise, there’s no redundant lift propellers adding drag and weighing the design down. The design also shines on the ground, where its tail-sitting four-thruster configuration gives it a small footprint, allowing easy ground transport, garage parking and charging logistics.

Sabie intends to shield bystanders from the props using ducts – but in a patent application for the design, he outlines an intention to use these duct fairings to leverage the Coanda effect, or the tendency of fluid jets to follow a curve, to increase thrust for takeoff. The patent describes an air compressor driven by the shaft of each propeller, feeding a complex-looking series of pressure chambers, ducts and ejection slits running through the leading edges of the ducts and the wing behind the propeller, to which a small, secondary airfoil is mounted.

This arrangement is designed to drive a larger mass of air at lower speeds, while ensuring a uniform boundary layer along the upper side of the wing. Similar systems could be used with combustion engines for longer-range flight, Sabie notes, and they could be shut off once in horizontal flight for added efficiency.

Sabie has built a prototype, a bit bigger than a milk crate, and flown it successfully in hover and transition modes. He says the concept will scale up as far as Mad Bats big enough to drive your car into, turning any old jalopy into a bona fide flying car provided you’re satisfied the process isn’t going to scratch up your duco.

It’s another fascinating design, and we look forward to seeing where it ends up. Learn more in the video below.
–
https://vimeo.com/745573635?embedded=true&source=vimeo_logo&owner=91027017