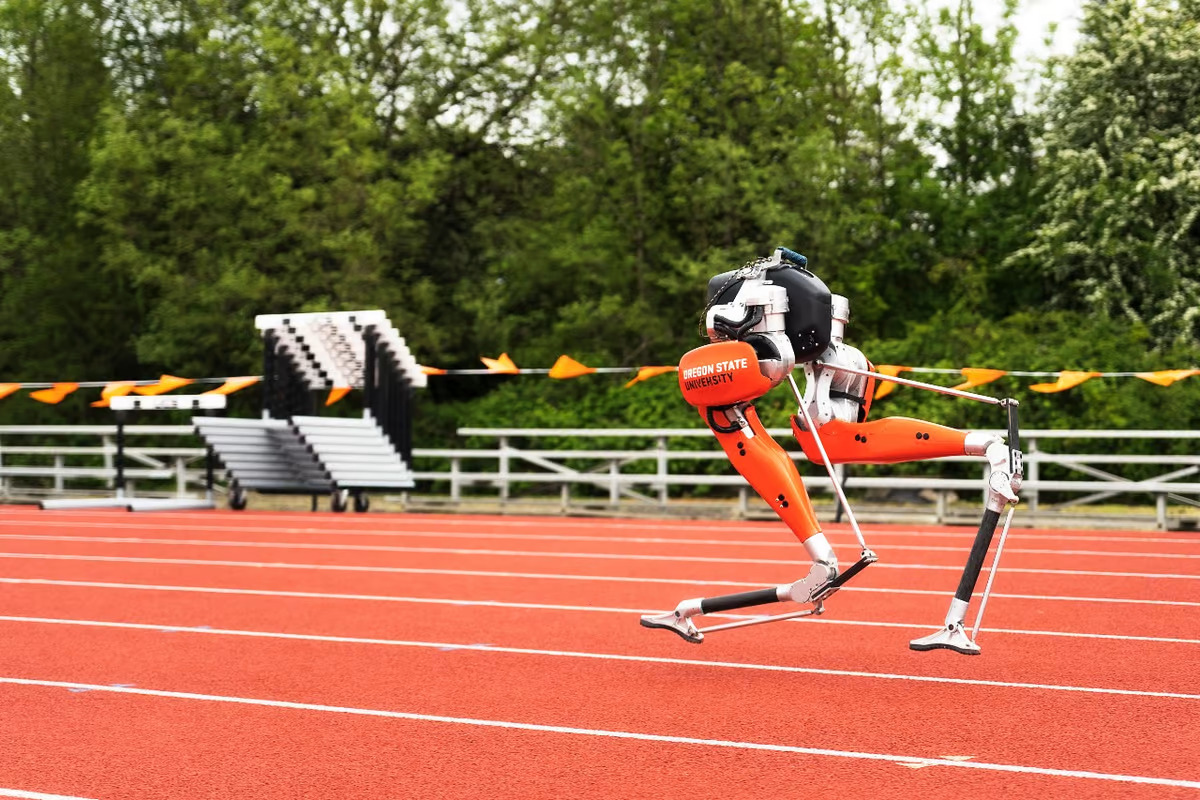 Cassie is the brainchild of Agility Robotics, a spin-off company from Oregon State University, and was introduced in 2017 as a type of developmental platform for robotics research. And Cassie has continued to come along in leaps and bounds since then, in 2021 demonstrating some impressive progress by completing a 5-km (3.1-mile) jog in just over 53 minutes.

This achievement involved the use of machine learning algorithms to equip the robot with an ability to run, overcoming its unique biomechanics and knees that bend like an ostrich to remain upright. With this capability, Cassie joined a group of running bipedal robots that include the Atlas humanoid robot from Boston Dynamics and Mabel, billed as the world’s fastest knee-equipped bipedal robot. But in optimizing Cassie for the 100-meter sprint, the researchers had to head back to the drawing board.

“Cassie has been a platform for pioneering research in robot learning for locomotion,” said Oregon State University graduate student Devin Crowley. “Completing a 5-km was about reliability and endurance, which left open the question of, how fast can Cassie run? That led the research team to shift its focus to speed.”

The team spent a week fast-tracking Cassie through a year’s worth of simulated training designed to determine the most effective gait. But it wasn’t simply a matter of speed. For the Guinness World Record to stand, Cassie had to start in a standing pose, and then return to that pose after crossing the finish line rather than simply tumble over. This meant Cassie had to use two neural networks, one for running fast and one for standing still, and gracefully transition between the two.

“Starting and stopping in a standing position are more difficult than the running part, similar to how taking off and landing are harder than actually flying a plane,” said artificial intelligence professor Alan Fern. “This 100-meter result was achieved by a deep collaboration between mechanical hardware design and advanced artificial intelligence for the control of that hardware.”

Ultimately, Cassie completed the 100-meter sprint in 24.73 seconds, establishing a Guinness World Record for a bipedal robot. This is a great deal slower than the sub-10-second times run by the world’s best sprinters, but the researchers believe progress will only accelerate from here. Guinness World Records points out there are other records held by fast-moving robots, but as this one is based on a standard competitive task undertaken by humans, it is a “concrete milestone in robot locomotion and real-world capability.”

Check out Cassie’s record-setting dash in the video below.

Nick Lavars
Nick has been writing and editing at New Atlas for over six years, where he has covered everything from distant space probes to self-driving cars to oddball animal science. He previously spent time at The Conversation, Mashable and The Santiago Times, earning a Masters degree in communications from Melbourne’s RMIT University along the way.
–
6 comments
Sign in to post a comment.
Please keep comments to less than 150 words. No abusive material or spam will be published.
spyinthesky – 2022 Sep 28 – 03:25 AM

Not really a big issue but the video says 27.72 seconds. Perhaps it did further runs.

When I ran,that was about my speed,which worked out to about 7:15 minute per mile,which was not exactly awe-inspiring. Baby steps,I guess…

stevendkaplan – 2022 Sep 28 – 07:44 AM
Behold the first step to developing the AT-ST walker from Star Wars or the Sentinel walkers from Warhammer 40k!
In all seriousness though this is a fascinating breakthrough in walking robots. Hopefully future versions will both be faster and better able to travel in a straight line as I noticed the robot in the video had a habit of swerving off course into the neighboring lanes.
Bob Flint – 2022 Sep 28 – 09:21 AM

Is it just me, or does it look like an Ostridge, missing long slender neck, some feathers may help balance here as well.

The description of the leg having a backwards knee is wrong. The robot has a short thigh, a forward facing knee,a long shin and what looks like it’s knee is it’s ankle. People do this over and over again in describing birds legs