Ranchers are increasingly being forced to sell off parts of herds and seeing cows perish as drought conditions worsen. 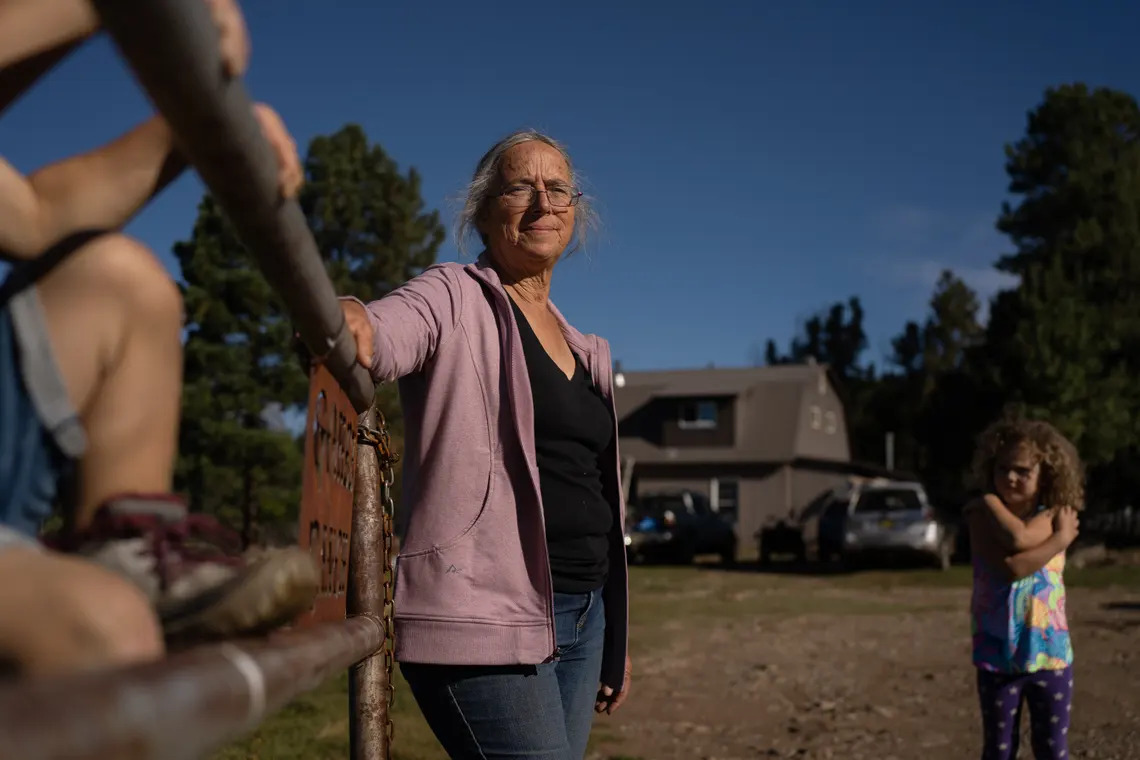 Carla Gómez, a rancher in Mora, New Mexico with her grandchildren. In April she had to flee her ranch to escape the largest wildfire in the state’s history. Photograph: Ramsay de Give/The Guardian

About this content
Last modified on 2022 Oct 02
–
In April, Carla Gómez found herself seeking shelter in the city of Las Vegas, New Mexico, not just for her but also for 75 of her sheep.

When flames had started creeping down the Sangre de Cristo Mountain range towards Los Vallecitos, her beef and lamb ranch in Mora county, she knew she had to flee. The fire was part of what would become the largest wildfire in the state’s history, and her farm was directly in its path.

For five weeks, Gómez watched the news, anxiously awaiting updates. In early June, when it was finally safe to return, she found that about 100 acres of her 400 acre ranch had burned but her house was still standing and the cows she had to leave behind were alive. Many of her neighbors weren’t as lucky.

“People who had forest permits, they really suffered because they had to relocate their cattle,” said Gómez, referencing the Treaty of Guadalupe Hidalgo, which granted forest lands for grazing to Hispanic residents of New Mexico at the end of the Mexican-American war, and which have been passed down for generations. “It’s been really devastating.”

The wildfire is just one – albeit especially devastating – impact of a pervasive drought facing the American southwest and its ranchers.

Ranching in the southwest has always been a difficult business. Unlike the verdant pastures of the midcentral or mid-Atlantic states, rangeland in places like Arizona, New Mexico and west Texas is vast, but also historically unpredictable, with more dry years than wet. Now, scientists are reporting that the drought that began in 2000 is the driest megadrought the region has experienced in 1,200 years.

Many ranchers – some of whose families have been herding cattle in the southwest for more than a century – are asking whether their grandchildren will be able to continue the tradition.

About 25,000 cattle ranches are located in the American southwest. But as drought conditions worsen across the region, two-thirds of ranchers are reporting that they have had to sell off parts of their herds, according to a survey conducted by the American Farm Bureau Federation this Summer. Average herd sizes are expected to have fallen 36% across the region in 2022, a figure that rises to 43% in New Mexico, and 50% in Texas.

Increasingly dry and hot conditions across the US are also killing animals. In June, extreme heat killed 2,000 cattle in Kansas.

In the past, the federal government would kick in subsidy payments to ranchers during dry years as a temporary measure to help them survive. However, over the last decade, these temporary programs have become seemingly permanent – ways to support ranchers as they struggle to supply their cattle with adequate food and water, or are forced to reduce the size of their herds.

When the southwest’s monsoon season began in mid-June, Gómez and her neighbors in Mora county quickly realized that the fire had done more than burn vast swaths of forest. As rainwater rushed off the mountainside, with little vegetation to slow it down, silt gathered in the county’s acequia, a community-operated irrigation system brought to the southwest by Spanish settlers who first learned the technique from the Moors.

“Right now, the acequia isn’t even running,” Gómez said. “But every time it rains, it just refills with silt.” She knows the community will prioritize cleaning out the acequia for future use, but it will take a lot of labor. In the meantime, ranchers and farmers living along the burn scar of the wildfire are facing extreme flooding, which could devastate their hay crops.

Farther east, along the New Mexico border with Texas, Joe Culbertson Jr and his family watched the wildfire smoke blanket the sky as they drilled for water. Since the 1930s, five generations of Culbertson’s family have herded cattle at W O Culbertson and Sons in Harding county. Traditionally, ranchers supplied their cattle either with rainwater collected in earthen tanks or water pumped up from wells. In the past few years though, Culbertson says, the water table has dropped, meaning they have had to drill deeper wells and haul water to care for their cattle.

“The drought has caused some strain on the water sources,” Culbertson said. But dealing with drought is just part of ranching in the southwest, he added, and although it seems like the southwest is in a long-term drought, “that doesn’t mean you can’t have good years”.

Besides affecting their water supply, the drought has also affected ranchers’ ability to feed their cattle. Usually, they send their herds out to graze on the grasses that grow on the land – but may supplement the cows with crops grown during the Summer or store-bought feed during Winter. But extreme drought has meant 71% of ranchers have removed their cattle from rangeland due to insufficient forage, forcing them to buy feed, which has risen in price.

On the Hopi reservation in Oraibi, Arizona – 500 miles west of Culbertson’s ranch – Lloyd Masayumptewa says the land on which his herd of about 70 cows grazes has begun to change, affecting the feed they have access to.

“The grasses aren’t able to hold the soil down any more,” said Masayumptewa. He says the wind has blown away much of the soil, leaving only the sandstone beneath, and invasive plants like tumbleweeds have replaced the grasses that once grew.

Darren Scott, a spokesperson for the Bureau of Land Management’s New Mexico office, says that drought conditions tend to favor plants that cattle may not eat: “Less palatable plants such as creosote are long-lived shrubs which persist even during exceptional drought conditions.”

Due to the drought, the Hopi tribal government asked ranchers to reduce or eliminate their herds last year. Masayumptewa and his family were not affected – but only because they had already cut their herd from 100 to 70 cows due to drought a few years previously.

The Bureau of Land Management and the Forest Service have also asked ranchers with grazing permits to reduce the size of their herds during periods of drought. “Typically, ranchers make the decision to reduce herd size on their own,” Scott said. “Many ranchers on BLM lands in New Mexico already have reduced herd sizes due to drought in previous years and have simply not restocked.”

While Culbertson says his family has enough acreage to run about 1,400 cows, they’ve kept the size of their herd closer to 1,200. “We try not to overgraze our country. That way we can go through periods of drought a little better,” he said. He remembers what happened back in 2011 to 2012 – a period of extreme drought in the southern US and México. The Culbertsons were able to feed their herd from the same grass two years in a row because they kept their herd at 900 cows.

The federal government has attempted to help ranchers. In the 2014 farm bill, a legislative package passed on average every five years to fund food and agricultural programs, Congress made the livestock disaster relief program permanent – a previously temporary measure to compensate livestock producers who had suffered grazing losses due to drought.

In 2021, as drought returned, the USDA announced further measures to support ranchers to help cover the costs of hauling water and transporting feed for livestock. Earlier this year, the USDA introduced yet another program to compensate ranchers for the impacts of severe drought and wildfire over the last two years.

Although ranchers have already begun taking steps to adapt to the drought, scientists believe they may need to make more significant changes if cattle ranching is to continue in the southwest.

One suggestion, outlined in a 2020 article by researchers from the USDA, New Mexico State University, Texas A&M and other centers, is to consider switching to a type of cattle that has adapted to the extreme conditions of Sierra Tarahumara in northern México – Raramuri Criollo – which appears better able to survive in the heat and on low-quality grasses and shrubs. The researchers also recommended using sensors to monitor water levels in troughs, soil moisture, and herd grazing patterns for “precision ranching” that allows a rancher to respond to changes faster.

Preparing a drought plan, including a strategy for reducing herd size, is important, according to researchers at New Mexico State University. But as the drought continues, it may eventually have an impact on the availability of beef in the US.

In the midst of monsoon season, the future of ranching seems more hopeful. “If we continue to get this type of rain, it might help,” said Masayumptewa. “But certainly if we go back to where conditions were really bad … ” he trails off.

Masayumptewa says it’s difficult to imagine a future where he’s not able to ranch his family’s livestock; it’s something he grew up doing. “You’re accustomed to dealing with those animals for your entire life. And then to give it up – it’s just, you’re so attached to it. It’s kind of like they’re family,” he said.

For many southwestern ranchers, their livestock are more than a source of income. “You have to remember that ranching is not a job,” said Culbertson’s wife, Vivian. “It is a way of life.”