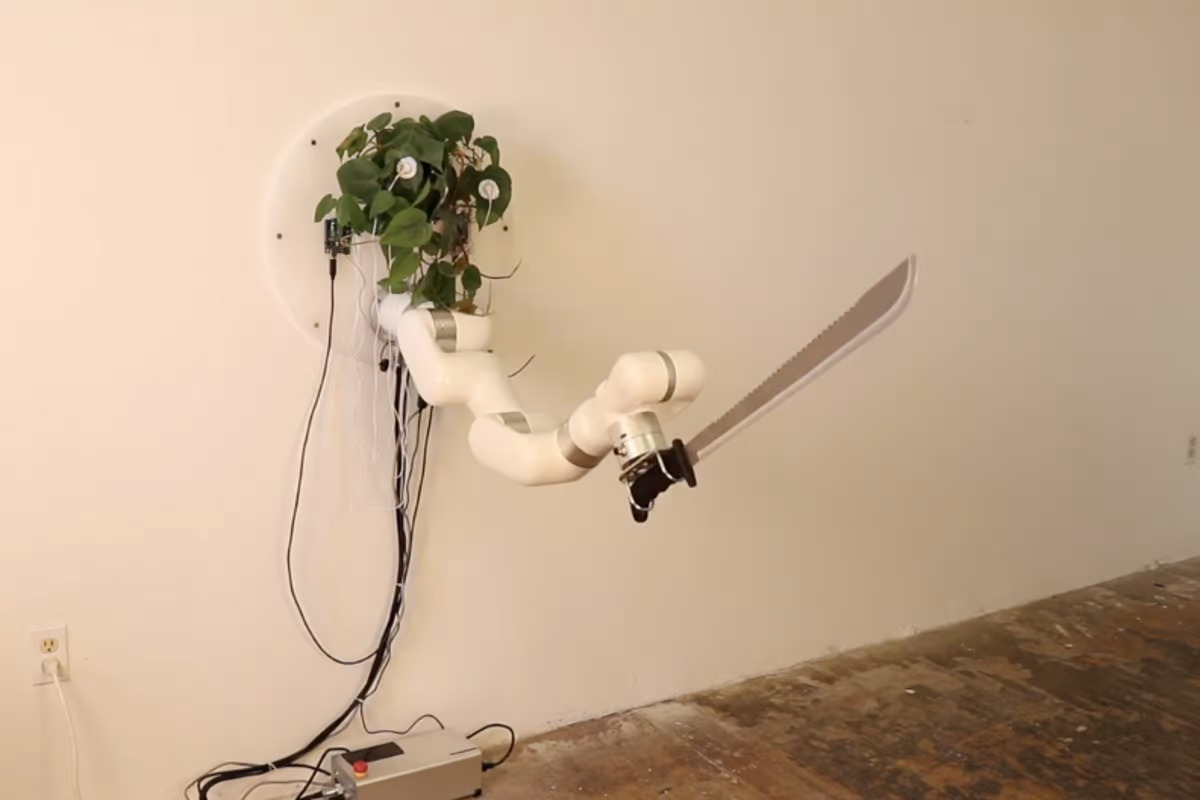 Bowen began his artistic career 20 years ago as a kinetic sculptor. While completing his MFA in the early 2000s he began incorporating microcontrollers into his work. Since then his pieces have often sat at the fascinating intersection between art, science and technology, translating datasets derived from natural systems into compelling mechanical sculptures.

His latest work, plant machete, is a perfect encapsulation of Bowen’s work – playful, absurd and thoughtful. The piece basically uses electrical signals gathered from the leaves of a houseplant to control a robotic arm holding a machete.    [Editor’s Note: What could possibly go wrong with this…?]

“I am using an open source micro-controller called an Arduino to collect variable resistance data across five of the plant’s leaves,” Bowen explained in an email to New Atlas. “Each leaf has an EEG adhesive pad attached to it which is wired to the analog input pins on the Arduino. There is also a ground wire from the Arduino in the soil of the plant. The signals received are basically variable resistance data across the leaves of the plant. This is similar to what you would receive from a potentiometer (aka an analog volume knob). This data is then directly mapped to the movements of the motors of the robot.”

The project is not the first of Bowens to explore plant signals. A similar recent work called plant drone used the same real-time resistance data to pilot a drone. The drone was mounted with an LED and a camera tracked the light path through the sky, creating a unique plant-controlled drawing.

Before working with plants (or “collaborating with plants” as Bowen likes to describe it) he created a number of pieces using data generated by swarms of flies. Sometimes swarms of flies controlled spotlights or blimps, other times the flies directed a robotic drawing arm creating unique patterns.

Bowen said his most surprising fly-controlled piece was a 2013 work called fly tweet. Here, a swarm of flies were housed in a plastic sphere with a computer keyboard. Tracking the fly movements by video, every time a fly landed on a specific key the corresponding character was entered into a twitter text box.

Another fly artwork Bowen is proud of is called fly revolver. Developed soon after the Sandy Hook school shooting, the piece is Bowen’s most outright political work.

Here, a swarm of flies in a sphere are tracked by video, with their movements controlling a device aiming a revolver. When a fly is detected in the center of a target within the sphere the trigger of the revolver is pulled. The flies essentially control where the gun is aimed and when it is fired.