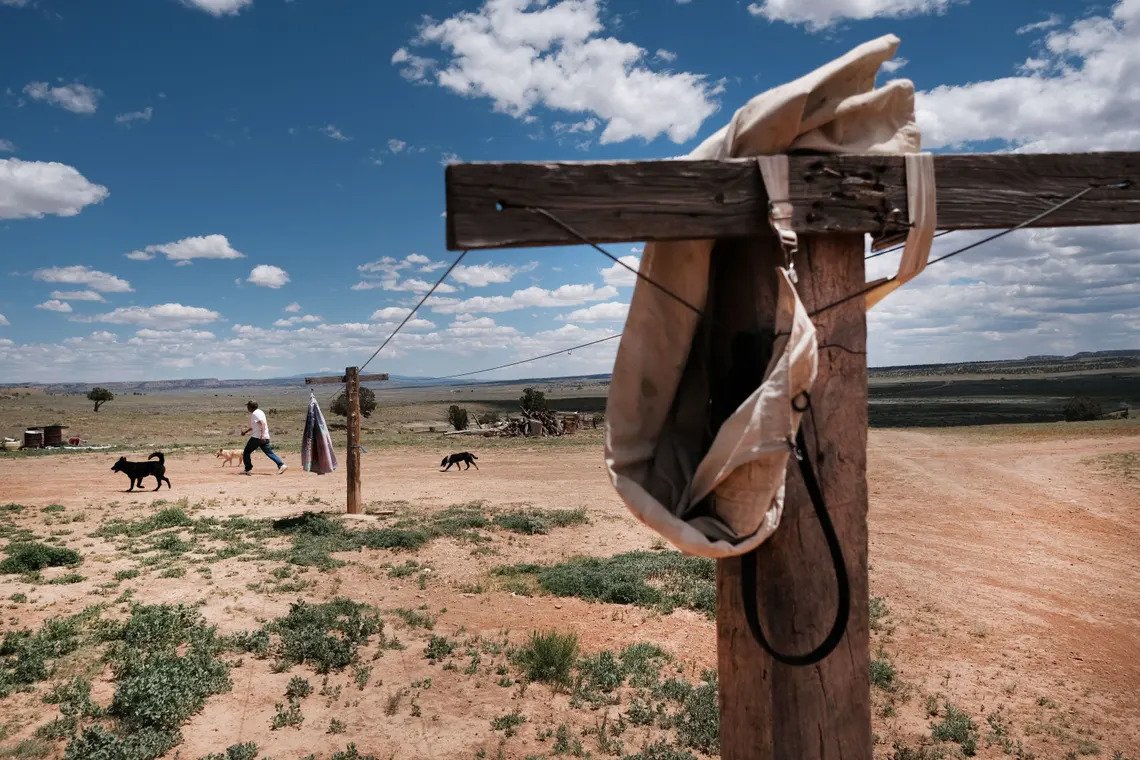 As the climate crisis chokes Arizona and New Mexico, tribal regions often lack natural resources and are most vulnerable to the impacts of drought.

By Annette McGivney in Dilkon, Arizona

About this content
–
Last modified on 2022 Oct 09
–
Candice Méndez grew up on the Navajo [Diné] reservation in a home that lacked running water and electricity. There was no phone service and few paved roads. A supermarket was miles away. But to Méndez, now 39, it felt like a time of abundance.

“We did not want for anything,” she said.

Méndez’s grandmother raised sheep on the family’s ancestral land and her grandfather farmed along moist, fertile gulleys. They ate corn, beans, squash and freshly butchered mutton. It was a self-sufficient lifestyle that had been much the same for centuries. But then in the early 1990s, things changed.

“All of sudden we were eating canned food,” said Méndez. “The land could no longer provide for us.”

As drought took hold in the high desert of northeastern Arizona, natural water sources dried up, making non-irrigated farming impossible. A rain-fed lake that watered the sheep and horses disappeared. A windmill that pumped groundwater stopped working. And vast rolling grasslands that had long sustained the livestock turned into sand dunes. In the mid 1990s, the family resorted to hauling water for their animals from far-away community wells. And they have been hauling it ever since.

Over the last three decades, the Navajo Nation – the largest Indigenous nation in the US – has felt the impacts of a warming planet much earlier and more dramatically than other communities in the southwest that have well-developed municipal infrastructure and abundant financial resources. Although people living in the reservation border towns of Flagstaff or Winslow have taken steps to cope with climate crisis by converting their yards to desert landscaping and installing air conditioning, Méndez and many other Navajo families are in a full-on struggle to protect their livelihoods and traditional connections to their homeland.

During Covid, the Navajo reservation made headlines for its lack of indoor plumbing and how nonprofit organizations and government agencies were coming to the nation’s aid. But on the ground, little has changed for Méndez and the thousands of others who are left to mostly fend for themselves as impacts from drought have worsened over the last several years.

Méndez now operates the family ranch with her sister and mother. When Méndez was young, her grandmother used to worry about the sheep and children getting lost in the tall grass. But today the big worry is hauling enough water and hay from 10 miles to 40 miles (16 km to 64 km) away to supplement what the land can no longer provide.

“At some point it may just get to be too hard and too expensive,” said Méndez who, along with her mother and sister, often drive more than 100 miles (160 km) a week to move thousands of gallons of livestock water over washed out dirt roads. But giving up comes at a high price. The sheep and horses on Méndez’s ranch are descended from a lineage that has been carefully tended by women in her family for at least five generations.

“If we lose these animals, we lose a big part of our identity,” she said.

Spanning more than 27,000 sq miles (70,000 sq km) across Arizona, Utah and New Mexico, the Navajo Nation is a vast landscape of slickrock canyons, sculpted buttes and expansive, high desert plains. The largely undeveloped land offers unbroken views of spectacular sunsets but is a tough place to make a living.

When the US government established the Navajo Nation in 1868, portions of the people’s homeland that were deemed valuable for natural resources were roped off and turned over to European colonizers. This included the Colorado River, which now supplies water to 40 million people, but excludes the Navajo Nation.

According to a multi-year study published in the journal Science last year, Indigenous nations have lost nearly 99% of their historical land base since Europeans arrived on the continent. Most of the homeland that tribes were allowed to retain are places that not only lack natural resources but that are most vulnerable to climate crisis, the study notes. Indigenous people in Alaska and the Pacific north-west are being displaced by rising sea levels. But in the south-west, it is the increasing desertification of already arid areas making life for the Navajo and other nations especially hard.

“When we think about how to address climate change, we sometimes forget that past US policies and actions have led to conditions in which some groups are burdened more by climate change than others,” said Justin Farrell, a Yale professor and the study’s lead author, to National Public Radio.

Although the average temperature in the southwest has increased beyond the threshold of 1.5C, it is even hotter in northeastern Arizona where Méndez’s ranch and most of the Navajo Nation is located.

“There is a very significant upward trend in temperatures for northeastern Arizona,” said Brian Klimowski, the lead meteorologist for the northern Arizona office of the National Weather Service. “Plotting the steep rise since the mid 1960s looks like a hockey stick graph.” He also noted that precipitation for the region has decreased. “Every spring except for two has been below average since 2005.”

Crystal Tulley-Córdova monitors the impacts of long-term drought as a principal hydrologist for the Navajo Nation. She said migration patterns have changed as animals search for food and water. Natural springs and community wells have dried up. Decreasing aquifer levels have also made salinity levels rise, rendering some well water impossible to treat or drink.

The reservation’s limited developed water infrastructure is pushed to the brink, according to Tulley-Córdova, as people are forced to haul water for drinking or livestock.

The Navajo Nation is largely rural with few developed towns and a population density of six people within a square mile, compared to the US average of 345 people. Approximately one-third of Navajo homes lack piped water and few are connected to a power grid. Bringing utilities to dozens of small communities connected by spiderwebs of unmaintained dirt roads has long been cost prohibitive for the Navajo government.

And even though the Biden administration has approved millions of dollars in funding for water infrastructure on drought-stricken reservations, Tulley-Córdova says it is just a “drop in the bucket” toward the $4bn the nation’s department of water resources estimates it will take to bring “universal access to clean water” to the entire Navajo Nation.

“When the Colorado River compact was established a century ago, tribes were not signatories because we weren’t considered to be citizens of the United States,” said Tulley-Córdova. “We need to be part of that conversation now.”

But solutions on how to address the Navajo Nation’s water problem are hard to come by, not only because the state of Arizona is already using its full share of the ever-shrinking Colorado River allotment, but also because many traditional Navajo members don’t want the nation participating in the reservoir-based western water system. For these members, stopping a free flowing river is a spiritual violation that is contributing to climate crisis.

“The US government dammed us up by putting us on the reservation, just like they dammed the Colorado,” says Mulford. “What the government is doing to water they are also doing to us.”

The land where Méndez grew up is called tsezhin yah nil ah nih, which roughly translates to “where the buttes end”. It is an expansive sea of red dirt and blue sky. Tower-like buttes dot the western horizon while the San Francisco Peaks, about 80 miles (130 km) away, rise to the west. There are no fences and just a handful of houses. The people who settled in the area are from Méndez’s mother’s Áshįįh (Salt) clan.

Méndez’s mother, Jackie Riggs, says her great-great-grandmother brought sheep to the area in the 1870s after she got married. By the time Riggs’s grandmother was managing the herd, Riggs estimates there were 300 to 500 sheep. Riggs and her 11 siblings served as young shepherds.

“We moved the sheep around to wherever the water was,” said Riggs. “And when the lambs were born we would stay up all night bottle feeding them because there were so many.”

Riggs, 60, is sitting on the porch of the house her mother built and where she now lives. It is a Saturday afternoon in late September and she is taking a break from unloading hay from her pickup. After Riggs’ mother died in 2010, she took over the ranching operation with her two daughters. The homestead still lacks piped water, electricity, phone service and paved roads, but now there are far fewer sheep.

Méndez is in charge of calculating how many sheep they can care for based on how much water they can haul. She says 50 sheep drink 200 gallons a day. And the horses drink up to 200 gallons (757 liters) a day. She also knows exactly how much water she uses. Her toilet requires two gallons to flush.

According to a drought-adjusted business model, the women now sell lambs after they are born to keep the flock from growing. “We can’t haul water for 80 animals,” Méndez said.

A big part of their business cost is gas. If the livestock water station 10 miles (16 km) away is empty, they have to drive to the next closest location 40 miles (64km) away. And if the roads are too washed out to pull their water trailer, they have to make multiple trips carrying a tank that sits in the back of Riggs’ pickup.

“Somebody needs to get out there and fix the road,” said Méndez’s sister Justine Delmore, as she, Riggs and Méndez sit on the porch. She motions toward a tractor next to a barn that they use for smoothing out ruts.

While unusually heavy rains in August and September caused extra headaches for road maintenance, it has given the three women respite from having to haul hay. Summer grasses carpet the fields, providing the sheep and horses with plenty of forage. But climate models for the megadrought predict that a dry Winter and Spring is inevitably ahead.

Méndez has been unsuccessful in obtaining USDA aid for their ranching operation. She says loans require using land as collateral, which is not possible on the reservation where there is no private property. Opportunities for other financial relief packages fell thru the cracks when tribal government employees failed to file the necessary paperwork.

Navajo culture is a matrilineal society, and the three women pride themselves on being self-reliant and carrying on the tradition of their grandmothers. But their uphill climb keeps getting steeper.

Eventually, they leave the cool shade of the porch and go to the horse corral to unload hay. Méndez notices that one of the 500-gallon (1,892 litres) water tanks is running low.

A hawk flies overhead. Two dogs lie in the shade of the barn. Riggs climbs on to a fence with binoculars to try to find where the sheep, descendants of her great-great-grandmother’s flock, are spending the afternoon.

“It is hard to get my head around the idea of not having these animals,” said Méndez, wondering how much longer they will be able to keep the ranch going. “But climate change is also a hard thing to get your head around. And people aren’t making the necessary changes to deal with it.” 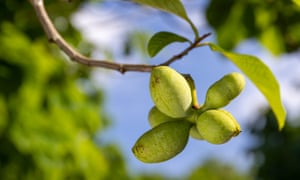 How America’s most enigmatic fruit is making a comeback