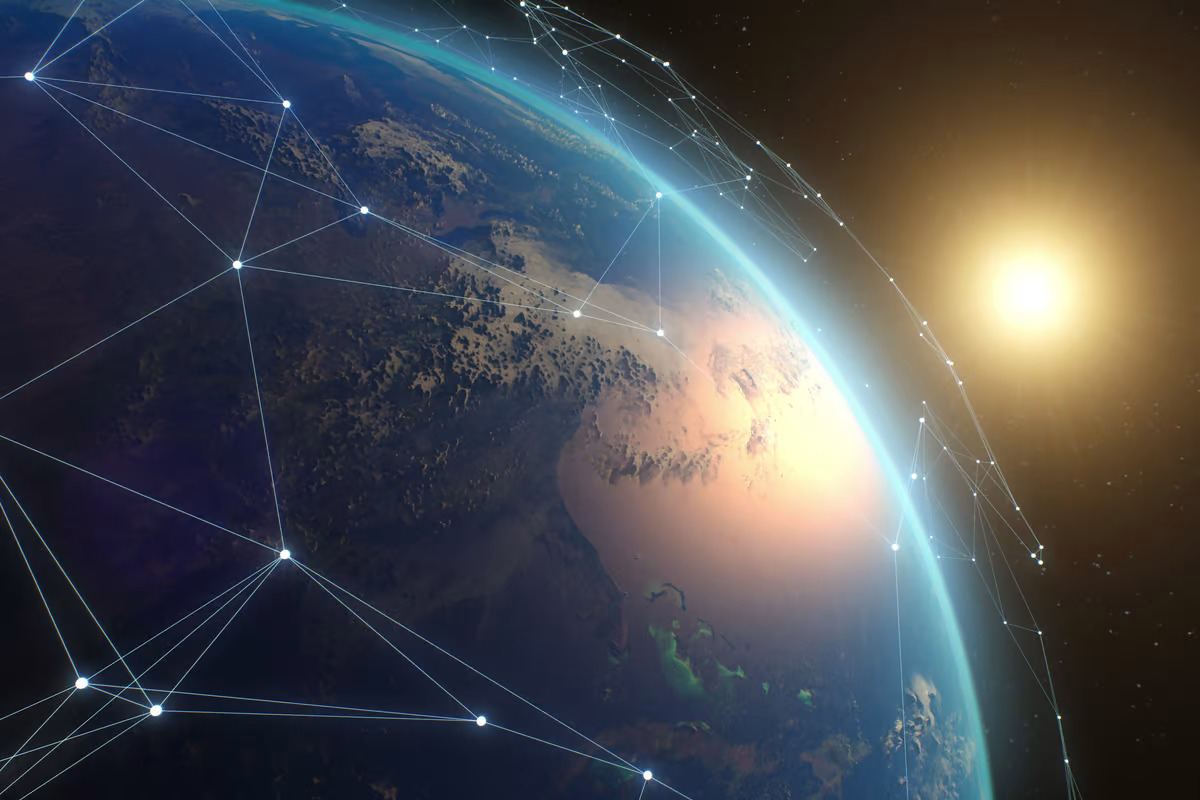 Emrod has just demonstrated its wireless power beaming technology to Airbus and the European Space Agency (ESA) as part of the ESA’s new push toward 24-hours-a-day space-based solar power. The idea of space-based solar is not new. The problem has always been size; you’d need transmitters and receivers about 2 km (1.2 miles) in diameter to shift a couple of gigawatts of energy down to Earth from a geostationary orbit some 36,000 km (22,370 miles) away. Building an array that size on Earth would be a huge challenge. Building one in space? Yikes.

Emrod says its near-field energy beams could get the job done much more efficiently than competing technologies. But Emrod founder Greg Kushnir also thinks there’s a much cheaper and easier way to satisfy European – and indeed global – renewable energy needs: by setting up a global wireless energy matrix capable of beaming power instantaneously around the planet, using lower-orbiting satellites that could be significantly smaller. You’d get 24-hour renewable energy, anywhere, out of low-cost solar assets right here on Earth.

We wrote back in 2016 about GEIDCO’s proposal for a global, interconnected renewable energy grid running through tens of thousands of miles of ultra high-voltage power lines. Emrod’s World Energy Matrix concept would need far less ground- and ocean-floor-based infrastructure, eliminating a ton of planning and execution headaches – or at least replacing those headaches with new orbital ones. But if you built a giant solar array in the Sahara desert in Libya, then just as the midday sun is beating down and creating maximum power, you could send that energy right across to power Shanghai as the sun begins to set.

“Essentially,” says Kushnir, “we’ve been talking about decoupling where energy is generated from where it’s consumed for a few years now. It would be the same order of magnitude of revolution as what wireless communication has done for our economy. You once had to move value from one side of the world to the other in the form of gold, in a sack on a ship. Now you can move financial value at the speed of light through wireless communication using satellites. But why just harvest the information out of those electromagnetic waves? Why not harvest the actual energy from these waves? Or both?”

The company has scaled up the small, lab-based designs we wrote about in 2020. The current square transmitting and receiving antenna prototypes are 1.92 m (6.3 ft) in diameter. In the ESA demonstration, this gear sent some clean energy from one side of an Airbus warehouse to the other – a gap of just 36 m (118 ft) – to power a model city, a hydrogen electrolyzer and a beer fridge for Oktoberfest.

But with the backing of NZ energy company Powerco it’s already proven capable of doing the same over at least 200 m (656 ft) outdoors, and the company says it’s ready for commercial deployment over much longer distances – basically, all that’s needed is a direct, clear line of sight between the antennas or relays.

A global wireless energy grid was of course proposed by Nikola Tesla around a century ago. The idea was famously shot down by banker J. P. Morgan, who asked, “if anyone can draw on the power, where do we put the meter?” Such a capitalist would have no such issue with Emrod’s point-to-point technology, which needs to be precisely aimed at large, meter-friendly receiver arrays.

“The technology is here,” says Kushnir. “It’s been developed, it’s starting to be deployed. And when Airbus wanted to demonstrate it as part of a space-based energy infrastructure, there was no other company in the world that could do it. In the last few months, it seems the industry has been catching up with our vision and starting to throw budgets and teams at this. But we have a head start, we started this three years ahead of everybody else.”

“It’s been floating around for decades,” he continued. “The thing is, all the other teams that looked at power beaming treated it like communications – as a far-field system. And with far-field systems, you get side lobes – you’re immediately giving up 15-20% of the power, which goes sideways. And the beam starts diverging, so you end up with a huge footprint and a gigantic antenna wherever you’re trying to collect the energy. so the cost/benefits of these studies have always looked unrealistic.

“We’re not working with a far-field system. We’ve gone back to first principles and looked at it very differently, using a near-field system. Near and far field, by the way, isn’t so much about distance, as about where you’re focusing the beam and at what stages you’re capturing it. We create a collimated beam with a phased array. It moves pretty much like it’s in a virtual wire. Very well defined, no side lobes. And we capture it in the near field, or the Fresnel zones, to be more accurate. In this demo a few days ago, we demonstrated a beam collection efficiency over 95%. We know how to bring it around 99%, so it’s already much more efficient than the theoretical limit you could get from a far-field system. Plus, we can make our antennas much smaller. We can benefit from focusing.”

The tech is ready to scale up to handle orbital distances at high efficiencies, and Kushnir says that with a leap in the efficiency of amplification, it’ll be as efficient – or more efficient – to move energy via satellite than via city power grids. “If you’re talking about what we could float up there in the next five years, it’s probably an end-to-end efficiency around 60-70%. If we’re talking about the European Space Agency’s space solar timescales for 2040-2050, we can get much higher, probably to the same efficiencies of most of the grids around the world. Maybe not European or American grids, but well above most of the grids in the world. The benchmark, I think, would be around 80-85%.”

Of course, in order to get a World Energy Matrix up and running, you’re going to need a series of structures in space. These satellite antenna arrays would act more or less like lenses, taking an energy beam coming up from the ground, bending and refocusing it to send it on to another point, either straight back down to the ground or via another satellite. While these can be smaller than previously possible, they still won’t be small. The size will depend on the distance, the distance will affect how many satellites you’ll need in your constellation, and these will be just a few of the elements in a complex feasibility and cost-benefit equation.

As an idea of the size, if an antenna was placed in an orbit around 400-500 km (250-310 miles) up, it’d need to be about the same size as the 108-m (357-ft) structure of the International Space Station, which orbits at about the same height. It’ll be far less complex and expensive than that hundred-billion-dollar beast, but it’d still require a fair bit of space-based assembly, which will add to the challenge.

Emrod is looking at another proposal that would place satellites in much lower orbits closer to 100 km (62 miles) – those would only need to be 30-40 m (100-130 ft) across, and thus much cheaper to build and launch. But they wouldn’t transmit as far across the globe, and they’d be traveling so fast and so close to the Earth that there’d be considerable air friction to contend with.

Kushnir says the company is talking to a number of aerospace companies, hoping to have its first test rigs in orbit within three years: “That’ll be the first small step. Anything to do with space takes years and years. But then I think we can move much faster than the European Space Agency’s roadmap. It’s not going to take 20 years. Having said that, we’re not waiting for that to happen. This is a commercial endeavor; the first applications are terrestrial. We’re hoping to have the first commercial deployment in 2024.”

The biggest issues for Emrod at this stage, says Kushnir, aren’t the technology at all, or even the economics.

“For some reason,” he says, “there’s a cognitive gap for people. They have no problem believing they can pick up a phone – which uses electromagnetic waves sent via satellite – to communicate with people all over the world and send information. But it’s hard for people to accept you can do the same with energy, and that in terms of the physics, it’s not that different.

“So we have a lot to prove. I guess, in about two years, we’ll cross that Rubicon after we have the first couple of systems deployed out there commercially. Then we’ll start seeing them deployed more widely. The first set of applications will be where there are bottlenecks: issues with rights of passage or permitting, or undersea cables.”

From there, things could get really interesting; Kushnir says the company is at the early stages of developing a “power skin” that could turn the entire fuselage of an aircraft into a wide-angle antenna array capable of receiving power during flight, either from space-based or land-based transmitters. Such a thing could completely sidestep the energy storage issues that are putting the brakes on airline decarbonization, if Emrod could prove to aviation authorities that it was safe.

The other key issue Kushnir sees coming down the pipeline is global politics. “Well, it’s next-level energy infrastructure,” he says. “It’s gonna be highly politicized, just like GPS, or quantum computing, or any other breakthrough technology. But once you can send energy instantaneously, regardless of location, it doesn’t really matter if you border a country or if it’s on the other side of the world.” If you have a friendly country in the right time zone, where renewable energy is being generated right when you need it, your energy supply is as secure as that relationship.

If Emrod’s wireless power tech never makes it into space, and the best it manages is to replace some high-voltage power lines, it’ll still be a huge step forward. But considering the incredible money that’s being spent on projects like the US$22-billion Australia-Asia Power Link, which will send renewable energy from solar farms in the Australian desert all the way to Singapore via the world’s longest undersea cable, the astronomical costs of wireless power satellites could start to make sense.

A global wireless power grid that can efficiently link any two points on Earth – with much smaller terrestrial infrastructure, and without cutting great strips out of forests – would indeed be a game-changing leap forward in the global transition to clean energy. Cities would need far less energy storage to firm up their power grids – a huge advantage giving the coming lithium squeeze – and colossal solar farms could make productive use of some of the most remote and barren deserts on Earth. It’s a heck of an ambition, and we look forward to following Emrod’s progress.

Check out a video below.

Little old NZ punching above its weight again. They already have satellite launches almost monthly by now reuseable Rocket Lab rockets at Mahia and always seem to produce great technical innovation. The master of the atom, Rutherford, was a standout.
–