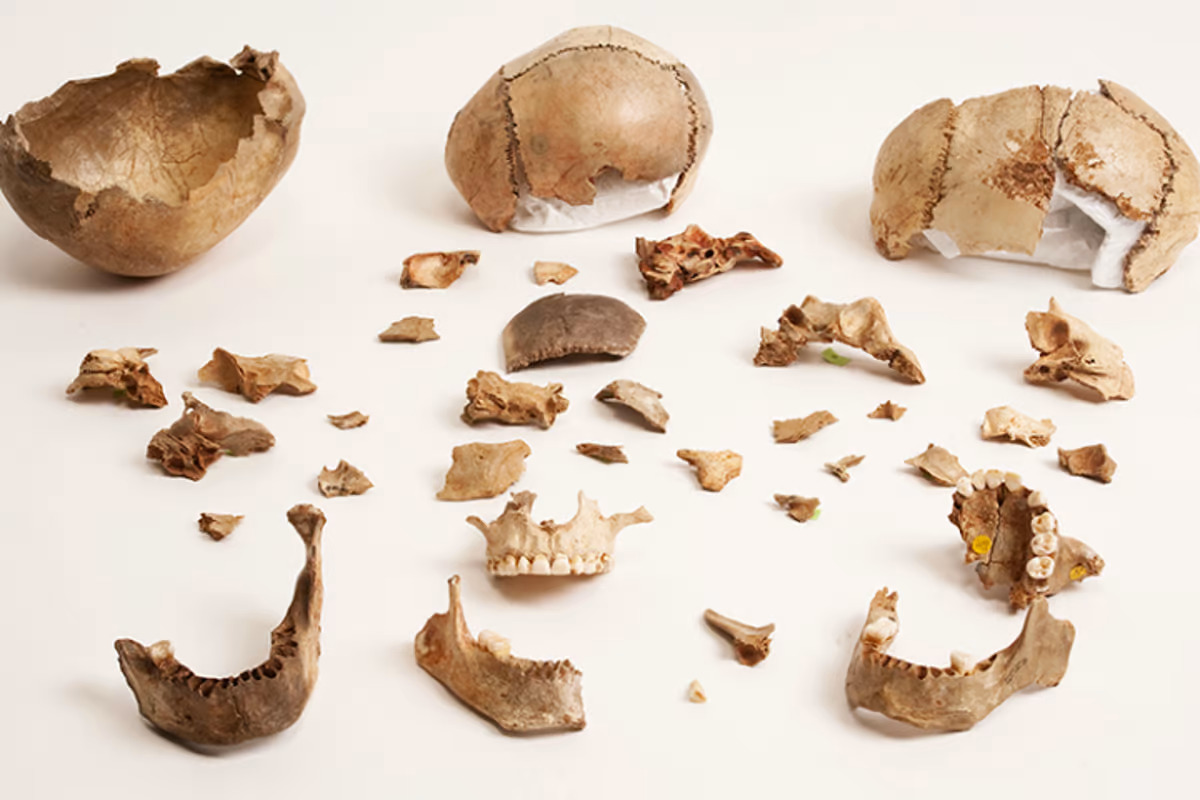 Samples of the ancient bones from which the oldest human genomes in Britain were taken.  University College London
–
By Michael Irving

One of the skeletons was found in Gough’s Cave in Somerset, while the other was a person who lived in Kendrick’s Cave in North Wales. They were both thought to date back to the end of the Paleolithic period, between 10,000 and 20,000 years ago. By that point, all other species of humans had died out, and modern humans were spreading across the globe.

There’s evidence they’d been in Britain as early as 44,000 years ago, but there’s a large gap in the record that suggests humans were driven out during the last ice age, before returning tens of thousands of years later. To investigate further, researchers from the London Natural History Museum, University College London and the Francis Crick Institute sequenced the genomes of the bones and conducted radiocarbon dating.

They found that the individual from Gough’s Cave was a woman who died around 15,000 years ago. Her ancestry was traced to an initial migration into northwest Europe about 1,000 years earlier. Interestingly, the second individual bore no relation to the first – he was a male who lived about 13,500 years ago, as part of a hunter-gatherer group. His ancestors seemed to have come from the near East and migrated to Britain about 14,000 years ago.

“Finding the two ancestries so close in time in Britain, only a millennium or so apart, is adding to the emerging picture of Palaeolithic Europe, which is one of a changing and dynamic population,” said Dr. Mateja Hajdinjak, co-author of the study.

The team found evidence that the two groups weren’t just genetically distinct, but had very different cultural practices as well. Kendrick’s Cave appeared to have been used as a burial site, with small art items like decorated horse jawbones found. The older group from Gough’s Cave, however, showed signs of ritualistic cannibalism, including human skulls modified into drinking cups. Their diets were different in other ways too.

“Chemical analyses of the bones showed that the individuals from Kendrick’s Cave ate a lot of marine and freshwater foods, including large marine mammals,” said Dr. Rhiannon Stevens, co-author of the study. “Humans at Gough’s Cave, however, showed no evidence of eating marine and freshwater foods, and primarily ate terrestrial herbivores such as red deer, bovids (such as wild cattle called aurochs) and horses.”

These skeletons predate another famous specimen, Cheddar Man, who was also found at Gough’s Cave and lived around 10,000 years ago. Intriguingly, his genome was found to share only 15% of the ancestry from the older woman in the same cave – the other 85% came from the hunter-gatherer group in Kendrick’s Cave.

The new finds add to the growing understanding of early human migration through Europe and the world.

The research was published in the journal Nature Ecology and Evolution.

Michael Irving
Michael has always been fascinated by space, technology, dinosaurs, and the weirder mysteries of the universe. With a Bachelor of Arts in Professional Writing and several years experience under his belt, he joined New Atlas as a staff writer in 2016.
–
–
1 comment
Sign in to post a comment.
Please keep comments to less than 150 words. No abusive material or spam will be published.
CarolynFarstrider – 2022 Oct 25 – 06:21 AM

Fascinating research. Let’s hope more detail can be determined from other remains.
–