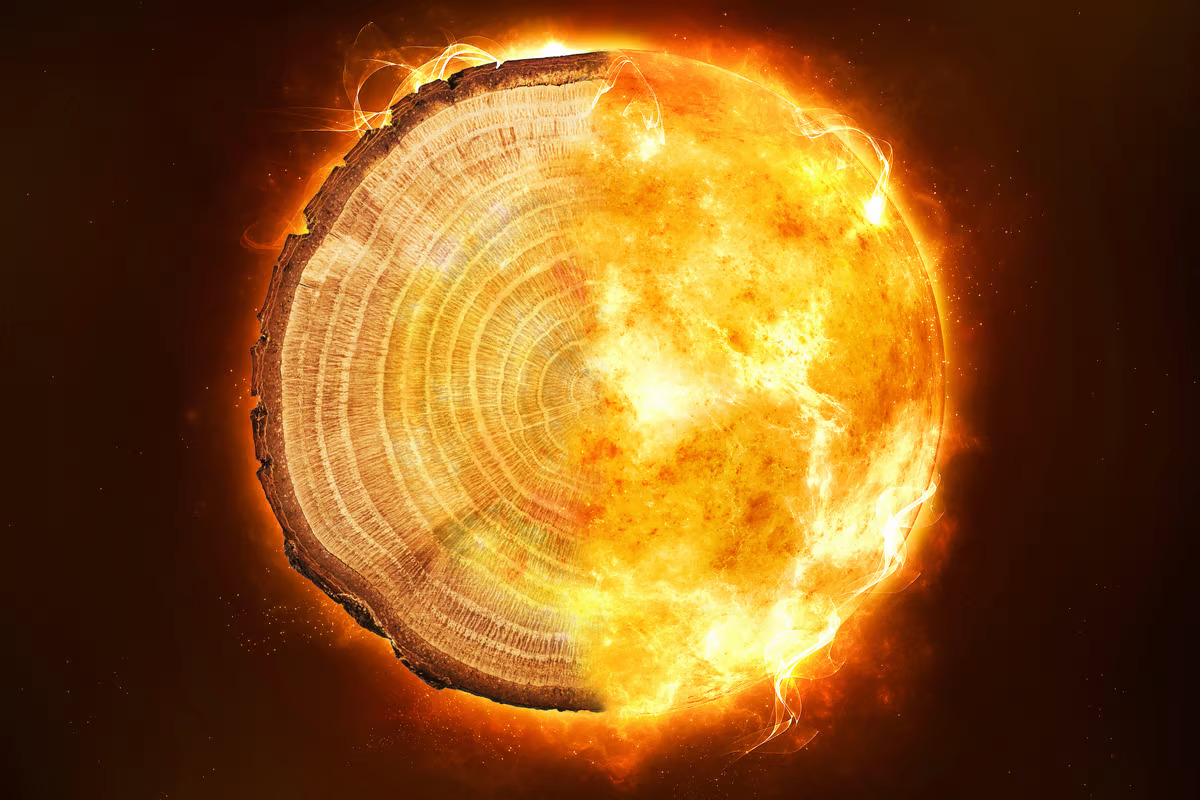 Tree rings can preserve a record of astrophysical events like solar flares.  University of Queensland
–
By Michael Irving

In 1859, less than a day after huge solar flares were spotted by astronomers, Earth was struck by the most intense geomagnetic storm on record. Strong aurora were visible almost all the way to the equator, telegraph systems shorted out and fires were even sparked in telegraph stations. This became known as the Carrington Event.

But it wasn’t the first, it won’t be the last, and it may not even be the strongest. Natural records preserved in tree rings show that an event about 10 times stronger struck around the year 774 CE, which would push the limits of what the Sun is capable of producing. In fact, over the last 10,000 years or so, there are six known major radiation spikes, dubbed Miyake events.

If something like this was to hit today, the results would be catastrophic for our extensive power grids and communications networks, with predictions that it would take years to recover. So to gain a better understanding of them, researchers at the University of Queensland investigated the historical record of Miyake events to find out how strong they were and when they occurred in relation to the regular cycles of the Sun.

To do so, the team developed a system to analyze huge amounts of existing data on tree rings from around the world, and model the global carbon cycle over the last 10,000 years. In particular, they were looking for carbon-14, a radioactive isotope that’s produced when cosmic radiation strikes the Earth’s atmosphere. This is then taken up by trees as they grow, preserving the record within their rings. Sudden, sharp spikes of carbon-14 can indicate large radiation storms from space.

In doing so, the scientists realized something strange, and a little disturbing. Miyake events are generally thought to be large solar flares, so they expected to find them clustered around the solar maximum – the most active phase in the Sun’s 11-year cycle. But this wasn’t the case, and in some events the effects seemed to last longer than would be expected with flares. An event in 663 BCE, for example, seemed to last three years, while one in 5480 BCE increased over an entire decade.

“We’ve shown they’re not correlated with sunspot activity, and some actually last one or two years,” said Qingyuan Zhang, first author of the study. “Rather than a single instantaneous explosion or flare, what we may be looking at is a kind of astrophysical ‘storm’ or outburst.”

Other possibilities include supernovae, gamma ray bursts and magnetar outbursts, but the team says there’s no evidence of these in the sky today. For reference, a supernova recorded in 1054 is still visible now as the Crab Nebula.

With the origins of these events still unknown, the team says that further work is crucial to better understand them – including when they might strike in future and how we could prepare.

“Based on available data, there’s roughly a one per cent chance of seeing another one within the next decade,” said Dr Benjamin Pope, lead author of the study. “But we don’t know how to predict it or what harms it may cause. These odds are quite alarming, and lay the foundation for further research.”

The study was published in the journal Proceedings of the Royal Society A.

Source: University of Queensland via ABC
–
–

Michael Irving
Michael has always been fascinated by space, technology, dinosaurs, and the weirder mysteries of the universe. With a Bachelor of Arts in Professional Writing and several years experience under his belt, he joined New Atlas as a staff writer in 2016.
–
–
7 comments
Sign in to post a comment.
Please keep comments to less than 150 words. No abusive material or spam will be published.
José Gros-Aymerich – 2022 Oct 28 – 02:48 AM
It would be interesting knowing if, around the Year Zero AD, any of these high radiation events took place; an increase in atmospheric C14 may provide wrong readings, attributing a younger age, in C14 date tests, as those done on the Torino Sindone.
If the arrival of EM Pulses to Earth can be predicted with some advance, those coming from the Sun will start in a Flare: could a disconnection of all electric power from grids protect it? Gesund +
michael_dowling – 2022 Oct 28 – 07:42 AM
José Gros-Aymerich: There are satellites that monitor the sun for coronal mass ejections that are predicted to hit the earth,giving a few hours warning of approaching trouble,so critical systems can be shut down. https://interferencetechnology.com/nasa-developing-early-warning-system-for-solar-flares/
clay – 2022 Oct 28 – 10:50 AM
Radial correlation (presuming the tree was upright) would be a handy bit of info. I am guessing that level of granularity is not doable. Though maybe an analysis of the saturation from treetop to base/root/ground level, correlated with earth rotation could narrow the origination point in the sky.. again, probably a BIG ask.
Alcyone – 2022 Oct 28 – 11:33 AM
Yes, very mysterious. Recent peer reviewed journal articles are acknowledging that our sun is entering a repeating micronova stage. It’s interesting to see these vague, barely-factual articles appear days after a Grand Canyon sized trench was carved down to the earth’s ionosphere by a CME. Shutting off the power grid will not prevent metal wires, power lines from catching fire, as they did in the Carrington Event. Except now, we have mini power stations every 35 meters in every city, which will explode, and electrical wiring in the walls of every inhabited building, which will be on fire.
What you need to write an article about is this: which nations besides Switzerland have invested in Faraday cages around the power stations to prevent every town from not just losing power but exploding and burning people alive? Have you really thought this through?
Alcyone – 2022 Oct – 11:40 AM
Incidentally, their 10k-year study doesn’t go back nearly far enough. This is a roughly 12k year cycle.
Did you notice that Uranus and Saturn are tilted at least 30° off their historical axes? Pluto’s atmosphere is blown away? Volcanoes on Mars? Oh wait, yes, you have an article about how mysterious that is too. What about the whales beaching themselves in Tasmania? Have you noticed Earth’s pole migrating into Siberia >30 miles in 2020 alone? What about any of the other observed stellar events, like Betelgeuse going micronova in 2020? We didn’t know if it was still there for months because of the debris between our telescopes and there.
Have you ever heard of a galactic sheet wave?
Welcome to the present moment.
vince – 2022 Oct 29 – 02:20 PM
As tall as tall,
As wide as wide,
A thing of beauty,
A shade of delight.

A tree most seasons,
A wonderful sight.

They also tell great tales, tattle tales they are and truth is all they know. The Ent know this as a fact.

It’s not quite so straightforward. Reading their study, the authors indicate that the event in 774 exhibits an increase in C14 that is found in tree rings globally but manifests as a sharp spike in some places and a gradual increase in others which is “inexplicable” in their words. They suggest several possible explanations, among them differences in local environmental factors, physiological differences in uptake of C14 between tree species, and differences in data quality from the labs around the world that have measured radioisotopes in tree rings. Until this is understood, it’s premature to draw conclusions about the frequency or magnitude of solar storms in the past, but being prepared for a Carrington-level event is certainly focusing the attention of power grid operators and the department of defense in the U.S.
–