Scientists suggest octopuses propel material as part of den cleaning, but also in interactions and with purpose. 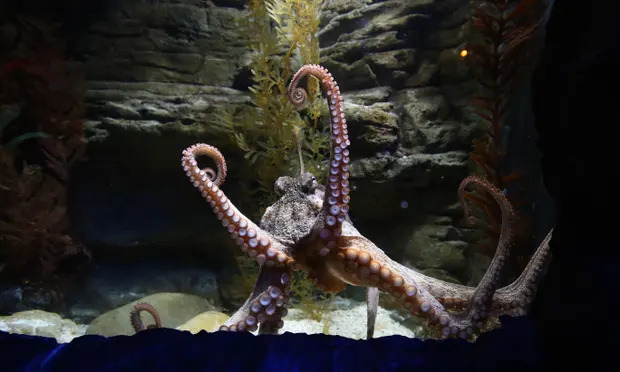 The octopuses may hit each other with projectiles as an assertion of personal space, it has been suggested. Photograph: Robert Cianflone/Getty Images

Nicola Davis Science correspondent  @NicolaKSDavis
Last modified on 2022 Nov 09
–
They hunt alone, are prone to a scrap, and even cannibalize one another. And octopuses appear to have another antisocial arm to their behavior: they hurl jet-propelled clouds of silt, algae and even shells.
–

Researchers studying Octopus tetricus, the common Sydney octopus, have filmed the cephalopods gathering debris in their front arms and web and jet-propelling it away from their body using water ejected from their siphon – the latter having been shifted between their rear arms for the purpose.

While the team say these “throws” appear to be used by octopuses for den cleaning, or chucking away shells after eating, they have also recorded the creatures hitting other octopuses with material in what appear to be deliberate strikes.

Prof Peter Godfrey-Smith, first author of the research at the University of Sydney, said the behavior is surprising,

“The throwing – or propelling, or projecting – of objects that have been gathered and held is rare in the animal kingdom. To propel an object, even for a short distance, under water is especially unusual, and also quite hard to do,” he said.

Writing in the journal Plos One, Godfrey-Smith and colleagues report how in 2015 they recorded more than 21 hours of video in Jervis Bay off the south coast of New South Wales, Australia using underwater stationary cameras, capturing the behavior of about 10 octopuses.

Both males and females were recorded carrying out “throws”. However, the team report that the majority were by females, with two of them accounting for 66% of the hurls.

Out of 102 throws, the team report 32% were related to octopuses cleaning out their dens, while 8% occurred after eating, with shells making up the majority of material chucked by the creatures in these contexts.

However, 53% of the recorded throws occurred within two minutes of one octopus interacting with another, whether fighting, mating or grappling.

These interactions also occurred in addition to another action, such as den cleaning, and tended to involve silt as the main material. What’s more, the researchers note 33% (17) of these throws involved the material hitting another octopus.

It seems such strikes might be deliberate. Among evidence for this, the team found that octopuses using an unusual combination of legs to hold the material, those throwing with high vigor, and those that were darker in color at the moment of throw were all more likely to hit another octopus.

“Earlier work at this site has found that darker colors are associated with more aggressive behaviors,” the team write.

While such strikes were generally jet-propelled, in one unusual case the team report that “a shell was, at least in part, flung by straightening an arm, and hit another octopus”.

The team add that the recordings from 2015, as well as other footage, show instances of the cephalopods making multiple throws within a time period, often hitting other octopuses in the process. On some occasions, those in the line of fire appeared to raise one of their arms before the strike in preparedness – or duck, either during or just before the throw.

The team say it remains unclear why the octopuses would target others, adding that the footage did not show such behavior starting a fight, or resulting in “return fire”, while in some cases, throws were made into empty space. Indeed, they write, it is possible that octopuses hit each other simply as a result of interacting while in the process of other actions like den cleaning.

But Godfrey-Smith suggested the strikes could have a purpose. “I think quite a lot of it is a bit like an assertion of ‘personal space’,” he said. “In quite a few cases, females have thrown material at male octopuses who have been attempting to mate with them … But in other cases, females throw and hit other females.”