An expedition to find Wallace’s giant bee in the wild led to its ‘rediscovery’ in Indonesia’s Maluku islands. 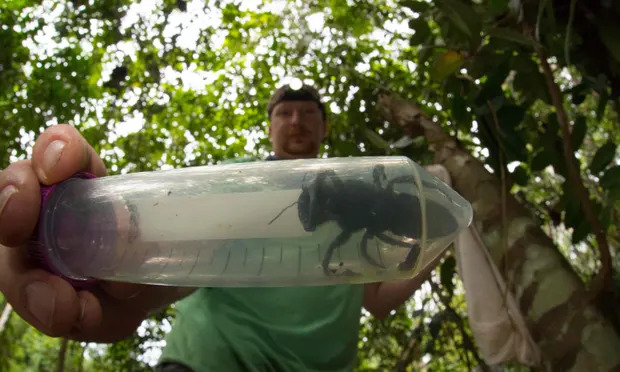 Entomologist Eli Wyman with the first rediscovered individual of Wallace’s giant bee. It was the first time the bee had been seen alive in the wild for nearly 40 years. Photograph: Clay Bolt/AFP/Getty Images

–
The age of extinction is supported by

A “flying bulldog” is how conservation photographer Clay Bolt described it, while local people call it raja ofu, or the king of bees. Wallace’s giant bee (Megachile pluto) is certainly a bee-hemoth. The world’s largest species of bee, it can grow to four times the size of a honeybee, with a wingspan of 64mm (2.5in). Such a giant should be hard to lose, but the incredibly rare bee, native to a cluster of Indonesian islands, was feared extinct for nearly 40 years, until Bolt and his colleagues “rediscovered” it in 2019.

The naturalist Alfred Russel Wallace, a contemporary of Charles Darwin, collected the first known sample of the bee in 1858 while exploring Bacan, one of northern Indonesia’s Maluku (Moluccas) islands. Wallace collected a single female of the species, and noted it as “a large, black wasp-like insect, with immense jaws like a stag-beetle”.

More than a century passed before the bee was seen alive again, in 1981, when American entomologist Adam Messer observed them on a few islands, not far from where Wallace first discovered them. But then, nothing. “It was thought it was probably extinct because it hadn’t been seen, despite many searches, and because many parts of Indonesia are being cleared for mining and palm oil plantations,” says Bolt.

What is the Lost and found series?

Scientists estimate that there are more than eight million different forms of life on Earth – but one million of those are thought to be threatened with extinction and many more have died out over the course of history.

Some plants and animals are lost and never seen again. But some reappear years later, often thanks to the efforts of scientists and conservationists working in the field.

This series celebrates those rare moments of hope when life clings on against the odds – and highlights the crucial work being done to preserve the planet’s extraordinary biodiversity.

The idea of finding Wallace’s giant bee was given fresh hope when researchers found a specimen in a Dutch museum that had been collected in 1991, and two more dead specimens went up for sale on eBay. The news was good and bad: good, in that it was evidence that the bees might still exist, but bad as there were signs of a worrying trade in rare specimens. A female giant bee, collected on Bacan, sold to a private collector for about $9,100 (£8,100). Several months later, a second specimen sold for $4,150 (£3,700).

It was the impetus Bolt needed to start an expedition. “Eli Wyman, an entomologist from Princeton University, and I arrived in North Maluku in January 2019. I felt certain that local people would be very aware of the insect, considering its size, but no one seemed to have seen it. They showed us pictures of large beetles and other insects thinking they were what we were searching for.”

The small team searched locations based on local information and accounts of previous discoverers. “It didn’t seem we’d get a result, but on the way home one day, I saw a nest by chance and studied it with my binoculars,” recalls one of the team, local guide Iswan Majuud. “I climbed the tree, and used the torch on my phone to see what was in the hole. I saw something move and jumped down, afraid it was a snake. After catching my breath, I climbed again, and told the team the hole looked wet and sticky. I also saw a black and white creature move inside. They concluded this was a giant bee.”

Bolt was able to photograph Wallace’s giant bee alive in the wild for the first time. “The living insect was much more impressive than the preserved specimen,” says Bolt. “It seemed bigger and much less frightening and gentler than many would have predicted. The bee does sting but, according to the only report I could find, it doesn’t hurt ‘too much’.”

The team was buzzing. “The opportunity to be one of the few people who have observed a rare, unique and charismatic animal in its native habitat is a special privilege,” says Wyman. “Finding Megachile pluto also confirms officially that this truly singular and threatened species still holds on to its tenuous niche, and gives us the opportunity to make sure the world knows it exists and that it’s worth protecting.”

Since the rediscovery, more nests have been found, including in protected areas, which may help to secure the insects’ future. “In my fantasy, the bees would become as much a symbol of the amazing wildlife of this region as traditionally more charismatic animals, such as Wallace’s standardwing bird of paradise,” says Wyman.

“My hope is that by sharing the stories of these rare bees and other animals, we can inspire people to care about these threatened creatures and to be aware that their existence into the future is very much in our hands.”

Find more age of extinction coverage here, and follow biodiversity reporters Phoebe Weston and Patrick Greenfield on Twitter for all the latest news and features
–