Advocates of plant-based protein say 75% of world’s farmland should be rewilded to reduce emissions. 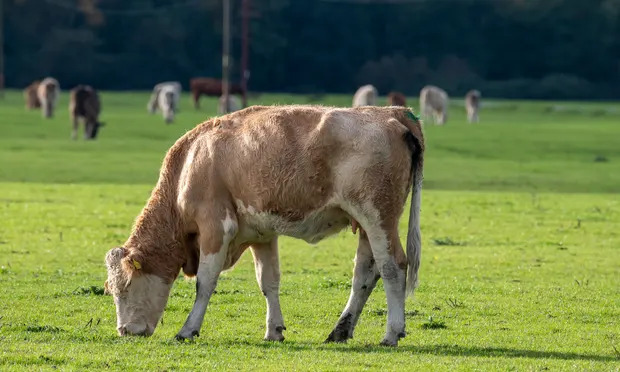 About 85% of agricultural land in England is used for pasture for grazing animals or to grow food. Photograph: Maureen McLean/Rex/Shutterstock

Cop27 live – latest news updates
–
Helena Horton Environment reporter
Last modified on 2022 Nov 12
–
Enough protein to feed the entire world could be produced on an area of land smaller than London if we replace animal farming with factories producing micro-organisms, a campaign has said.

The Reboot Food manifesto argues that three-quarters of the world’s farmland should be rewilded instead.

Emissions from livestock farming account for at least 16.5% of the planet’s greenhouse gases, according to a study. A number of experts have been calling for a reduction in animal protein in our diets.

Henry Dimbleby, the UK government’s food tsar, has suggested people eat 30% less animal protein, and replace meat and dairy with plant-based protein. About 85% of agricultural land in England is used for pasture for grazing animals such as cows or to grow food that is then fed to livestock.

Vegan activists are protesting at the Cop27 climate conference in Sharm el-Sheikh, Egypt, arguing that animal agriculture is a big contributor of greenhouse gas emissions.

The campaign, being launched at Cop27, asks for 10 policies world governments should adopt, including investing 2.5% of GDP over 10 years into food innovation, ending all subsidies for animal agriculture and subsidizing plant-based foods instead, banning the advertising of carbon-intensive meat, limiting patents on new food technology and legalizing gene-editing.

The cornerstone idea is swapping animal agriculture, where possible, for a technology called precision fermentation, which would involve brewing yeasts and bacteria to make protein. It could create biologically identical animal proteins using genetically engineered micro-organisms fermented in tanks. These factories would be powered by solar, wind and nuclear. Campaigners point out that the technology produces 99% of insulin and 80% of rennet worldwide.

Sign up to Down to Earth – Free weekly newsletter

The planet’s most important stories. Get all the week’s environment news – the good, the bad and the essential

How can we cut soaring demand for meat? Try a hybrid burger…
Joseph Poore
Read more

They say protein from precision fermentation is up to 40,900 times more land efficient than beef, making it technically feasible to produce the world’s protein on an area of land smaller than Greater London.

Some forms of precision fermentation are being deployed already in the US, including a process that can make the milk proteins responsible for the fatty, tangy taste in ice-cream usually achieved by dairy.

The Guardian columnist George Monbiot, who wrote about this potential solution in his recent book Regenesis, is supporting the campaign.

He said: “The elephant in the room at Cop27 is the cow. But thankfully this time, there really is a recipe for success. By rebooting our food systems with precision fermentation we can phase out animal agriculture while greatly increasing the amount of protein available for human consumption.”
–

More on this story