The Vascones, an iron age tribe from whose language modern Basque is thought to descend, previously viewed as largely illiterate. 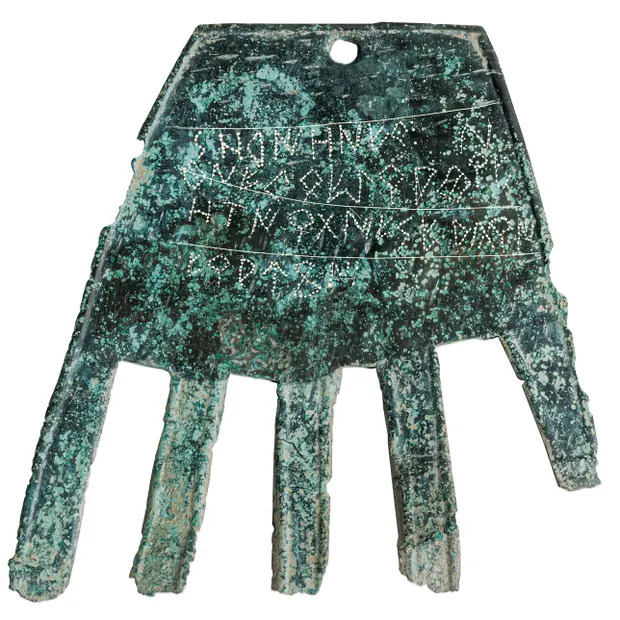 The Hand of Irulegi was discovered last year near Pamplona. Photograph: Navarra government/AFP/Getty

Last modified on 2022 Nov 16
–
More than 2,000 years after it was probably hung from the door of a mud-brick house in northern Spain to bring luck, a flat, lifesize bronze hand engraved with dozens of strange symbols could help scholars trace the development of one of the world’s most mysterious languages.

Although the piece – known as the Hand of Irulegi – was discovered last year by archaeologists from the Aranzadi Science Society who have been digging near the city of Pamplona since 2017, its importance has only recently become clear.

Experts studying the hand and its inscriptions now believe it to be both the oldest written example of Proto-Basque and a find that “upends” much of what was previously known about the Vascones, a late iron age tribe who inhabited parts of northern Spain before the arrival of the Romans, and whose language is thought to have been an ancestor of modern-day Basque, or euskera.

Until now, scholars had supposed the Vascones had no proper written language – save for words found on coins – and only began writing after the Romans introduced the Latin alphabet. But the five words written in 40 characters identified as Vasconic, suggest otherwise.

The first – and only word – to be identified so far is sorioneku, a forerunner of the modern Basque word zorioneko, meaning good luck or good omen.

Javier Velaza, a professor of Latin philology at the University of Barcelona and one of the experts who deciphered the hand, said the discovery had finally confirmed the existence of a written Vasconic language.

“People spoke the language of the Vascones in the area where the inscriptions were found,” he said.

“We had imagined that to be the case but until now, we had hardly any texts to bear that out. Now we do – and we also know that the Vascones used writing to set down their language … This inscription is incontrovertible; the first word of the text is patently a word that’s found in modern Basque.”

Velaza’s colleague Joaquín Gorrochategui, a professor of Indo-European linguistics at the University of the Basque country, said the hand’s secrets would change the way scholars looked at the Vascones.

“This piece upends how we’d thought about the Vascones and writing until now,” he said. “We were almost convinced that the ancient Vascones were illiterate and didn’t use writing except when it came to minting coins.”

According to Mattin Aiestaran, the director of the Irulegi dig, the site owes its survival to the fact that the original village was burned and then abandoned during the Sertorian war between two rival Roman factions in the first century BC. The objects they left behind were buried in the ruins of their mud-brick houses.

“That’s a bit of luck for archeologists and it means we have a snapshot of the moment of the attack,” said Aiestaran. “That means we’ve been able to recover a lot of day-to-day material from people’s everyday lives. It’s an exceptional situation and one that has allowed us to find an exceptional piece.”

Despite the excitement surrounding the deciphering of the inscription, Velaza counselled calm study rather than giddy conjecture. After all, he added, the hand hails from one particular moment in time and tells us only that the people in the area then spoke and wrote the Vasconic language.
–
–
Sign up to This is Europe – Free weekly newsletter
–
The most pivotal stories and debates for Europeans – from identity to economics to the environment
–

“That doesn’t mean we know how long they’d been there, nor what their future was after that moment,” he said.

“It’s true that this is an extraordinarily important text but I’d urge a bit of caution about using it to extrapolate too many conclusions about what happened afterwards. But linguistically speaking, it’s going to provide linguists who specialise in the Vasconic language and Proto-Basque with something they haven’t had until now.”

He added: “I think we should be excited – but we should still be very rigorous scientifically speaking.”

Not every recent Basque language discovery has lived up to its billing. Two years ago, a Spanish archaeologist was found guilty of faking finds that included pieces of third-century pottery engraved with one of the first depictions of the crucified Christ, Egyptian hieroglyphics, and Basque words that predated the earliest known written examples of the language by 600 years.

Although the archaeologist, Eliseo Gil, claimed the pieces would “rewrite the history books”, an expert committee examined them and found traces of modern glue as well as references to the 17th-century French philosopher René Descartes.
–

More on this type of story