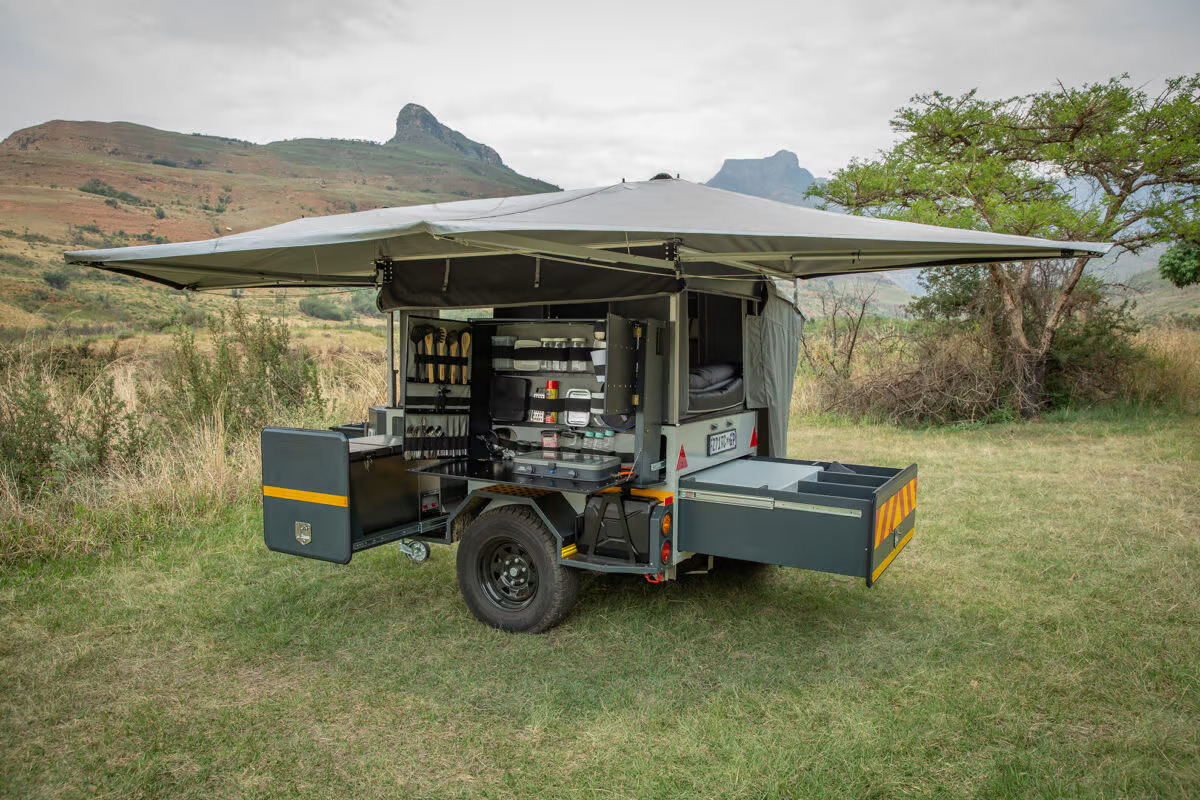 We suppose any camping trailer with a decent-size outdoor kitchen could be thought of as sleep-in chuckwagon, but the BunduTrail exemplifies the term. This is especially true when looking at it from the lefthand driver’s side, where a tall kitchen takes up the entire wall, joined around the corners by a front sink and a large rear supply drawer. From this vantage point, the BunduTrail looks entirely like a trailer dedicated to carrying food, cooking gear and tools, dining furniture, and other supplies related directly to storing, prepping, cooking and serving meals.

But peer a little closer at the photo up top and you can see the pillow peeking out from an opening on the upper rear wall. That’s a glimpse of the upstairs bedroom, which comes courtesy of the roof-integrated tent that rises electrically at the push of a button to create a roomy living cube with views out large windows on all four vertical walls. The hard-roofed tent room also houses an 81 x 49-in (206 x 124-cm) double mattress, four ceiling fans and two ceiling lights.

The powered lift system creates the space to make the kitchen as tall as it is. The kitchen itself slides out of the narrow driver’s side cabinet as a single unit and swivels up to stand vertically. The front worktop then folds down and the upper doors swing open to reveal a spacious galley holding dishes, flatware, cooking utensils, dry storage containers and more. In fact, Bundutec stocks the kitchen as standard with everything you see pictured, including full place settings for six people.

The worktop accommodates a portable camping stove that can be hooked up to the onboard LPG system. The dual-burner stove pictured leaves plenty of space for food prep.

A dual-zone fridge/freezer slides out next to the main kitchen area, while the sink pops out of a storage bag on the front wall of the front storage box. The taps on the front of the box work with the collapsible sink basin that secures in the fold-out shelf, completing a simple, convenient sink area for washing dishes. It even includes slotted shelf space for drying.

A deployable passenger-side tent drops down from above. Called the BunduSuite, the tent works in conjunction with the BunduAnnex roof to create a bedroom annex that can be used as a private changing room or toilet tent.

Bundutec’s large 360-degree awning stores away over top the kitchen and swings out to throw shade over the kitchen, front and rear sides of the trailer. As shown below, it meets up with the BunduAnnex on the far side.

Bundutec advertises the option of 1,653-lb (750-kg) and 2,204-lb (1,110-kg) gross vehicle weight ratings (GVWRs). Once packed up, the BunduTrail drops down significantly, lowering the center of gravity and eliminating its high, broad sides to make for easier towing.

Bundutec, which is headquartered in South Africa and has a US branch, revealed the BunduTrail in South Africa ahead of a US showing at this month’s SEMA show. Its US website says that pricing will be announced soon. The folks at GearJunkie looked it over at SEMA and report it starts at US$28,000.

Watch the BunduTrail tow to camp and set up in the video below.