Robert Downey Sr put his son in wild underground movies and gave him access to drugs. So what happened when Downey Jr finally turned the cameras on his dad? 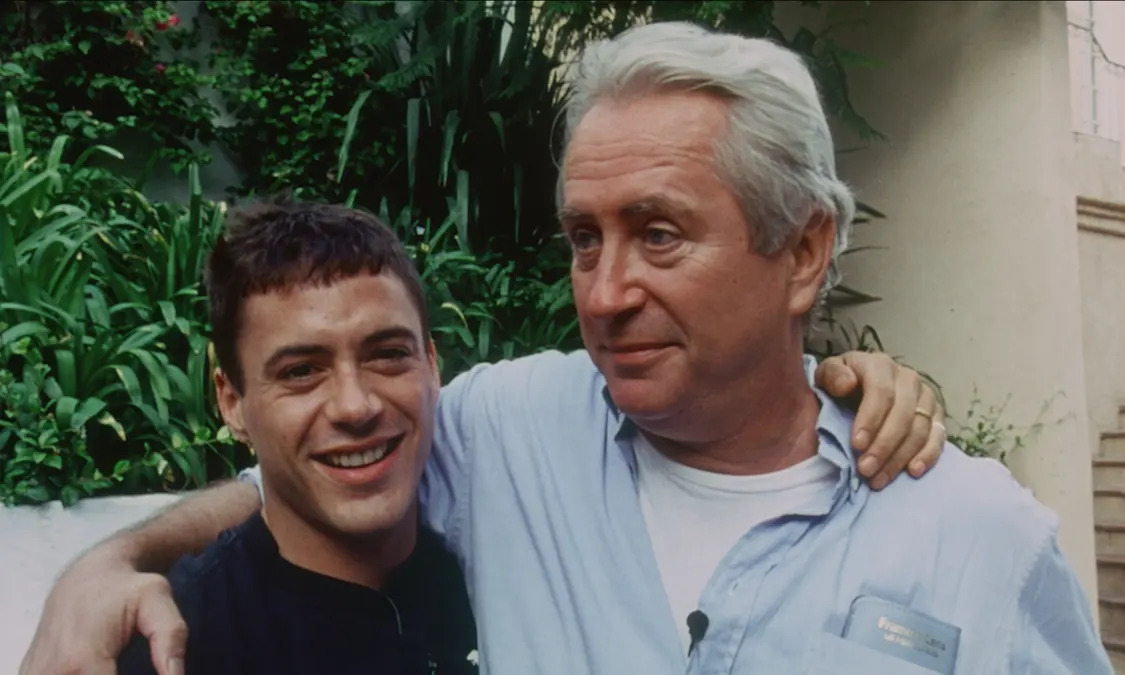 Andrew Pulver  @Andrew_Pulver
Last modified on 2022 Nov 29
–
In his father’s underground western Greaser’s Palace, a seven-year-old Robert Downey Jr plays, in his own words, “a boy who got his neck slit by God”. This, perhaps, explains a lot. Downey Jr grew up on Robert Downey Sr’s film sets in the 70s and 80s, amid what he calls “a cacophony of creativity”, at the heart of the counterculture cinema scene fuelled by “cigarettes and weed and booze”. He slept in a cot wedged against an editing desk, got taken to see X-rated films such as La Grande Bouffe at an absurdly young age, and went on a cross-country road trip as a kid where he “was in charge of the hash pipe”.

In the twilight of his father’s years, Downey Jr wanted some answers about why his father didn’t take better care of him. The resulting documentary – called Sr, with remorseless family logic – acts as part tribute, part therapy session and part last hurrah. “You,” Downey Jr tells his father, “did not give a mad fuck, did you?”

The elephant in the room of Sr is Downey’s turbulent period as a cocaine- and heroin-dependent young movie star (before he miraculously cleaned up his act to become at one point the world’s highest paid actor), and the extent to which Downey Sr may or may not be responsible for his son’s addictions. In fact, it’s the elephant in the room until it isn’t. Fifty-five minutes into Sr, Downey Jr, who spends a good part of the film gently grilling his ailing father over Zoom, addresses it directly: “I think we would be remiss not to discuss its effect on me.” Downey Sr, in his 80s and beginning to succumb to Parkinson’s, readily admits that the time he spent in Los Angeles in the 1980s as a heavy-duty cocaine addict himself was “15 years of total fucking insanity”, but he isn’t too keen to get into it again. “Boy, I could sure love to miss that discussion,” he mutters.

But no matter: we cut to an interview clip that looks like it was shot in the 90s, in which Downey Sr takes it on the chin. “A lot of us thought it would be hypocritical to not have our kids participate in marijuana and stuff like that,” he says. “It was an idiot move on our parts to share that with our children. I’m just happy he’s here.” Downey Jr is in shot too, and frankly doesn’t look well. The interviewer asks: “Were you ever worried he wasn’t going to be here?” With forthright honesty Downey Sr replies: “Many times.”
–

Over 30 years later, the situation is very different. Downey Sr is no longer with us; he died during the making of the documentary. Downey Jr is secure in his position in the Hollywood firmament, and now seemingly anxious to draw attention to his father’s film-making achievements. Downey Sr carved his path in the underground in the 60s and 70s with chaotic absurdist abandon. He made extravagantly berserk films such as the aforementioned Greaser’s Palace, in which a pink-hatted Jesus surrogate parachutes into the old west; the plot-free comedy Two Tons of Turquoise to Taos Tonight; and probably his best known film, the Black-Power-meets-Madison-Ave satire Putney Swope, released in 1969. Another of Downey Sr’s films, Pound, in which human actors play dogs waiting to be put down, features Downey Jr’s very first screen performances, as a five-year-old.

Arguably Downey Sr’s biggest fan is film director Paul Thomas Anderson, who cast him in small role as a recording studio guy in Boogie Nights, and of whom Downey Jr says, only a little sarcastically: “It’s no mystery that Paul Thomas Anderson is probably the son my dad wishes he had had.”

By the time Sr (the film) came to be, Downey Sr’s active film-making career was well in the past. His most recent credit was a 2005 documentary about Philadelphia’s Rittenhouse Square. But Sr shows, if nothing else, that the man had an unquenchable yen to direct, to the extent that he took the opportunity to commandeer Sr’s equipment and crew to shoot his own version of the same film. Sr’s actual director, Chris Smith, is known for filming tricksy subjects with their own agendas, in films such as Fyre: The Greatest Party That Never Happened, about the disastrous festival, and Jim & Andy: The Great Beyond, in which Jim Carrey method acted as Andy Kaufman. Smith generously incorporated elements of “the Senior cut” into the finished film, and in fact says that letting Downey Sr run with it made sense for everyone. “Had he not started doing his own version, it would have been a nightmare. He would have been all over us. It kept me outside of the crosshairs, so to speak.”

Smith’s co-cinematographer and editor Kevin Ford set up an edit suite in Downey Sr’s front room – and as he became more unwell, his bedroom. His allusive, eccentric directing style is readily apparent in the way he outlines what sequences he wants filmed. In contrast to what Downey Jr calls the “legitimate” documentary he is making, Downey Sr appears to be creating an impressionistic memoir, threading together meaningful memories and chance, unrepeatable improvisations. So he takes the camera crew to the Greenwich Village address where the family lived in a converted loft (now demolished and replaced with a Nutella cafe), and has Downey Jr leap out from behind a tree and sing the same Schubert lieder he performed as a 15-year-old in a talent contest. He visits an alleyway near the Bowery where, back in the 6os, he paid a hobo $50 to lie down for a memorable dance scene in Putney Swope. A random guy doing pull-ups on scaffolding or a bunch of mopeds bombing down a boardwalk are just as much grist to the mill.

Smith, an otherwise fairly laconic individual, says it was inspiring to watch Downey Sr at work. “It was very inventive, it was very loose.” But he adds that there was “a different set of criteria” at play. “[Downey Sr] said we would be unsuccessful if half the audience doesn’t walk out of the film.” And Smith remembers the interview they shot with actor Alan Arkin. “At one point in the interview, Alan gets up and says, ‘I want to go grab a kumquat.’ He walks over and he grabs one and comes back. In the Senior cut, that was the only piece used from that whole interview.”

Smith evidently didn’t entirely share Downey Sr’s perspective: there’s no kumquat shot in the “legitimate” version, and quite a few of Arkin’s affectionately waspish comments are kept in. (“I don’t know how he came up with his casting ideas … it was like he went down the Bowery half the time and just picked up people who were half in the bag.”) Smith says discussions are ongoing as to whether the full Senior cut will actually see the light of day.

In piecing together the varied strands, Smith faced a complex task: dipping in and out of the Senior cut as well as accommodating the father-son Zoom sessions, Downey Jr’s to-camera observations, archive clips of Downey Sr’s old films, and so on. “We wanted to embrace Senior’s looseness and his spirit. But also try to make something that functioned as a movie.” Smith says Downey Jr was initially very resistant to the film being about him … but then “things evolved and changed”. Partly due to the still-complex relationship between father and son, with much apparently needing to be said, and partly due to Downey Sr’s advancing Parkinson’s. “It sort of morphed into this film about fathers and sons and a meditation on life in general.”

For Downey Jr, there’s undoubtedly a therapeutic dimension to the documentary. In fact, we even listen in on a session he has with his therapist in which they discuss his father’s impending demise. For Downey Sr we can’t be so certain, but his wife, author Rosemary Rogers, says in the documentary that working on it “was energizing and exciting” for him. “With Parkinson’s you lose a little bit of something every day, but he’s fully focused on the film. It’s everything for him.” Smith says Downey Jr was very trusting and, while Downey Jr and his wife, film executive Susan Downey, acted as producers on the project, he had little interference. “I took notes from them, for sure, but believe me, if there were issues I’d tell you.”

Downey Sr died in July 2021, shortly after finishing his cut. Downey Jr filmed a final interaction with him and his own son, Exton. Smith also got to incorporate a little of the informal tribute the Downey family held for the late patriarch. Downey Jr has his documentary/memorial, and Smith is grateful to have been in the right place at the right time. “I think everyone just felt happy and blessed and fortunate that we were able to preserve and capture a little bit of the life force that surrounded this person. I think that was such a gift. We were just lucky to be there at the right time.”

This discussion is closed for comments

Impossible to avoid drawing parallels with Shia LaBouef’s childhood as portrayed in Honey Boy (worth a watch). So many variables involved in relationships with parents. And the only variable we each control is our part in the relationship over time. Taking ownership of that seems to me (and definitely was in my case) the key to moving forwards more productively.

In the film Captain America: Civil War Robert Downey Jnr’s character uses a technology called BARF to re-enact his final interactions with his dead father, and thereby attempts to lay to rest some of the issues he has stemming from his parents’ death. Therefore, this film is in a sense, RDJ’s own BARF technology.