Indiana Jones and the Dial of Destiny, in theaters June 2023, sees Harrison Ford reprising his role as the hero archaeologist. 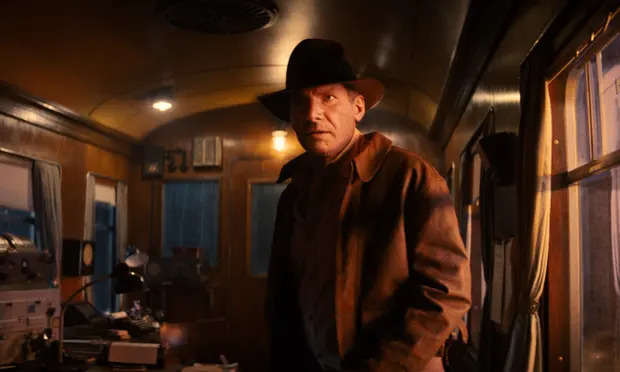 Harrison Ford in a trailer still from Indiana Jones and the Dial of Destiny.  Photograph: Lucasfilm Ltd.–

Adrian Horton  @adrian_horton
Last modified on 2022 Dec 01
–
Indiana Jones will return to the big screen, with Disney revealing a new trailer and title – Indiana Jones and the Dial of Destiny – for the hero archaeologist’s fifth adventure.

The first trailer for the film, due 2023 Jun 30, features Harrison Ford once again reprising his role as the death-defying scientist and at times digitally de-aged to appear as he did in his glory days.

The fifth installment of the franchise is set in the 1960s, during the height of the Space Race between the US and the Soviet Union. The trailer opens with Jones in high-octane adventure mode, jumping between tuk-tuk cars and shooting a gun while riding a motorcycle. “I don’t believe in magic, but a few times in my life I’ve seen things. Things I can’t explain,” he narrates over first glances at villains played by Mads Mikkelsen and Antonio Banderas. Fleabag’s Phoebe Waller-Bridge also appears as his goddaughter Helena.

The role of writer and director, previously filled by George Lucas and Steven Spielberg, has been taken up by James Mangold, the filmmaker behind Ford v Ferrari and Logan. Spielberg helmed the four prior entries: Raiders of the Lost Ark, Temple of Doom (1984), The Last Crusade (1989) and The Kingdom of the Crystal Skull (2008). Both Spielberg and Lucas serve as executive producers.

John Williams, who has scored for every Indiana Jones movie since Raiders of the Lost Ark, will return as composer.

Ford, who is 80, has said Dial of Destiny will be his final outing as Indiana Jones. “We have a really human story to tell, as well as a movie that will kick your ass,” he said during a Disney convention in September. “This is it! I will not fall down for you again.”