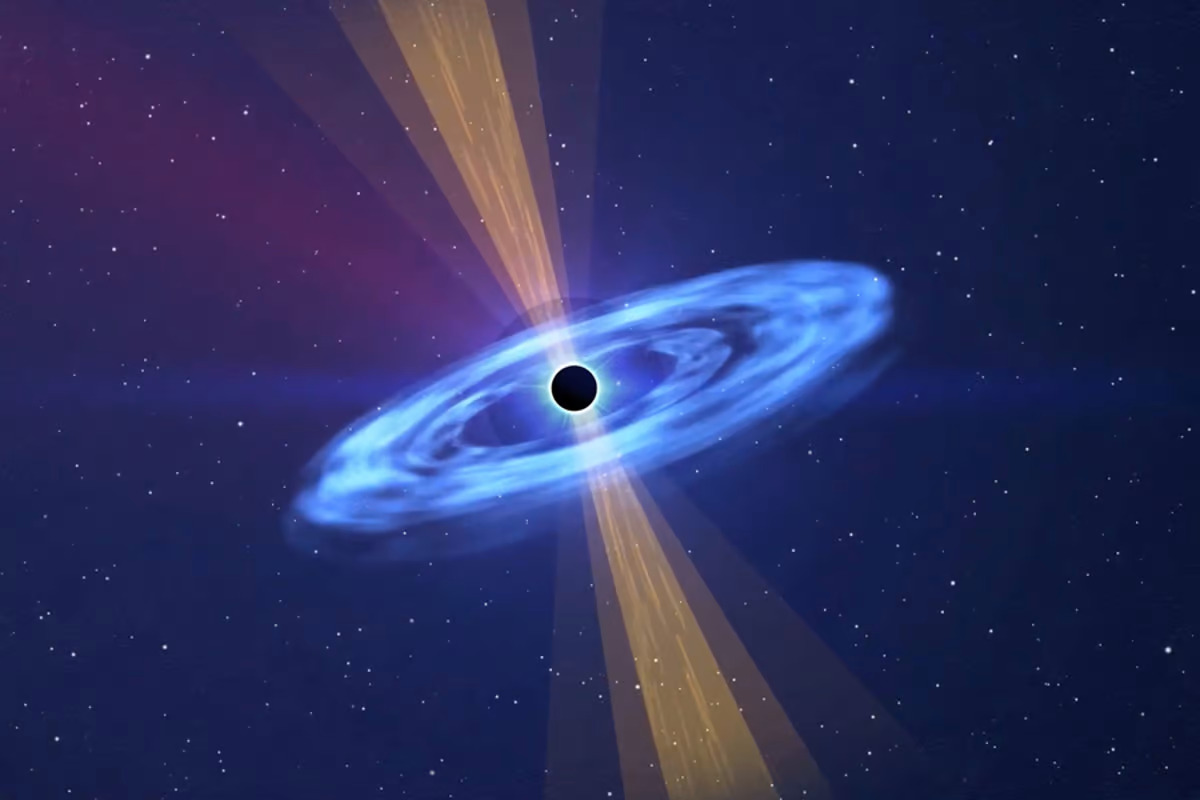 An artist’s impression of a black hole producing jets, which are believed to be responsible for an extremely bright flash of light detected by astronomers. Dheeraj Pasham, Matteo Lucchini, and Margaret Trippe
–

By Michael Irving
2022 Dec 01
–
Astronomers have spotted an incredibly bright flash of light beaming halfway across the universe. The strange light was estimated to throw off more light than one quadrillion Suns, and in an ironic twist came from one of the darkest objects possible.

The Zwicky Transient Facility (ZTF) is an observatory that watches large swathes of the sky at once, keeping an eye out for transient events – pulsing lights like supernovae or moving objects like comets. And on February 11 this year it spotted an absolute doozy, as an incredibly bright spot of light flared up in an area where there’d been nothing the night before. Astronomers roughly calculated that it was brighter than a quadrillion Suns.

Over the next few days, telescopes from all over the world were trained on the light, studying it in X-ray, ultraviolet, optical and radio, to find out what could possibly be throwing off that much energy. And in a new study, scientists report the most likely candidate.

The signal, known as AT 2022cmc, seems to have originated from a black hole located about 8.5 billion light-years away. In what’s called a tidal disruption event (TDE), this supermassive monster has devoured an unlucky star that wandered too close, flinging some of its matter away to form a burst of light. While TDEs have been observed plenty of times in the past, this is the brightest and most distant one ever detected.

So how did it get so bright? Some TDEs can form relativistic jets – matter from the dying star is thrown into powerful beams and accelerated to 99.99% of the speed of light. When these jets just so happen to be pointing directly at Earth, they can appear much brighter than usual. That’s thanks to the Doppler effect, where wavelengths of light are pushed closer together as they approach a viewer.

But even that isn’t enough to explain the extent of this unprecedented brightness, the team says. The black hole must be in the midst of a hyper-feeding frenzy.

“It’s probably swallowing the star at the rate of half the mass of the Sun per year,” said Dheeraj Pasham, co-author of the study. “A lot of this tidal disruption happens early on, and we were able to catch this event right at the beginning, within one week of the black hole starting to feed on the star.”

The team says that more TDEs are expected to be observed in future as more powerful telescopes begin scouring the skies more regularly.

The research was published in the journal Nature Astronomy. The team describes the work in the video below.
–