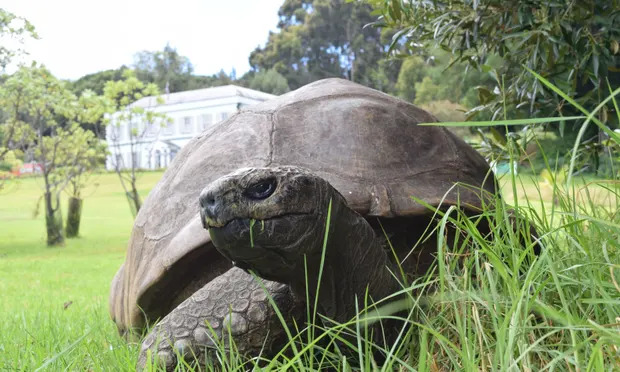 Jonathan on the grounds of Plantation House, home of the governor of Saint Helena. Photograph: PA

Last modified on 2022 Dec 02
–
If there is a party animal at large this weekend, Jonathan is it: the Seychelles giant tortoise is about to celebrate his 190th birthday with a three-day bash.

Living on Saint Helena since 1882, when he arrived as a gift to the governor of the small south Atlantic island, he is no stranger to fame, having scooped awards from the Guinness World Records for being the oldest known living land animal and the oldest chelonian – an order comprising tortoises, turtles and terrapins – ever recorded.

He has also been at the heart of romantic intrigue: after a period of irritability, Jonathan was presented with a mate in 1991 with whom he happily developed an intimate relationship. But 26 years later the lack of offspring was explained when his amorous partner – Frederica – turned out, upon inspection, to be a male.

Jonathan is also something of a local celebrity: as well as being a famous attraction he has featured on the reverse of the local five-pence coin.

While Jonathan has long been covered in wrinkles, he is now also blind with cataracts and lacks a sense of smell. Although his precise date of birth remains unknown, estimates suggest he hatched around 1832. But it was only in November this year that he was finally granted an official birthday, of 4 December 1832, by Nigel Phillips, the governor of the British overseas territory.

The Guinness World Records noted: “Jonathan’s age is an estimation based on the fact that he was fully mature, and hence at least 50 years old, when he arrived in Saint Helena from Seychelles in 1882. In all likelihood, he is even older than we think.”.

His age means Jonathan was a youngster when Queen Victoria came to the throne and has more recently witnessed the dawn of the technological age.

However Jonathan did not meet Saint Helena’s most notorious resident; the French general Napoleon Bonaparte arrived on the island in 1815 and died there six years later.

The three-day party bringing together residents from across the island will start at the governor’s house on Friday, with highlights including a tortoise-friendly “birthday cake” and an animated video about his life.

He will even enjoy nibbles and a chat with the governor and his wife, Emma, while those who attend the celebrations will receive a special certificate, be able to buy Jonathan-related stamps, and see the winners of an art competition launched to celebrate the famous reptile.

Sign up to Down to Earth – Free weekly newsletter

The planet’s most important stories. Get all the week’s environment news – the good, the bad and the essential