City’s police department prohibited from using the 17 robots in its arsenal for lethal force after board of supervisors vote. 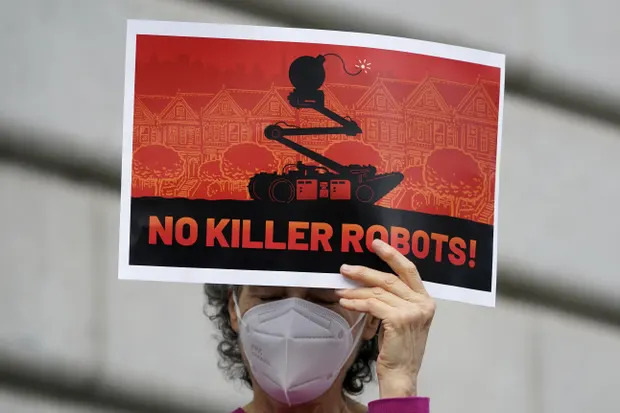 A woman holds up a sign while taking part in a protest about the use of robots by the SFPD. Photograph: Jeff Chiu/AP –

The city’s board of supervisors voted to explicitly prohibit the San Francisco police department (SFPD) from using the 17 robots in its arsenal to kill people. The board, however, also sent the issue back to a committee for further review, which means it could later decide to allow lethal force in some circumstances.

The U-turn came after the majority of members on the 11-person board had voted last week to allow robots to be armed with explosives and use them to kill people “when risk of loss of life to members of the public or officers is imminent and outweighs any other force option available to SFPD”. The board had also added an amendment saying that only high-ranking officers would be allowed to authorize deadly force.

The initial decision to allow “killer robots” was met with widespread criticism from civil rights groups and has shone a harsh light on the increasing militarization of US police forces.

Supervisors and police officials who had originally supported the use of lethal force had said the robots would kill people only in extraordinary cases, such as suicide bombing or active shooter situations.

Hilary Ronen, one of three supervisors who originally voted against deploying killer robots, said at last week’s meeting: “I’m surprised that we’re here in 2022. We have seen a history of these leading to tragedy and destruction all over the world.” After Tuesday’s reversal, she tweeted: “Common sense prevailed.”

The new policy does allow SFPD to use robots for situational awareness, such as sending the equipment into dangerous situations while officers stay behind.

On Monday, supervisor Gordon Mar tweeted that he regretted voting in favor of lethal robots and said he’d be switching his position: “Even with additional guardrails, I’ve grown increasingly uncomfortable with our vote & the precedent it sets for other cities without as strong a commitment to police accountability. I do not think making state violence more remote, distanced, & less human is a step forward.

“I do not think robots with lethal force will make us safer, or prevent or solve crimes,” he added.

San Francisco police have a controversial history of using lethal force against civilians, and one former officer is now facing manslaughter charges for an on-duty killing.

The SFPD did not immediately respond to a request for comment.