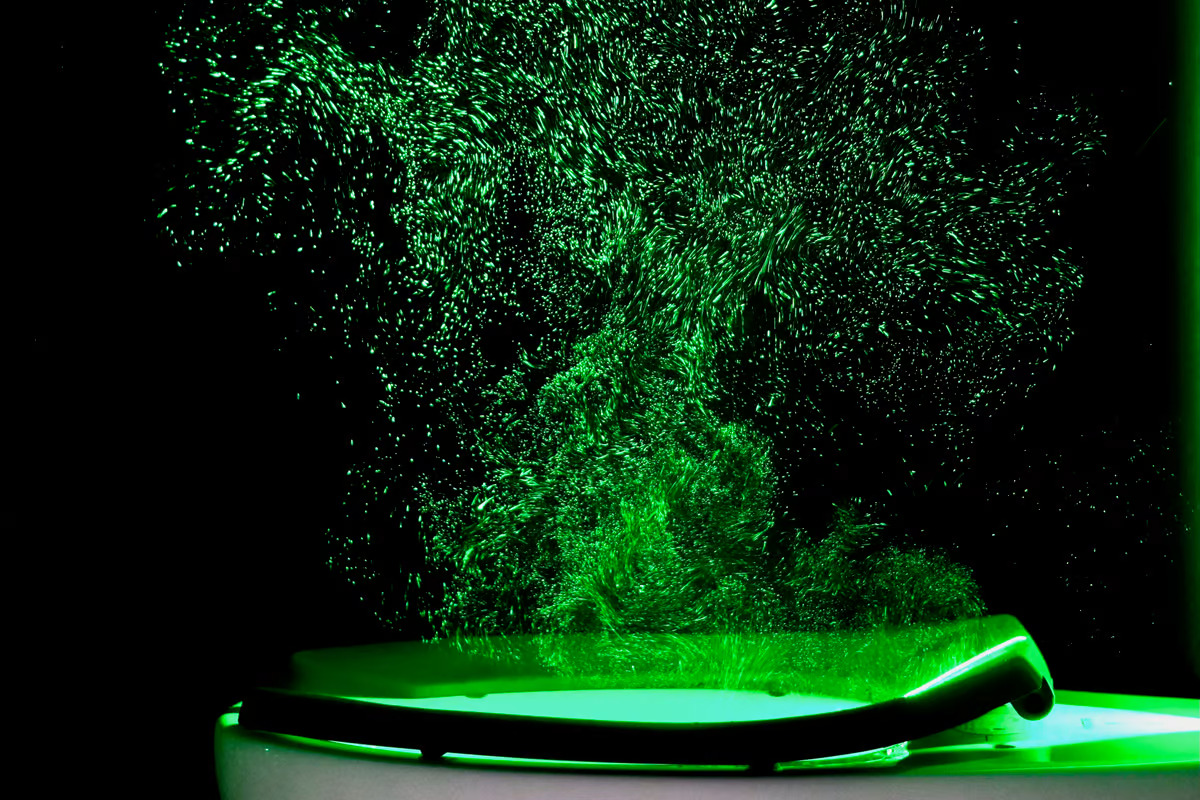 Although the toilet used in the study just contained clean tap water, such would not be the case in a real-word flushing scenario.  John Crimaldi
–

For at least 60 years now, it has been known that if you flush a toilet with its lid up, a plume of aerosolized toilet-water droplets will rise up out of the bowl. Those airborne droplets can then drift onto other surfaces in the bathroom, potentially spreading pathogens such as E. coli bacteria.

So far, we’ve only known about this phenomenon via studies in which scientific instruments detected the presence of those droplets. Now, however, researchers at the University of Colorado-Boulder have gotten some rather unsettling pictures of it.

Led by Prof. John Crimaldi, the scientists started out by setting up a brand new lidless toilet, of the type commonly used in North American public restrooms. It was connected to a conventional flushing mechanism, and filled with clean tap water.

Two green lasers were then aimed on and above the toilet. One shone continuously, in order to show where in three-dimensional space the droplets were located, while the other laser rapidly pulsated, to measure the speed and direction of their movements. Two cameras recorded HD stills and video while the toilet was flushed – and the result was much more dramatic than anticipated.

“We had expected these aerosol particles would just sort of float up, but they came out like a rocket,” said Crimaldi.

For the most part, the droplet plume moved upward and back towards the lab’s rear wall. That said, much of it also rose straight up until it was blocked by the ceiling, at which point it spread forward into the room. And importantly, when the size of the droplets was measured using a device known as an optical particle counter, it was found that the smallest – which remain airborne for the longest – were small enough to evade a person’s nose hairs and make their way into the lungs.

It’s also worth noting that the experiment was conducted in an open, relatively empty space, free of bathroom stall walls and people moving around. Crimaldi believes that the presence of both could make the problem worse, facilitating dispersal of the droplets.

It is now hoped that by being able to visualize the plume in this fashion, the problem can be better addressed moving forward … and hopefully also, people who see the images will be more motivated to put the lid down when flushing at home.

“Our methodology could be used to evaluate new toilet bowl and flush valve designs that reduced the upward ejection of aerosol particles while still remaining effective at flushing waste downwards,” Crimaldi told us. “The methods could also be used to evaluate new ventilation and UV disinfection systems that could reduce exposure risk to plumes that are ejected.”

Shining a light on what comes up when you flush
–

Ben Coxworth
Based out of Edmonton, Alberta, Canada, Ben Coxworth has been writing for New Atlas since 2009 and is presently Managing Editor for North America. An experienced freelance writer, he previously obtained an English BA from the University of Saskatchewan, then spent over 20 years working in various markets as a television reporter, producer and news videographer. Ben is particularly interested in scientific innovation, human-powered transportation, and the marine environment.
–
–
1 comment
Sign in to post a comment.
Please keep comments to less than 150 words. No abusive material or spam will be published.
Jim Powell – 2022 Dec 08 – 07:49 PM

From the picture, it seems that the water supply comes from a least 2 meters. The experiment should be repeated with a low head of water as per a normal cistern
–